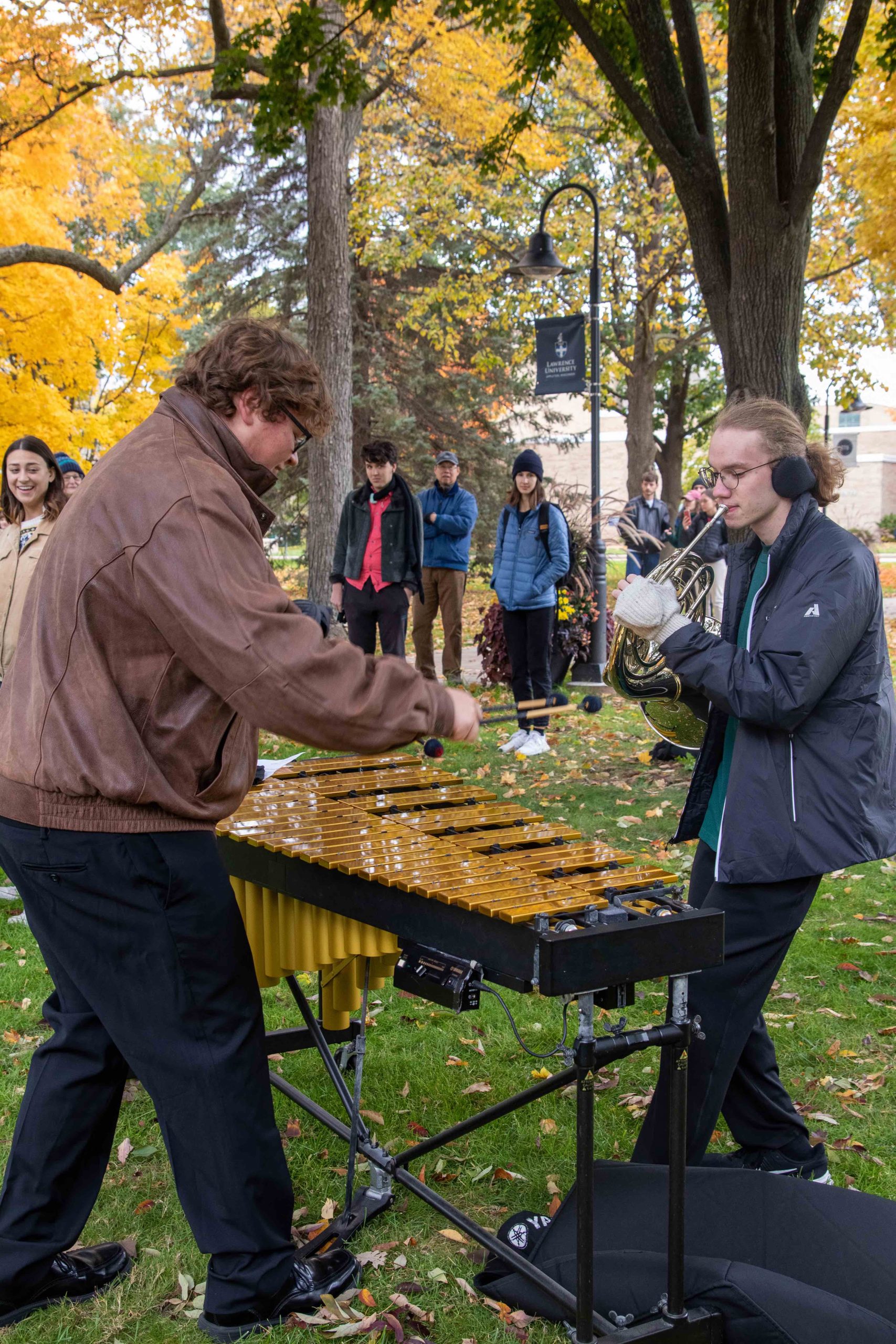 A word of advice if you plan to attend an outdoor event in Wisconsin in mid-October: bring a hot beverage and a winter coat! Though I brought neither, underestimating just how cold it would be, I still enjoyed the performance of John Luther Adams’ “Ten Thousand Birds” on Oct. 16th on Main Hall Green.

“Ten Thousand Birds” is a contemporary musical composition that was premiered by the new music ensemble Alarm Will Sound in 2014. The piece incorporates the songs of birds that are native to or migrate through the area in which the piece is performed. The piece is modular, with the possibility to combine different sounds in different ways, rather than having a single way it is always performed.

The version of this piece that the Lawrence University New Music Ensemble (LUNME) performed was an hour-long interpretation designed by Alan Pierson of Alarm Will Sound. LUNME’s performance was directed by Visiting Assistant Professor of Music in Entrepreneurial Studies and Social Engagement Michael Clayville, who is also a founding member of Alarm Will Sound.

The composer, John Luther Adams, is a former environmental activist, and his composing is motivated by “a deep concern for the state of the earth and the future of humanity.” In “Ten Thousand Birds,” a work that is specifically intended to be performed outside, Adams “employs music as a way to reclaim our connections with place.”

Choreography and use of space were crucial elements of the performance of this piece. As the performance began, members of LUNME, which includes string instruments, brass instruments, woodwinds, percussion and piano, arranged themselves in a circle in the center part of Main Hall Green.

The music started softly, and audience members who had been scattered across the green moved closer to the circle to hear it, but there was still a separation between performing space and audience space, as no audience members entered the circle. As the performers began to disperse, spreading out across the green, audience and performing space merged, and the performance became immersive.

Before attending this performance, I really didn’t know what to expect from the piece. I wasn’t sure if it would sound like any musical composition I had heard before, or if it would be a collection of sounds that mimicked nature but were more isolated and didn’t necessarily have a specifically musical intent.

In my experience of the performance, the sounds did seem to intentionally come together like a musical piece. Some of the motifs were melodic, and as different instruments repeated similar melodies to each other from across the green, the effect was of a musical conversation between birds, blending the natural with the musical.

While much of the music was melodic, some instruments, such as the woodblock percussion, contributed to a more nuanced texture, facilitating the blending of the ensemble with the environment in which they were playing and making the music sound more natural.

The musicians imitated birds not only in sound but also in movement. At one point, various musicians flocked around a timpani, running around it and then scattering in various directions while playing. In another moment, cellists and double bassists stood in a cluster as violinists repeatedly circled around and between them.

In other parts of the piece, individual musicians playing different instruments would spontaneously run or hop towards each other or towards audience members, staying for a few moments to play directly next to the person they had run towards and engage with them playfully.

As the performers moved throughout the green, so did the audience. Unlike a typical musical event, in which audience members sit silently in one place for the entire performance, here we were able to walk around, and some audience members spoke softly to each other without disrupting the performance. The sound of our shoes scuffling through the fall leaves subtly added to the music.

As I walked around the green, I heard different parts of the musical texture louder or softer depending on where I was. While the sounds of many of the instruments carried across the green, some, like the pianos, were quieter and were easiest to hear when walking directly by them.

At any given time in the performance, multiple instruments were playing, but there were ebbs and flows in the number of instruments playing at once, and not every musician was playing the whole time. This gave musicians the opportunity to participate in the performance as both performers and audience members, another way in which the line between these was blurred.

As the hour-long musical experience came to an end, the musicians again gathered in a circle, and the audience began to applaud as the music faded away. Throughout the performance, I was grateful for this reason to be outside, away from screens, connecting with nature and with my fellow Lawrentians and Appletonians through music. With a stressful sixth week of the term ahead of me, “Ten Thousand Birds” provided a necessary opportunity to relax and concentrate on my surroundings in the present.