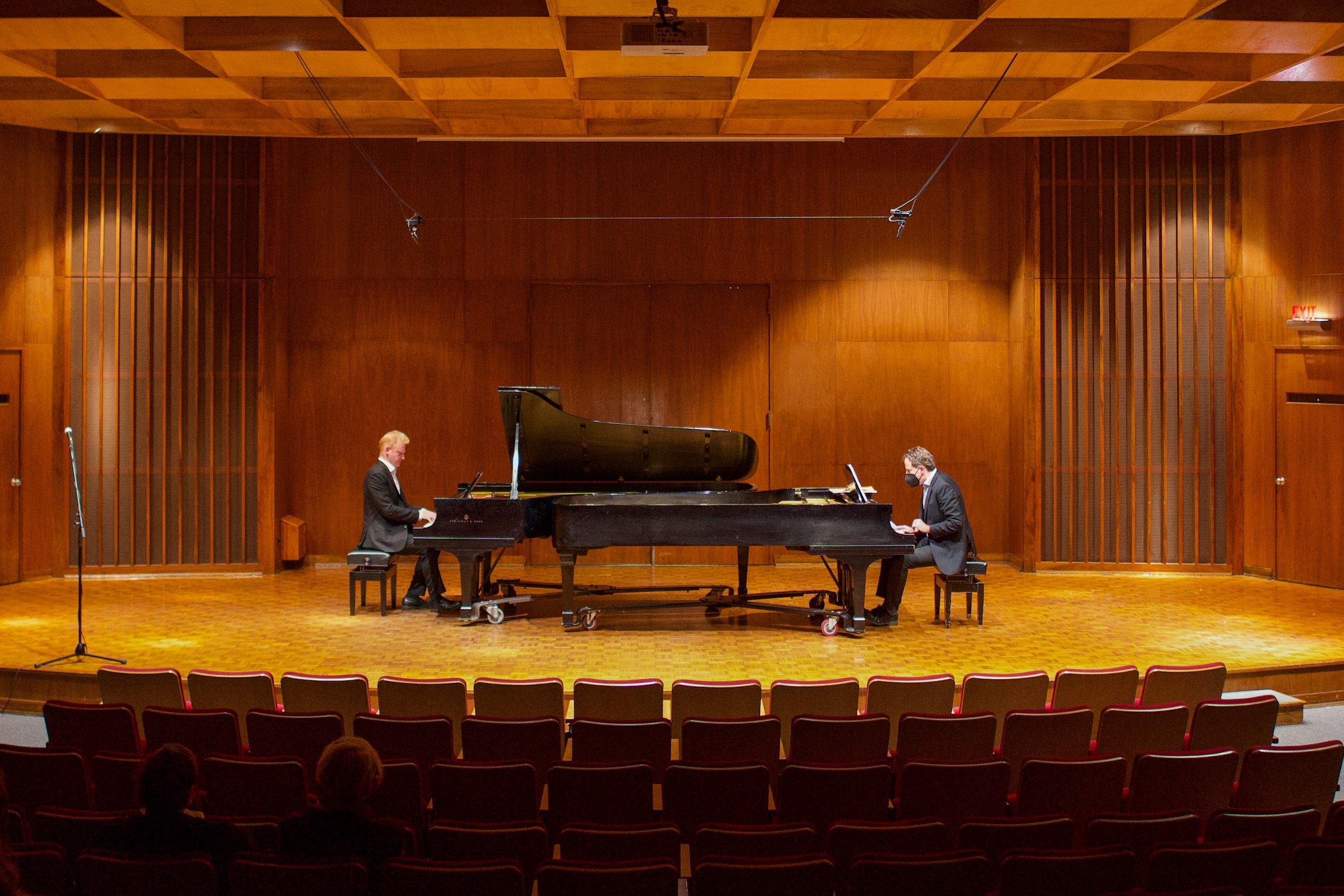 Guest pianist Steven Beck gave a performance of all five piano sonatas by African-American composer George Walker (1922-2018) in Lawrence’s Harper Hall on Wednesday, Nov. 2. Beck is a versatile performer who has appeared as a soloist and chamber musician with a wide array of orchestras, dance companies and other ensembles. Beck’s recording of the complete George Walker piano sonatas, released this year, is the first time the full set has been recorded by one person on the same disc.

Walker’s piano sonatas were composed over a 50-year period, from 1953 to 2003. Beck began his recital with Walker’s fifth and final sonata, a short piece in one movement. This sonata dove right in with dissonant, almost eerie chords that covered much of the piano’s range. Despite the counterintuitive harmonies, Beck played the piece with a clear sense of direction and a feeling of self-assuredness throughout.

The piece alternated between various characters; at times, gentle passages gave the piece a contemplative feeling, while at other points, strong chords, often in patterns from the extreme lows to highs of the piano, made it seem emphatic or even frustrated. The piece came to a delightfully, surprisingly abrupt end with two short chords in the lower range of the piano.

Next, Beck performed Walker’s Piano Sonata No. 3, composed in 1975 and revised in 1996. The first movement of this sonata was “Fantoms,” which again made use of the piano’s full range with playful, sometimes fluttery or almost dancelike bursts of scattered notes, as though ghosts were appearing in different locations.

In between these bursts, a recurrent motif appeared in which a single note was repeated in a particular rhythm, which I imagined as a ghost knocking on a door. At other times between the bursts, a single note or chord would be sustained. In these moments, Beck made use of the pedal and of the space of the hall to let these notes emanate over the audience and allow us to feel the emotional resonances in them.

The second movement of this sonata was “Bell,” which consisted entirely of one dissonant chord repeated with various dynamic levels and colors. The chord was sometimes allowed to decay before it was sounded again, but sometimes it was played again almost immediately. It was surprising to me how evocative a piece consisting of a single chord could be – it reminded me of the concept of weltschmerz, a feeling of depression caused by comparison of the actual state of the world with an ideal state.

The final movement of this sonata was “Choral and Fughetta.” This movement began with staccato chords that contrasted the sustained nature of the previous movement. As it continued, there was a dreamy section in the upper range of the piano, followed by a march-like section and punchy chords in the lower range, before the piece ended on a single sustained note.

The third piece of the program was Walker’s two-piano arrangement of his second sonata, composed in 1956, for which Beck was joined by Lawrence’s Frank C. Shattuck Professor of Music Michael Mizrahi, a longtime friend and colleague.

Beck noted that Walker studied with the same composition teacher as Samuel Barber and drew comparisons between Walker’s early sonatas and the harmonic language and “passionate quality” of Barber’s compositions. In contrast, he described the later sonatas as “plain chant for the piano,” highlighting the inconsistent lengths of measures and the texture of “punctuated” melodic continuity.

The first movement of the second sonata was a theme and variations. Overall, there was a sense of wistfulness to it, but the movement covered a whole spectrum of characters, from bold and intense to slow and somber to light and bouncy. At times, the two piano parts went back and forth in conversational exchanges, like a playful competition.

The second movement had a bustling character that was sometimes rough and boisterous, with a frivolous ending. The third movement was lyrical and somber, reminding me of a funeral march or an elegy, although bright chords did sometimes protest against this darkness. The final movement of this sonata was energetic and joyful, with unending flurries of notes.

After a brief intermission, Beck played Walker’s first piano sonata. The first movement of this sonata featured contrasting characters, sometimes determined and insistent, and sometimes more spontaneous or whimsical, but always with a sense of constant motion.

The second movement was a brief set of variations on a sentimental, song-like theme, while the final movement came across as a frantic dance, with motifs that sounded like alarms going off.

Finally, Beck performed Walker’s fourth sonata, completing the set. During the first movement, marked “Maestoso,” I imagined myself walking through a forest. Heavy clashing chords were trees looming above me, while trilling figures were butterflies. Perhaps some of the fast-moving passages were creeks, and the unassuming, meandering patterns in between were my own footsteps.

The second movement of this sonata was relaxed and meditative at the beginning, but a rapid, dissonant passage emerged from this atmosphere, creating a contrasting sense of anxiety or even impending doom that dominated much of the movement before eventually returning to the original character and then ending by fading into the mist.

To conclude the recital, Beck was again joined by Mizrahi, this time for Jamaican composer Eleanor Alberga’s Two-Piano Suite, a composition that was written to commemorate the anniversary of Jamaican independence and which was correspondingly celebratory in mood. The piece brimmed with cheerful excitement, incorporating syncopation and characters that varied from improvisatory to grandiose.

Overall, Beck and Mizrahi’s recital was one I was glad to attend. It acquainted me with the varied but cohesive set of works by George Walker, a composer with whom I had little familiarity, and I appreciated how deliberate and precise decisions in voicing, pedaling and phrasing brought their interpretations of these pieces to life.