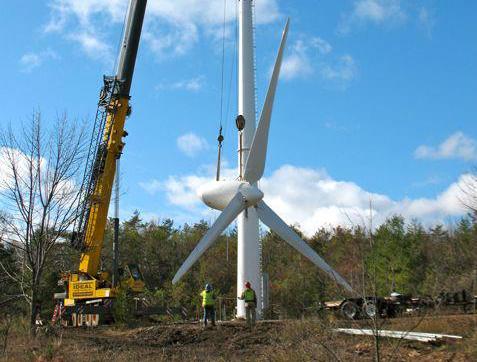 A new wind turbine was installed at Lawrence University’s Björklunden campus Thursday, Oct. 26. The turbine is expected to start up within the next few days.

During the winter of 2009, Steven Schnorr, a senior working on a senior experience project with Assistant Professor of Government and Stephen Edward Scarff Professor of International Affairs Jason Brozek, did a study to determine the feasibility of such a project.

Schnorr discovered that the project was possible and, though it would take a large amount of capital to complete, the turbine would be able to provide 20 to 30 percent of the power for the Björklunden lodge.

From there, the project went to Green Roots, Lawrence’s campus sustainability organization, which shepherded the project through the process of applying for grants and rebates, fundraising and, eventually, working with contractors and Facility Services in the construction of the turbine itself.

The turbine cost a total of $370,000. $200,000 came from grants from Focus on Energy, a government conservation group, and Wisconsin Public Service, the energy provider for Door County. The rest of the capitol was donated privately, mostly by alumni, as part of the More Light! campaign.

“It’s worth realizing,” said Brozek, a Green Roots committee member, “that this project was the result of lots of people interested in sustainability coming together and sharing what they were able to contribute. Students shared their passion in hands-on projects, alums donated, Facility Services helped build the turbine. This was really a joint effort that everyone’s had a hand in, and I think that’s fantastic.”

The turbine, according to Brozek, will cut the energy costs on average at Björklunden by 30 percent per year. It is over 100 feet tall and not visible from the lodge itself, though it can be seen from the highway.

“We have this fabulous turbine,” said Associate Vice President of Alumni and Constituency Engagement Mark Breseman, director of Björklunden, “and we don’t want to hide it, but we also don’t want it in people’s faces, or for it to affect the lodge guests.”

120 feet of the turbine’s height is the main pole, and the other 30 feet comprise the enormous blades that will circulate on top starting sometime this week.

“This turbine is a hugely positive thing for Lawrence,” Breseman stressed. “And the most exciting thing about this project is that this could be just the first step in a more complete sustainability project for the whole college. If the turbine shows to be an effective way to cut energy costs, maybe we could use wind power on the campus itself.”

The sustainability aspect of the turbine was not something that either Brozek or Breseman could over-emphasize. “I’m of course excited about the energy that it’s providing and the carbon it’s offsetting,” said Brozek. “But I’m most excited about how it represents a real public commitment to sustainability.”

It is not just the Lawrence community that promotes the idea of sustainability. Breseman, who has been checking in on Björklunden throughout the building process, said, “The people in Door County that have heard about what we’re doing have been very excited that we’re moving into using wind energy.”

One of the largest benefits of the turbine, according to both Breseman and Brozek, is educational. The data from the turbine will be remotely accessible not only to lodge guests but also to students in environmental classes, just as current students are already able to monitor the solar panels on campus buildings.

The turbine, said Breseman, will create “a teaching opportunity so that students can study the positive effects of wind-power.”

Brozek did not hide his enthusiasm or excitement about the final stages of this process. He commented, “Right now I’m waiting any day to hear that it’s operational. The last message I received from the contractor said that we’re just waiting for the subcontractor to finish up some work.” He concluded, “Any minute I’m expecting an email that says it’s begun.”