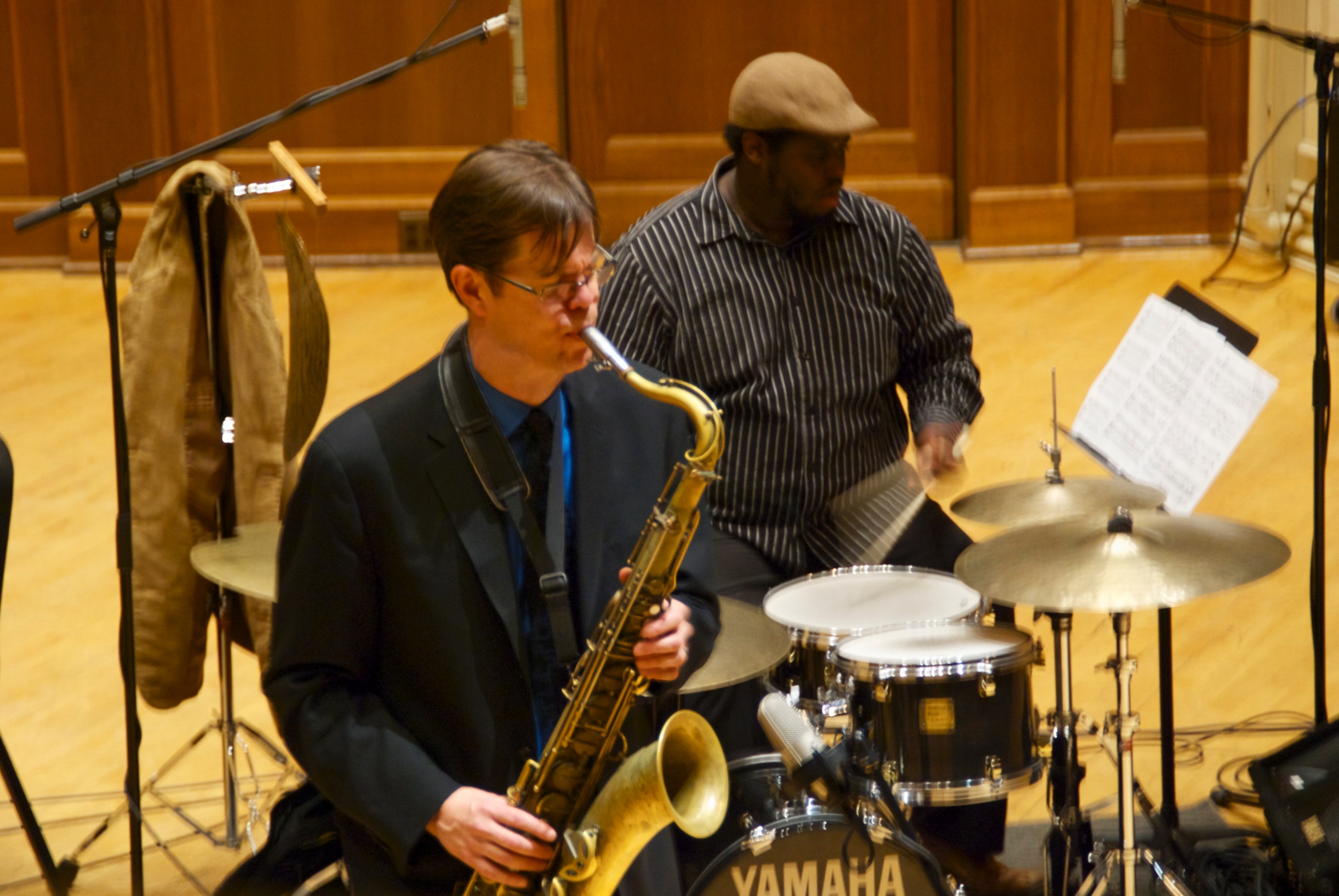 Last Friday evening, tenor saxophonist Donny McCaslin’s trio featuring Johnathan Blake on drums and Scott Colley on bass performed one of the more memorable concerts of this year’s Lawrence Jazz Series. McCaslin and his trio performed at the Lawrence Memorial Chapel for a fairly large audience, at least by jazz standards. The trio performed a variety of McCaslin’s compositions, but they mostly used these compositions as bases for more adventurous, extended improvisations.

McCaslin’s crew is capable of unleashing a torrent of energy through these improvisations, and they often sounded reminiscent of a 21st-century version of the John Coltrane Quartet. And perhaps even more impressively, McCaslin and company maintained this intensity while playing some truly beautiful compositions.

The trio’s raw and intense sound was largely a product of their sparse saxophone, bass and drums instrumentation. This instrumental grouping does not restrict soloists with piano comping, and it consequently lends itself to more experimentation. This freedom was clearly the case for McCaslin, Blake and Colley, and they frequently ventured far from the confines of musical form during extended yet captivating solos.

One challenge of not having a chordal instrument in the group — i.e piano, guitar or vibes — is that each musician becomes more exposed. However, the McCaslin trio seemed to reconcile this challenge by listening intently. The trio was almost eerily interactive and seemed to pick up on every musical nuance. This was especially true of McCaslin and Blake, who maintained a dialogue and listened sensitively, even while playing aggressively.

After the trio played the first couple tunes, McCaslin invited the Lawrence Brass — featuring the Lawrence brass faculty members — onstage to perform some of his brass ensemble arrangements. The brass players mostly played arranged versions of McCaslin’s melodies and laid out during the solo sections, allowing the trio to maintain a flexible and interactive dynamic without having to worry about supporting the brass players during the solo section.

The McCaslin Trio played only original McCaslin compositions throughout the concert; one of the best compositions the trio played was “Fat Cat.” McCaslin joked that he actually wrote the tune in honor of a New York jazz club, as opposed to an obese feline. “Fat Cat” began as a ballad, but a couple minutes into the tune, Colley and Blake began playing a fairly up-tempo groove.

After the band finished the melody, Colley launched into a bass solo, while Blake accompanied him. McCaslin then began his solo as Colley and Blake settled into a medium-tempo swing feel. The trio had mostly been playing complex and “modern” rhythms, so it was refreshing to hear some grooving, medium tempo swing. After McCaslin’s solo, the rhythm section locked into the initial groove and Blake played a characteristically awesome and heavily polyrhythmic drum solo.

McCaslin then introduced the final song of the night, “Rock Me,” and explained that sometimes “you just have to embrace your inner rock.” He hypothesized that the composition could be put on a saxophone edition of Rock Band.

The only downside of McCaslin’s concert was the trio’s initial acoustic balance. Acoustics are challenging in the chapel, and the room seemed to distort the trio’s sound for the first few minutes of the performance. However, the trio quickly adapted and managed to effectively control its energy and volume. The concert was fantastic overall, and it was as energetic and grooving as it was musical.