Cantala to perform at ACDA National Conference in Chicago 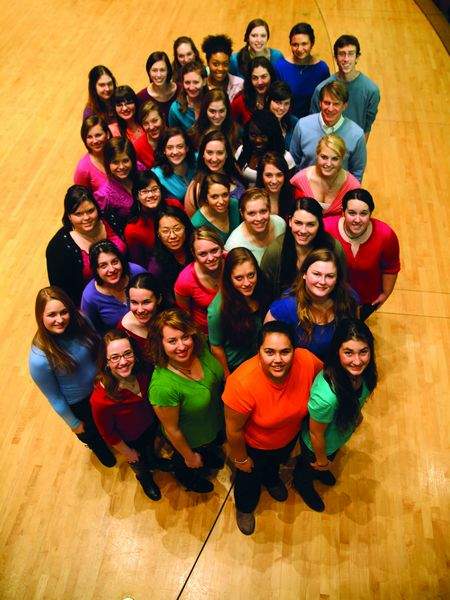 The conference, lasting four days, will feature concerts from about 42 choirs, interest sessions, exhibits and networking opportunities. The Chicago Symphony and Chorus, Helmuth Rilling and Chanticleer are just a few of the well-known names to appear on the program.

The American Choral Directors Association, or ACDA, “is a nonprofit music education organization whose central purpose is to promote excellence in choral music through performance, composition, publication, research and teaching,” according to the website’s mission statement.

Cantala’s opportunity to perform was based on a blind audition process that evaluated music from three consecutive years and was selected from a pool of about 500 applicants. In 2004, Cantala performed in Appleton for the State Conference and in Omaha for the 2006 Regional Conference.

“People know about the Lawrence Choirs, but they haven’t heard us,” said Associate Professor of Music and Associate Director of Choral Studies Phillip Swan, director of Cantala since 2002. “[ACDA] gives us the opportunity to be seen and heard at very high, prominent level.”

Cantala’s concert program, which was performed at the Feb. 26 choir concert, features three sections of stylistically varying selections. The first section, titled “Jekyll,” features traditional and stable pieces such as “Flos Regalis,” a 14th-century English work, and Brahms’ “The Harp Resounds with Wild Refrain.” The second section, titled “Hyde,” features more unstable and unpredictable works such as a Persian song, the second movement of “From Behind the Caravan: Songs of Hâfez.” The final section, titled “Seek,” features playful and childlike works such as “The Log Driver’s Waltz,” a tongue-in-cheek piece in the style of a folk song.

“[The program] shows our ability to sing in a variety of styles,” said Swan, who conceived of and created this three-movement program. “The stylistic variety allows us to show what we do on a regular basis.”

“Even though mostly freshmen and sophomores, [Cantala] takes being in the ensemble on as being a large responsibility,” said Swan about the choir’s strengths. “There’s also been a growth in the vocal timbre, quality and ensemble feel.”

“This is something I’ve always hoped we would be able to do,” added Swan. “I’m really proud of what they’ve done.”

Cantala President Jaclyn Kottman, who has been in Cantala all of her three years at Lawrence, said: “I think the biggest improvement with Cantala has been visibility in the conservatory, and its moving on to equal footing with other conservatory ensembles. Since my time here, Cantala has experienced great consistency in [the] improvement [of] our ensemble.”

Commenting on how it affects her as an individual, Kottman said, “Being asked to sing at ACDA [National Conference] is the highlight of any chorister’s career. But I think it’s phenomenal that we get to share that as a strong community and choir.”

“I think what’s so cool about Cantala is that it’s so much more than just making music,” added Kottman. “[Swan’s] whole style of doing things stems from us being a strong community, knowing and respecting each other as people and then making music out of those relationships.”