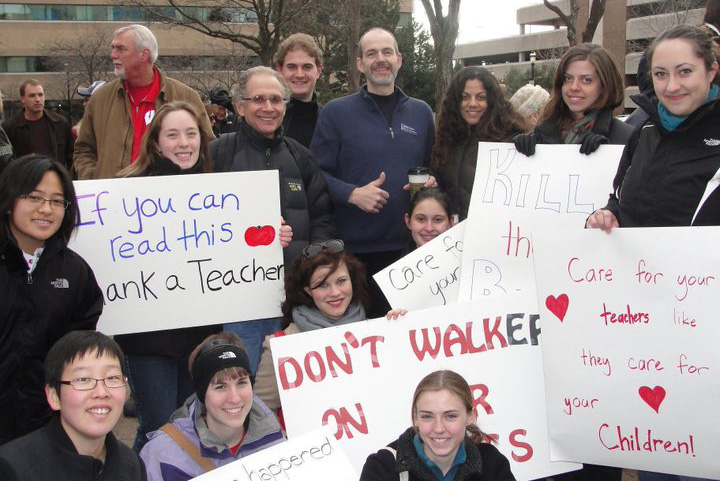 Lawrence students and faculty alike have been involved with both protesting and counter-protesting the budget repair bill proposed by Gov. Scott Walker.

The bill encompasses various proponents that would reduce the state’s $137 million deficit for the current fiscal year primarily by increasing the amount state workers would pay for pension and health care. Additionally, the bill repeals the collective bargaining rights of state employees, among other budget restructuring proponents, to avoid raising taxes.

The bill has gained media attention across the world largely because it has been deemed an attack on unions. The bill has already been passed by the state assembly, but is being held up in the state senate, where 20 senators are needed to pass the bill.

The state’s 14 Democratic senators are in hiding in Illinois to avoid participating in the budget vote, so the 19 Republican senators are unable to vote on the bill until the Democrats return. Although unions have agreed to the fiscal concessions of the bill, Walker will not agree to compromise on the issue of retaining collective bargaining rights.

Student events at Lawrence to protest the bill included a rally sponsored by LU College Democrats and a trip to the capitol building in Madison Tuesday, Feb. 22.

Senior Cecily McMillan was instrumental in bringing together Lawrence students to attend the protests on Tuesday at the state capitol.

“I’m really passionate about this issue because I think that collective bargaining is especially the only way for people to have a voice in the United States anymore,” McMillan said.

McMillan, a government and theater double major, wants to become a teacher union organizer or an educational policy maker.

“I have seen what has happened to people when they don’t have a union to support them,” McMillan said. “I have seen how people cannot thrive, how when they get hurt they have no way of getting back up.”

McMillan organized the Lawrence event “LU & UWGB Go To Madison.” The day began at 8 a.m. with a rally with Lawrentians and students from UW-Green Bay in front of the Chapel, where former congressman Steve Kagen and a union worker spoke to Lawrentians.

Afterwards, a bus paid for by McMillan took a group of around 30 Lawrence students to Madison. McMillan chose to pay for transportation to protest at the capitol based on student interest on the Facebook event she created earlier in the week. However, fewer students attended than expected. McMillan said she was extremely disappointed about the involvement of Lawrence students on the issue.

“I don’t care if it’s 8 a.m. — there are bigger things than your paper,” McMillan said. “This is the biggest protest of this sort in the history of Wisconsin, [and it gets students] really thinking about other people, and calling for individual citizens to use their voice.”

For the students that went to Madison on Tuesday, or who have been protesting throughout this week, the experience has been unforgettable.

“It was amazing; the amount of energy that’s down there right now is ridiculous,” said junior Kate Allison, president of LU College Democrats. “A lot of people would think that because [the protest] is out of anger toward the government that it’s an angry, violent energy but in actuality it’s a very positive energy, a lot of people banding together for the same cause.”

Allison attended the protests Tuesday in Madison, and was glad to see the support of Lawrentians at both the rally and the protests.

“It takes longer to get into these things because we’re in our liberal-arts-private-school bubble, and I’m guilty of it as much as everyone else,” Allison said. “To see Lawrentians finally getting wound up about [the protests] and feeling like we can go and do something about it — it’s good to see that positive, uniting energy coming from Lawrence.”

In addition to driving to the protest in Madison, Lawrence students have been involved in more local protests against the bill. The annual Republican President’s Day dinner was held at the Radisson in Appleton Monday, Feb. 21, and Lawrence students and other community members showed up to silently protest on College Avenue.

“Maybe there is a charm to the Lawrence Bubble, and maybe there’s an idea that it brings us together in a community,” McMillan said. “But if it gets to a point that we become so self-centered and so involved in this bubble that we ignore the voices going on outside of us — then what kind of citizen is Lawrence really teaching us to be?”