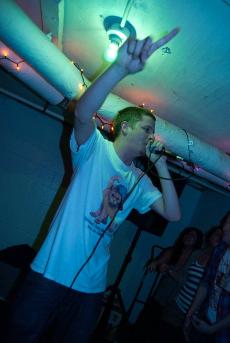 Hip-Hop Congress welcomed a motley crew of artists to campus this Saturday, Feb. 5. The show was held in Greenfire basement, a house known for hosting popular parties featuring Lawrence bands.
This concert marked HHC’s second event on campus; in the fall, HHC held a benefit concert in Esch Studio, which included performances by two Chicago-based visiting hip-hop artists.
Comparing the two events, HHC president Alex George said, “I definitely find house parties to be the ideal venue. Greenfire had such a great atmosphere, much more fun and festive than Esch. […] It’s a very electric atmosphere. More people tend to come to the house parties […] Hip-Hop Congress will […] very likely […] be teaming up with Greenfire again.”
The performances at Greenfire brought together a group of artists from Chicago somewhat familiar to the Lawrence campus. Montana Macks, a charismatic rapper and producer, was well suited in his role as an opening act, hyping the crowd with candid descriptions of drinking and light-hearted but technically impressive verses.
Macks has generally focused on beat-making, producing many tracks with Lawrence alumnus Rich Jones, but might want to give rhyming more of his time.
His memorable set was followed by Live Harder, a duo of Lawrence alumni who got right in the face of the crowd. The highlight of their performance was “The Executive House,” a loud and proud anthem chronicling their shenanigans in those two buildings before they became Lawrence housing. Live Harder fed off of their memories of Greenfire and Lawrence, and greeted the hometown audience with open arms.
The tribute sums up the atmosphere of the evening. All the performers were having fun with each other and loving the familiar vibe. Even those performers who were not alumni seemed comfortable and in their element. The partygoers clearly loved show, too, and the result was one excellent party.
This communal feeling permeated Rich Jones’ set. He invited two current Lawrence seniors, Isake Smith and Jake Hartmann, to perform alongside himself and his Second City crew. The enthusiasm was so great that the audience was continuously told to step back and give the performers some room to breathe.
Not only did the performers regularly invite the audience to sing back verses, but Rich Jones actually handed off the mic to audience members to sing the hook to his song “Back Then.”
During this set, the power went out, causing Second City Citizens to have to rhyme a capella and get the crowd going with an impressive freestyle. Partygoers eagerly worked together to find the outlets in the dark and reconnect the power. The group handled the problems well and left the audience with a great show.
As the Minnesota MC Prof was about to take the stage, the technical problems continued. The power went out again and Prof – clearly frustrated – told the hosts that if they couldn’t get things working properly soon, he would have to stop the show. Luckily, Alex George sprinted to the Campus Center and demanded a new amp. The show was up and running in about seven minutes. The Lawrence crowd was understanding and had no issue getting back into the show once things started rolling.
Prof seemed right at home in the dank atmosphere of the Greenfire basement. Christmas lights strung and speakers blaring, the crowd was excited by the performer and dancing together.
Sweat in their eyes and hands in the air, Lawrence showed love to an up-and-coming Midwest rapper with no real connection to LU. The lights strung across the ceiling would occasionally cut in and out, and you could tell that all the bodies moving were having a wonderful time.
Prof proved a skilled performer with his onstage conduct. He brought lots of energy to the show and demanded attention. His songs have an aggressive style to them, similar to late Minnesota MC Eyedea, that make his voice crawl out over the beat and right into your ears. His DJ also worked the beats with skill and was a vibrant personality for the rapper to bounce off of. His scratching and run-backs added elements to the show that fleshed out the full hip-hop experience.
The show closed out with a dubstep set by Sound Remedy that left people looking for nothing but more partying. For Lawrence’s first hip-hop basement show in quite some time, this was a great achievement for HHC.
Concluded George, “I’ve heard from a lot of people that LU is unfriendly to hip-hop, but from my experiences and from the response to the show last night I have found that to be very untrue. […] The Greenfire show proved to me that hip-hop is alive and well at Lawrence.