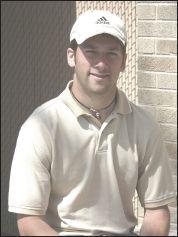 Assistant Professor of Music Michael Mizrahi came to Lawrence in 2009, fresh from several years within the New York City classical music scene. A graduate of the University of Virginia with a bachelor’s degree in religion and music and the Yale School of Music with a master’s degree in piano performance, Mizrahi nurtures a holistic musical life that includes both teaching and performing.Kim: You were originally a physics major during your undergraduate years. What got you into a music career?

Mizrahi: I started out as a physics major and ended up with a physics minor and a music and religion double major. But I was always playing music; I’ve played piano since the age of four, but it wasn’t something that I thought I was going to do as a career when I went to college. I went to the University of Virginia, which was a liberal arts school – they had a music major there, but it wasn’t in performance. So I was not performing very much. or I was not pursuing that professionally until after I graduated.

Kim: You maintain an active performing life. What genre of classical music do you enjoy playing the most?

Mizrahi: What I love about what I’m doing right now, and the piano in general, is that I can do so many different things, especially in terms of variety of repertoire. I do a lot of recently composed music; I also do a lot of music that was composed 300 years ago. I particularly enjoy chamber music. I really enjoy working with other musicians in a small group. To me it can be the most artistically fulfilling genre, because you get to really talk about ideas and explore phrasing together in an intimate way.

Kim: So who are your favorite composers?

Mizrahi: If I have to pick one, I have to say Mozart. It’s astonishing what he can do with just one accidental here or a slight variation in a phrase there. The emotional range he is able to capture with the simplest means! I love music especially from the classical era, and I also do a lot of contemporary music. I love working with music being written today.

Kim: They say that all artists need a muse. What activities do you do that feed your artistic side and impact your piano playing?

Mizrahi: Tough question! Well, I think that everything I do seems to feed my artistic side. Just living life, walking around campus. I really enjoy going on walks; I enjoy being in nature. But really, I’m thinking about music all the time, basically 100 percent of the time, like a soundtrack. I would say I do most of my practicing away from the piano, actually, because I’m thinking about music and I’m walking around to the beat of whatever’s in my head sometimes. I know this sounds cliché, but I’ll notice a bird chirping in a certain way and I’ll go, “Oh, that reminds me of a certain piece I’m playing.” It just creates a whole web of imagery that I then bring to what I’m actually practicing. Some people say you shouldn’t play certain repertoire until you’re 40 or 50 years old, and I think what’s behind that is that you have to have lived that many years. But I can’t just pick one thing or two things that I go to for artistic rejuvenation.

Kim: There’s that image in the music world of the studio professor who’s a father/mother figure to their students. What kind of relationships do you envision forging with your students?

Mizrahi: Well, I’m not here to be someone’s counselor, necessarily. Probably the latter, because I feel like because I incorporate all these things around me into what I do… I think everything comes in play, except maybe your personal life, when you come into your lesson. I would hope that it’s not only a good performance through which I model myself to my students, but just. generally.