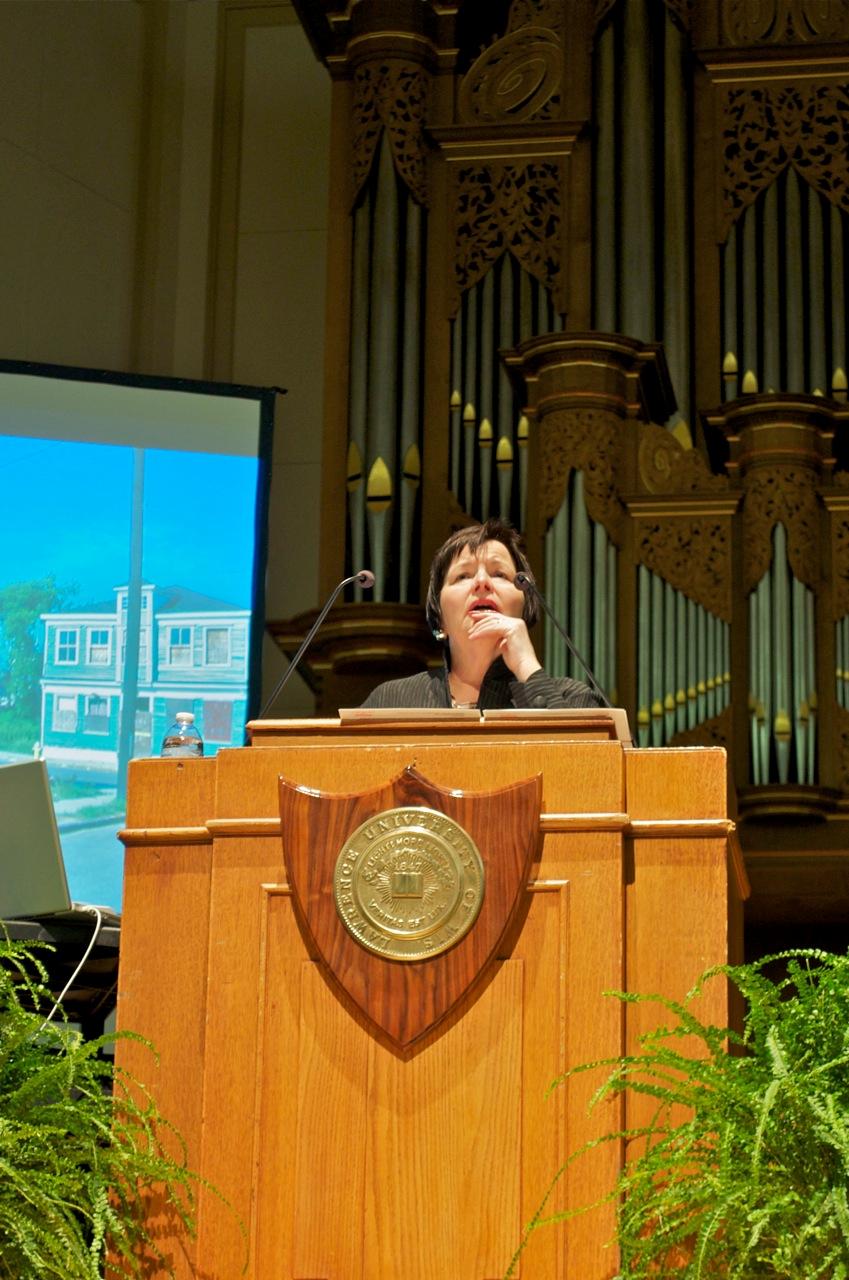 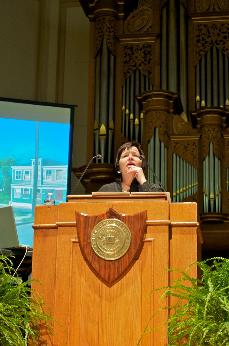 In keeping with this year’s theme for the 2010-2011 Convocation Series, Innovation through Collaboration, Mary Jane Jacob, the third speaker in the series spoke in the Memorial Chapel Tuesday, Feb. 7, delivering a talk titled “The Collective Creative Process.”
Jacob, a professor, independent curator and executive director of exhibitions at the School of the Art Institute of Chicago, shared her vision of developing the relationship between art and social issues through community collaboration.
Though Jacob’s career as a curator began as a solo practice within the discreet inventive setting of a museum, her path quickly led her outside into communities, where people were living their daily lives.
Explained Jacob, “I had a growing discomfort with museums as a space for experiencing art. As time went on, I came to see how the museum experience could come to take over the art experience.”
Before long, Jacob found an outlet for her desire to explore art outside of the museum by directing a two-year project in Chicago called “Culture in Action” from 1992 to 1993.
Among other things, this project included the installation of temporary monuments to women, created by a number of artists, in the loop area of downtown Chicago. Though these works were impermanent, lasting only one summer, Jacob commented that the important and lasting art occurred in the coming together of communities during that process.
“Art is both the process and the product, and collaborative projects are all about process,” Jacob explained.
Referring to the Lawrence Saxophone Quartet’s performance of a piece by Jun Nagao for the interlude before the address, Jacob said, “[It was] not the gentlemen who played so well, but what [their performance] did to you.”
Jacob described other projects she had initiated and directed, especially in Charleston, S.C. and Chicago. She explained that she commonly brings together many types of artists to create art. She works with researchers, historians, traffic engineers, librarians and many others within a community to create a sense of distinguished space in that community, to see the street as canvas.
As she approaches a community she is going to collaborate with, Jacob explained, she first poses these questions: What is at issue, what is the problem, what is the potential and what is the possibility?
Assistant Professor of Art History Elizabeth Carlson saw the applicability of Jacob’s message for the Lawrence campus in the possibility of asking these questions to the Lawrence campus, and then collaborating through art to further establish our community.
Jordan Severson ’11, the current student curator of the Campus Center Gallery, commented, “It is fortunate that we were able to hear her perspective as she continues to contribute to the dialogue that exists in today’s art world.”
“As for me,” Severson continued, “I will continue to consider her words. But she has definitely impacted the way I am thinking about the upcoming projects I have been planning in the Campus Center Gallery and in other venues.