Orr to become Provost and Dean of Faculty at Lake Forest 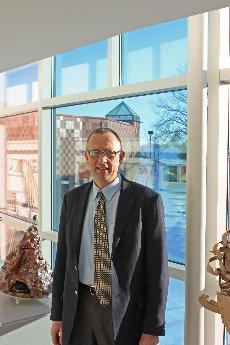 An email from President Jill Beck informed the student body Friday, Feb. 4 that Professor of Art History Michael Orr had been appointed as Provost and Dean of the Faculty at Lake Forest College.
For Orr, this appointment follows over 20 years of teaching, administrative involvement and scholarship at Lawrence University. Orr will remain at Lawrence for the rest of the academic year and will begin his new post this summer.
After completing a doctoral degree, Orr joined the Lawrence faculty in 1989. He recalled, “I knew very little about what a liberal arts college was about when I first started here. There is no equivalent to liberal arts colleges in England, which is where I did my undergraduate and graduate work at a major research institution.”
Orr continued, “My whole commitment to and understanding of the small, residential liberal arts college experience has been primarily shaped through my experience at Lawrence.”
Upon receiving tenure in 1995, as Orr recollected, “I gradually began to find I was being asked to do more things, and I enjoyed it.”
His responsibilities expanded to include chairing the Department of Art and Art History, as well as the Committee on University Governance and a special Trustee Task Force on Student Residential Life. Currently, in addition to teaching, Orr serves as Special Assistant to President Jill Beck.
At Lake Forest College, Orr hopes to be able to continue to teach. He explained, “As part of the appointment, I will become a tenured member of the art history department. Certainly the practice in the past has been that the provost periodically teaches.”
However, Orr is eagerly looking forward to working in an administrative capacity as well. Though he hasn’t laid out explicit plans for the first four years at Lake Forest, he stated, “That doesn’t mean I’m not aware that there are institutional issues that the college is facing. But my view of academic leadership is that it’s about finding a shared vision, and that shared vision is based on development of relationships, […] articulating common values […] and encouraging and supporting others.”
He continued, “With that as a kind of backdrop, I think it’d be ridiculous for me as someone who hasn’t yet lived in that community to announce, ‘Well, these are the things I want to accomplish.’ I have to embed myself in the institutional culture.”
Though he believes Lawrence has prepared him well for the transition, he additionally credits his year as an American Council on Education Fellow in 2009-2010 as transformative in his understanding of the liberal arts experience and financial planning.
As one of 39 selected Fellows, Orr decided to spend the year at Macalester College. While at Macalester, his responsibilities included assisting the President with long-term strategic and financial planning.
Throughout this year as Fellow, Orr was able to observe a variety of practices in financial management, as the program included visits to 36 additional institutions of higher education, ranging from liberal arts and community colleges to major research universities and for-profit universities.
Orr observed, “What that was very useful for was […] developing a much better understanding of how the particular unique attributes of small, residential liberal arts college, like Lawrence, […] fit within an increasingly competitive landscape in higher education more broadly.”
Orr emphasized that the comparative experience granted him “[an] understanding not only [of] what other liberal arts colleges are doing, but also [an] understanding [of] how what we do is either similar to, different from or being appropriated by institutions that are very different from us in size, shape, scope and mission.”
Bolstered by this experience, Orr returned to Appleton and began his involvement with strategic and financial planning at Lawrence. He described his current work, stating, “I’ve been engaging with the Financial Services Offices with how to craft those portions of the strategic plan that speak to financial goals and fiscal sustainability of the institution.”
When asked to reflect on his relationship with Lawrence, Orr concluded, “I’m incredibly grateful to the Lawrence institution for the support it’s given me. […] I think I have a much deeper and broader understanding both of the particular strengths and opportunities offered by the residential small liberal arts college, and a much more holistic understanding of where liberal arts colleges fit into the higher education whole more generally – because we’re a tiny, tiny fraction of the whole.”
As far as the transition to Lake Forest is concerned, Orr reflected, “I feel like it’s the natural next step at this point in my career. It’s going to be very hard to leave Lawrence, I’ve been here a long time and I’ve really enjoyed it. I have a deep loyalty to the institution and in that sense no time is a good time to leave. But I think professionally, in terms of my interests and what I want to accomplish, it’s a good time.