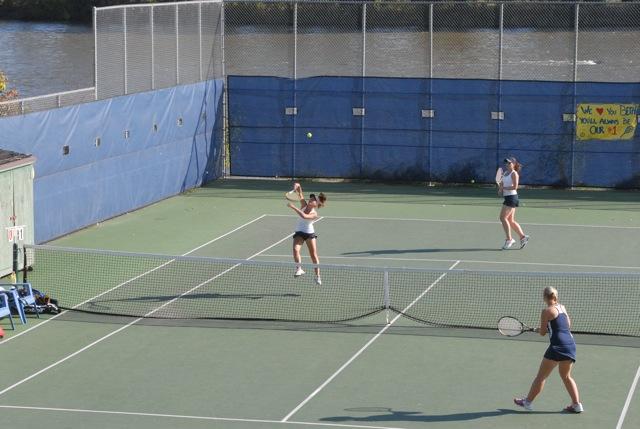 Last Wednesday, women’s tennis traveled to Ripon College to challenge the Red Devils on their home courts. The Vikings swept their competition, giving them at most four games in any given set. Gayatri Malhotra and Christina Schaupp had especially notable victories, defeating their opponents 6-0, 6-0 in the No. 3 and No. 4 singles competitions, respectively. In the doubles competition, the Larsen/Roesch No. 1 doubles team defeated Ripon’s Ullsperger and Ake 8-1, and the Schaupp/Geoffrey duo defeated Ripon’s No. 2 doubles team 8-3.

The Vikings gained a swift victory over Carroll University at the Lawrence courts Thursday. The singles competition was split 3-3. Senior captain Elizabeth Larson defeated Ripon’s Abigail Pellet (6-1, 6-2) in No. 1 singles play. Malhotra and Hannah Geoffrey also enjoyed singles victories. Malhotra won (6-2, 6-2) in the No. 3 singles competition, and Geoffrey won (6-2, 6-3) at No. 5 singles. The Viking doubles teams went 3-0, completely shutting out Carroll 8-4 at No. 1 doubles, 8-2 at No. 2 doubles and 8-2 at No. 3 doubles.

The Vikings traveled to Green Bay Sunday to lose a close match against St. Norbert College. The singles competition was again split 3-3. Larson, Schaupp and Dalton defeated their opponents in the No. 1, No. 4, and No. 6 singles matches, respectively.

Geoffrey played well, but lost at No. 5 singles in a very close match by two points in the tiebreaker set. The doubles competition was less successful. Larson and Roesch were the only team to earn a victory, defeating St. Norbert’s Kelly Van Handel and Nancy Chybowski 8-4.

Commenting on the loss against St. Norbert College, Larson noted, “We definitely could have won the match. There were some mental lapses and small errors that built up and cost us the match.”

Next weekend, the Lawrence women’s tennis team will compete in the Midwest Conference Championships. They are in good standing, currently ranked 2nd in the North Division of the conference, and will have a great shot at clinching the championship title and continuing on to the National Tournament.