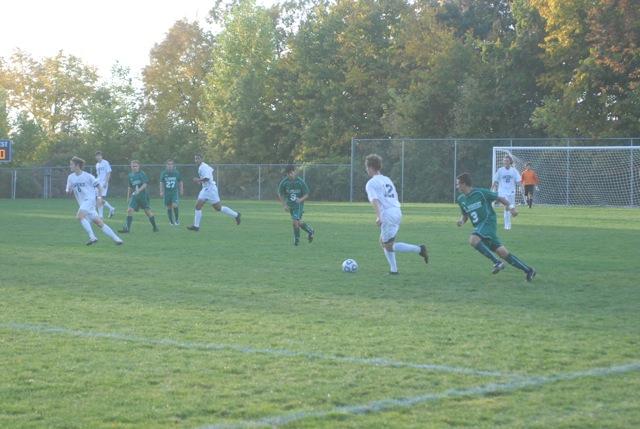 Last weekend, the men’s soccer team traveled to Illinois to play Monmouth College in the Vikings’ fourth conference match. The Vikings were hoping for their third conference win, but Monmouth came ready to play.

The Fighting Scots controlled the ball for most of the first half leaving the Vikes scrambling after them. Starting sophomore defender Daniel O’Mahoney got a yellow card for overly aggressive play during the first half. Despite Monmouth’s relentless attacking, the score remained 0-0 at the end of the first half.

Sophomore Joe Cullen said, “We came out sluggish in the first half, but we were lucky enough to avoid conceding a goal. We opted to change our mentality in the second half and were able to bring more to the field.”

Despite beginning the second half with a much more aggressive mentality, Lawrence’s intensity soon slipped, allowing Monmouth to pass around them. It was not long before Monmouth found the back of the net. Cullen added, “We elevated our level of play slightly but unfortunately it wasn’t enough. Like most goals scored on us this year, our opponents capitalized on several of our mental breakdowns. That’s what it really comes down too, which team will exploit the other’s slipups and this game the Scots capitalized.”

The Scots scored three more times in the next 30 minutes, sealing their victory. Freshman goal keeper Taiju Oki went in for the last 10 minutes of play and was able to keep the Scots from scoring any more goals. At the end of the game, the Scots had outshot the Vikes 16 to 11. Part of the Vikings’ woes can be attributed to injuries during the game.

O’Mahoney and fellow sophomore Charlie Mann both went down during the second half. Luckily, O’Mahoney did come back in with a few minutes left in the game. Foul language towards the referee gave him his second yellow card though, forcing a red and an ejection from the game. O’Mahoney now must sit out of their next conference match.