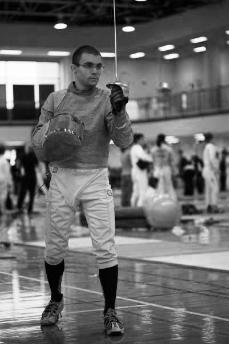 Rose Tepper: Indoor TrackHow do you get ready for a meet the day before at practice? Whatdo you do to prepare?
My pre-meet practice usually consists of our usual warm-up, a few short sprints and then only a small amount of jumping. The majority of my jumping practice is done earlier in the week so I have time to rest up my legs before competition. I mark out my full approach and make sure my steps are on and that I feel comfortable with my approach. It’s important to make sure that my speed is consistent and that my take off placement is correct. At most I will do a few three-step or five-step scissor jumps and one or two full jumps. For me, practices and meets are two completely separate things and so all of my mental preparing gets done on the day of the meet.

How did it feel to break the LU high jump record? What did you do to celebrate?
My only thought when clearing 1.67 meters was that I had provisionally qualified for Nationals. It wasn’t until after that Coach Fast told me I had also beat the school record. It was a very exhilarating feeling to know that I had just cleared a height that had not yet been cleared by anyone at Lawrence University during indoor track. I am thrilled to have contributed to Lawrence’s record history and I hope to continue doing so.

How are you preparing for the NCAA Championships? What are your goals for the meet?
Participating in the NCAA Championships shifts my workouts to a different schedule. Instead of practicing to peak at conference, I am now practicing to peak at Nationals. This means that I will train harder in the weeks leading up to conference than I have in the past so that I can taper off right before Nationals. I will practice jumping at higher heights and get used to coming in at a higher height since opening height will be higher at Nationals than it is at other competitions. I would love to leave as an All-American high jumper when I compete at Nationals but my goal is to perform at the best of my ability.

Do you prefer indoor or outdoor track?
Obviously my favorite part of track and field is the high jump; personally, I find it easier to jump outdoors and I have always performed better outdoors. Being able to practice jumping with my spikes is something that I can’t do indoors and I believe that it is definitely one of the advantages for the outdoor season. So because of this I would have to say that I do prefer the outdoor season over the indoor season.

Is there a professional/famous jumper that you look up to?
To be honest, I probably couldn’t even name one professional jumper. All I know is that I have always loved jumping and that it is what drives me to become better. It is impossible to stop working hard at something that you love. And for whom I look up to, I would have to say it is my number-one fan: my dad. Also, I am lucky to have an entire team behind me to back me up and cheer me on. The seniors on the team who graduated last year and the upperclassmen on the team now are the ones who helped me along the way and who have inspired me to become better.

What is the hardest part about fencing?
The hardest part about competing in Division I NCAA fencing is that bouts can be as short as 20 seconds, so it is incumbent upon fencers to size up their opponent, gauge their strengths and weaknesses and adapt all without getting hit. This means each touch is as taxing as a 100-meter sprint and a chess game. Furthermore, when fencing Olympic caliber fencers, those 20 seconds really fly. Such bouts can be moral busters when going over one’s win-loss record, but competing against someone who is amongst the top .5 percent in the world is always a stimulating learning experience.
If you could fence against anyone in the world, who would it be and why?
I’d like to go 15 touches with Nicolas Lopez – a gold and silver medalist at the Beijing Olympics from France. I’ve collected about 20 hours of his competition footage and attempt to emulate his style in my own sabre fencing. He composes a lot of risky but devastating traps, which exploit any opponent’s lack of attention to detail.
How did you get started fencing? What’s kept you in it?
I started fencing at Culver Military Academy as part of modern pentathlon training. After fencing épée for a few weeks I realized that I loved fencing in its own right and decided to pursue the sport further. What’s kept me in the sport it is a genuine appreciation for fencing, and since athletes can compete competitively whether they’re in their teens or sixties on the Olympic level I see no reason to stop. No matter where in the world one goes with this sport, there is always an opponent with a novel way of approaching what you had believed were sound strategies; the fact that one is always a student of the sport has kept me fascinated with fencing.

If you could play another sport in college, what would it be and why?
Polo. It’s fast and has a great team dynamic.

What are the different types of weapons that are used in fencing? How do they differ?
While the three blades in fencing appear similar, they are all radically different in their scoring ability and tactics. In sabre, one scores by making contact between their blade and their opponent anywhere above the waist, excluding wrist to fingers. Simultaneously, a concept called “right-of-way” is employed in sabre, which forces the attacker to attain the priority of attack before they can initiate a scoring hit. Because it is so easy to score in sabre, very precise planning on the part of the attacking fencer is essential because hesitating, missing or removing the threatening blade transfers the “right-of-way” to the opponent. Foil also employs “right-of-way,” but touches are scored by depressing the button-tip of the blade on an opponent’s valid target area, no credit for swipes or sliding, with over 500 grams-force. The valid target area for the Foil is anywhere on the torso of the opponent. Because the head and arms are not valid, as they are in sabre, foil fencers must accurately thrust to the opponent’s torso without becoming exposed in the process, or losing their “right-of-way”. In épée, one achieves points by depressing the tip of their blade onto their opponent with more than 750 grams-force. Points can only be scored by depressing the tip, as in foil, but the valid target area is the entire body from the head and pinky finger to the toes. Epée does not employ “right-of-way” so each fencer may score at [almost] any time, which results in calculated and conservative tactics on the part of both fencers.