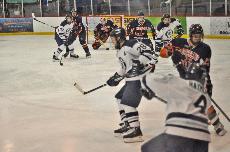 The Lawrence University hockey team swept Northland College last weekend in a pair of games dominated by the Vikings. Lawrence displayed their talent on both offense and defense, and a couple of Vikings earned weekly conference awards for their stellar play.
In the first game, Lawrence blew open a 1-0 game with four goals in the final period. Senior goaltender Evan Johnson stopped 21 shots to earn his ninth career shutout – adding to his own school record. While the shutout was Johnson’s ninth career clean sheet, it was the first for the Vikings since February 2009.
The 5-0 victory also clinched a spot in the MCHA playoffs for coach Mike Szkodzinski’s squad.
In the second game of the weekend series, another huge third period gave the Vikings (11-9-1, 9-7-0 MCHA) the sweep. With the score tied at two goals apiece heading into the third period, the Vikings got goals from Jon Sheridan and Jon Bellotti to give them the edge.
Sam Johnson and Matt Hughes also had goals for Lawrence, both in the first period. Northland had a goal in both the first and second period, but could not cut into the Vikings’ lead in the third period. Evan Johnson made 35 saves to earn the 4-2 victory.
As a result of their exceptional performances this past weekend, Sheridan and William Thoren earned MCHA weekly awards. Sheridan was named the MCHA Defensive Player of the Week, while Thoren was named Freshman of the Week. Sheridan had two assists in the Vikings 5-0 win of the series opener, and scored the game-winning goal to seal the sweep.
Sheridan, the Vikings’ senior captain who now has three goals and six assists on the year, said about the honor, “It’s great to be recognized for my individual efforts, but as a team we played really well this weekend. Most importantly, we secured a spot in the tournament.”
Thoren, a freshman defender, picked up three assists over the weekend to add to his team-leading 13 assists on the season.
The Vikings will be back in action next weekend when they will take on Marian University in a home-and-home series.