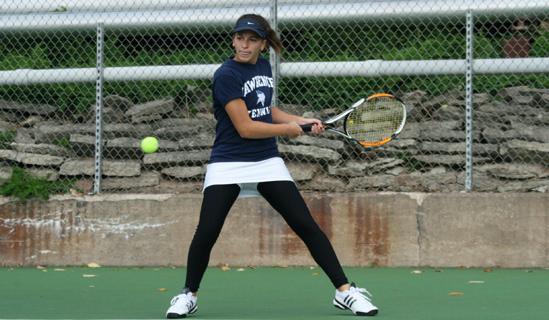 1) What have been the keys to the team’s successes this season?

The freshmen! This year we have so many new talented freshmen. The team has such depth now with them, in addition to the returning players. When we are playing our top game with confidence, each spot of the line-up is unstoppable!

2) What are the team’s goals for the upcoming conference meet? How do you guys plan to accomplish them?

Our ultimate goal is to win team conference. Although we play Grinnell first, if we play our best, we can definitely beat them. During individual conference, everyone has a chance to go really far into the tournament. It’s all really about confidence and taking advantage of opportunities. We really need to just focus and keep up the intensity during practice before then.

3) The team has quite a few new players this year. How have the new additions added to the team dynamic on and off the courts?

I absolutely love our new freshmen and new transfer student. They are all such sweethearts, and add so much to the team through their individual talents and personalities. I honestly could not ask for a better team; everyone is so supportive of each other. On the courts, we are close teammates and off the courts, we are all close friends.

4) Is it a challenge having such a young team? Why or why not?

I don’t really think so. Although there’s only one senior and one junior on the team, I feel like the younger players are so talented that experience does not matter as much. Each match we play, we learn something and the confidence that each player brings to the court goes a long way.

5) If you were stranded on an island with one pro tennis player (male or female) who would it be and why?

Easiest question: Justine Henin. Unfortunately, she retired last year — saddest day in tennis history. I absolutely love her. Although she is petite, her all-court game and fierceness on the court always inspires me. She is someone that truly loves the game and always puts up such a fight. There is so much I can relate to, so I know that we would become instant friends!

1) You recently passed the 1,000 career digs mark. How did that feel? Did you celebrate?

I actually didn’t know that I was close to 1,000 digs. I knew that it would potentially happen this season, but not so early. So, when they announced in between sets one and two that I had hit the mark, I was not only shocked but also super embarrassed because all I wanted to do was continue to dominate Carroll and yet my teammates were cheering ridiculously loud. After the game, however, I was really excited that it happened at home, and that a bunch of my family was there for the game. Also, my teammates and coaches were so supportive, and I really appreciated how excited they all were for me.

2) The team has had a very successful start to the season. What things have contributed to these successes and how does the team plan to continue them?

I think that two things have contributed to our success. First of all, the returning players put in more work in the off season than any other team I have been a part of since I have been here. Second, this is the closest team I have been on and I think our team chemistry on and off the court has really helped us. To continue our success we really just need to stay focused. We tend to lose our focus here and there, and against some great teams we cannot afford to do that. Overall, we just need to continue to play LU volleyball and the wins will keep rolling in.

3) What is your favorite memory from this season so far?

So far my favorite memory of the season has to be the first set of our Carroll game. It not only was our first conference game, but it also was at home. We came out stronger than we ever had before and literally killed them. The energy in the gym and specifically on the court was amazing!!! Also, we ended the game 1-0 in conference, which is a pretty good way to start the conference season!

4) Do you have a pre-game routine? What is it? What gets you pumped up for a game?

Basically, before every game we watch a highlight film, take some quiet time and come together for a pre-game chat to motivate us to go out on the court and get some! But what really gets me pumped for the game is some JBiebs blaring in the gym!

5) What is the hardest part about your position? The easiest?

The hardest part about my position, being a DS, is needing to be constantly loud. I need to be calling out the ball all the time, which believe it or not takes a lot of effort. Literally there are times in the game when I get way more winded from yelling, then I do from moving and playing the ball. The easiest part of my position is when the front row puts up a solid block and the hitter has no choice but to hit the ball right to me and all I have to do is shoot and drive. Getting an easy dig is so satisfying, but the credit must go to the blockers in front of me! 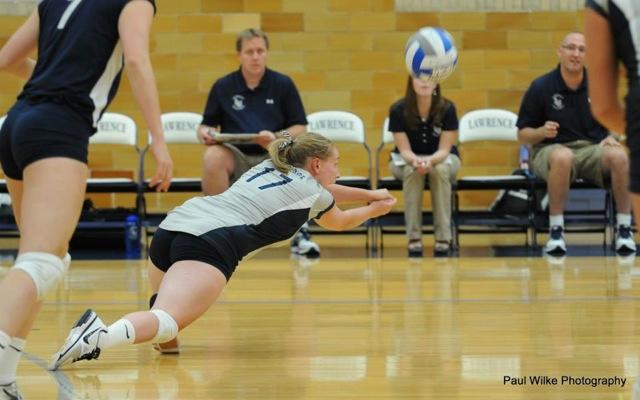