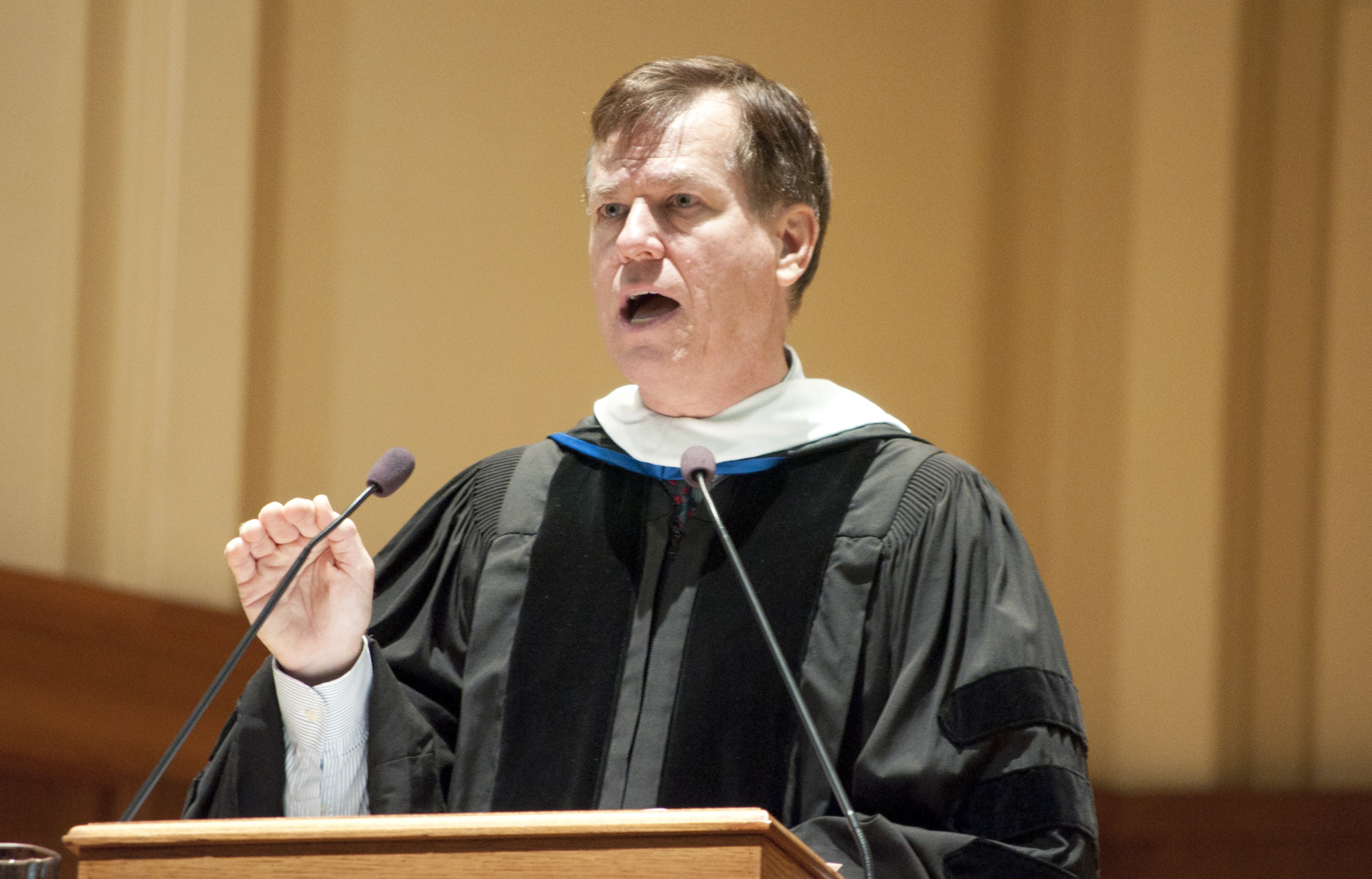 Harry M. Jansen Kraemer Jr. ‘77, whose talk was entitled “Becoming a Values-Based Leader,” delivered this year’s convocation. Kraemer currently serves as a clinical professor of management and strategy at the Kellogg School of Management at Northwestern University and as an executive partner for Madison Dearborn. He is also the former Chairman and CEO of Baxter International.

The convocation began with the traditional performance of two pieces by the Welcome Week Choir, conducted by co-directors of Choral Studies Phillip Swan and Stephen Sieck. The choir invites any freshmen to come together in a few rehearsals during Welcome Week in order to perform at this event.

Associate Professor of Music Matthew Michelic, chair of the Committee on Public Occasions, then introduced the 2011-2012 Convocation Series. This year’s theme is “Liberal Arts and the Life of the Mind.” Michelic noted that the goal of the series is to “look inward and consider the value of a liberal arts education.”

Future convocation speakers will include music critic for The New Yorker Alex Ross, primatologist and Professor of Primate Behavior at Emory University Frans de Waal and essayist, literary and cultural critic, and former Associate Professor of English at Yale William Deresiewicz. The honors convocation will be delivered by Lawrence Professor of History and Robert S. French Professor of American Studies Jerald Podair, who will speak on “The Only Life: Liberal Arts and the Life of the Mind at Lawrence.”

Kraemer structured his talk around leadership, focusing on the ways in which students at an institution like Lawrence might use their liberal arts education to learn how to be leaders both now and in the future. He stressed the importance of gaining “the ability to educate yourself for the rest of your life” in order to “become a better holistic human being.”

He emphasized various elements that play into leadership, isolating the ability to keep things simple, employing common sense and starting as soon as possible as key factors towards becoming good leaders. Additionally, he advised students to “remember it’s a journey.”

Much of Kraemer’s talk focused on his “Four Principles,” which he expands upon in his book, “From Values to Action: The Four Principles of Values-Based Leadership.” These principles include self-reflection, balance, true self-confidence and genuine humility.

Kraemer concluded by providing a “three-part equation” to explain the importance of self-reflection to leadership and thereby cater to the more quantitative-minded people in the audience: “Step one: If I’m not self-reflective, is it possible for me to know myself? I doubt it. Part two: If I don’t know myself, is it possible for me to lead myself? I don’t think so. Part three: If I can’t lead myself, how could I possibly lead other people?”

This year, the convocation concluded with the Matriculation Handshake, a tradition in which freshmen shake President Jill Beck’s hand as they leave the chapel. While this event is normally held during Welcome Week, Beck was not on campus during that week.

Students who attended the convocation were given a free copy of Kraemer’s book, which addresses many of the same concepts he touched on in his talk. 500 copies were available for students.