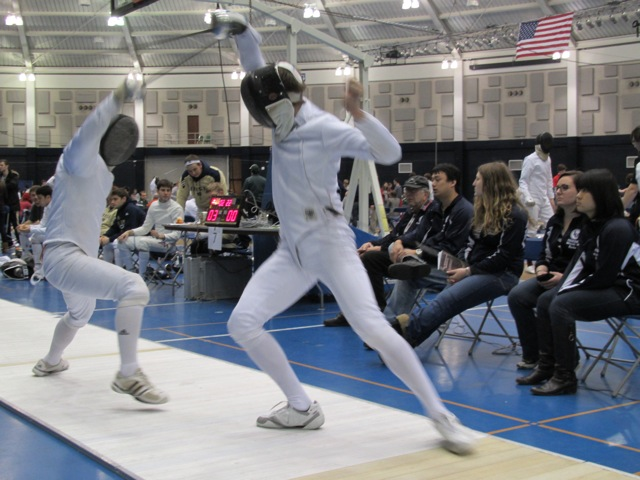 Last weekend, Jan. 28-29, the Lawrence University fencing team traveled to Notre Dame for their first competition of the season. Senior Madeline Cooper stated, “The first tournament of the year is always a little intimidating. We get up at 6:15, and we have to start warming up as soon as we get to the venue. I try to keep really calm in the morning so I’m not going into the first round too nervous.”

The team had a rocky start, losing freshman starter and previous Korean national team member Yongwoo Choi to an ankle injury in the second round. However, this did not stop Lawrence from beating some of the toughest teams in the tournament, including Northwestern, Michigan State, Cleveland State, Purdue and Detroit Mercy. In the end the team placed 4th out of 15, a solid first showing. Men’s épée and women’s foil both went 6-3, losing to only Notre Dame, UW-Madison and Wayne State.

According to Assistant Fencing Coach Alexander Kaeding, Lawrence had its best tournament to date, with almost every squad — except men’s saber — finishing over .500 and in the top six of 18 schools! On top of that, based on their performance this weekend, many of the fencing team members qualified for NCAA Regionals, which is held at the end of next month.

When asked how she felt the team did this weekend and what they will look to improve on for upcoming matches Cooper stated, “I am so proud of the women’s team this weekend, and so far the men are doing well also. We have a lot of new fencers this year, and we fenced some really good schools but everyone had a lot of energy and fenced well.”

Cooper continued, “All of the experienced fencers really improved from last year, so I’m super excited for our upcoming tournaments! Because we have so many beginners I want to focus on nice, clean technique in practice. I think that will help everyone on the team.”

The team’s next tournament is this Feb. 4-5 at Northwestern.