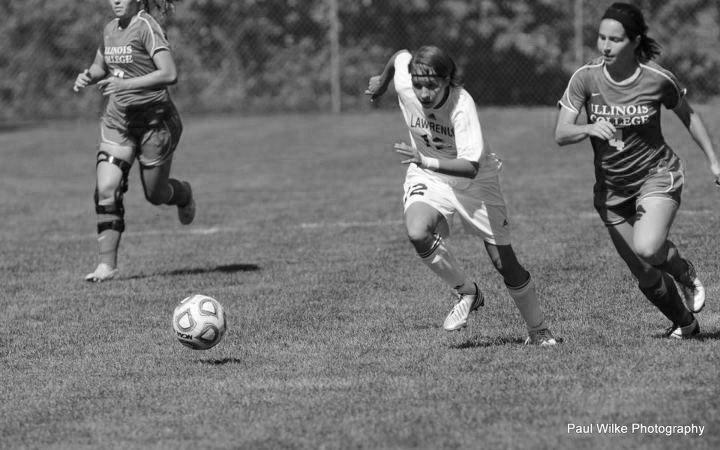 Lawrence started off the weekend with a very convincing win over Illinois College. The changed formation this year turned out to be a tremendous benefit to the team offensively, over the weekend. Lawrence jumped to a 2-0 lead with goals by Kirstin Edwards and Muchowski on assists from Anne Leung, Caroline Borst, Liza Girsova and Burke within the first 15 minutes.

Illinois countered with a few good offensive opportunities but were easily shut down by goaltender Burke who faced 10 shots in the game. Towards the end of the game Lawrence maintained possession on Illinois’ half nearly the whole time with several good scoring opportunities. Muchowski put the nail in the coffin in the 74th minute, with her second goal after a great individual effort. With a 3-0 win Lawrence picked up their first conference win of the season and their second overall.

Sunday’s game was a repeat of Saturday’s, with the Vikings appearing very dominant. Knox College, the weaker of the two opponents, didn’t stand a chance with three Vikings racking up a goal and an assist each. The scoring started with Muchowski in the 19th minute, followed by Jenny Angeli of a pass from Amanda Ollerer right before halftime. After the break, Lawrence continued the offensive overload with Leung picking up her first career goal on a rebound from Girzova’s shot that hit the post.

Finally, Liza Girsova picked up her first career goal on a cross from Leung, making it 4-0 in the 63rd minute. Knox only tested Burke with one shot before she was taken out in the 70th minute and replaced by sophomore Dani Glass. Knox did salvage some respectability by preventing a second Viking shutout in as many days by scoring a single goal at game’s end, leaving the final score 4-1.

After the game, sophomore midfielder Jenny Angeli told us, “Our new formation 3-5-2, helped us spread out our opponents offensively. In turn, that allowed for us to capitalize on our chances more effectively.”

Lawrence University currently sits on a 2-0 record in their conference and 3-4 record overall. Lake Forest College will be their next challenge with a 2-0 record as well (4-4 overall).