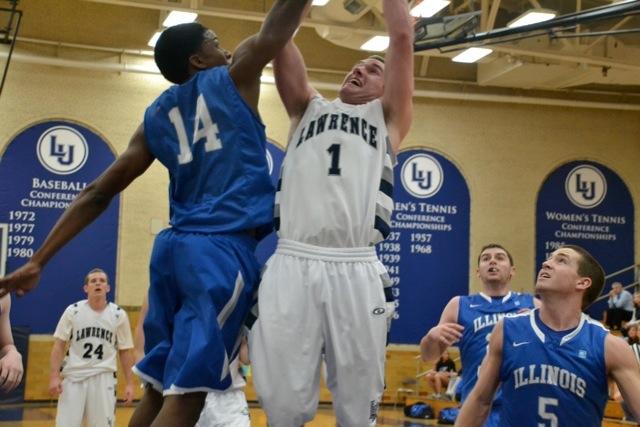 The Lawrence University men’s basketball team battled through two tough competitions this weekend, losing to Lake Forest in overtime on Feb. 3 and defeating Illinois College by only one point on Feb. 4.

The Vikings held the lead over Lake Forest for the entire first half, but the two teams had to battle it out for control of the second. Senior Tyler Crisman had 16 points in the first half, carrying the Vikings into the break with a 30-25 lead. The Foresters entered the second half ready to put up a fight as they challenged the Viking lead. The teams were neck to neck battling for the lead, tying the game up four times in the half with the largest lead by either team reaching only four points.

With the score tied 54-54 and just two seconds left, Lake Forest almost secured the win but three just-missed tip-ins and a final rebound by junior Conor Klusendorf took the game into overtime. Lawrence’s defense continued to falter, and the Foresters took over for the win during overtime. The Vikings put up only four more points, free throws by Crisman and sophomore Chris Siebert, while Lake Forest pulled forward for an eight point lead, ending the game 66-58.

Crisman paced the Vikings with 18 points against the Foresters, followed by Siebert with 15 and freshman Ryan DePouw with 10. Klusendorf lead the team in rebounds with seven, and sophomore Davis DeWolfe had six.

Neither Lawrence nor Illinois College could maintain control over Saturday’s game, as the lead changed hands back and forth 13 times. The teams tied the score up 10 times and again the largest lead by either team was just four points.

The game was tied at 68-68 with only 3:56 left, but the Vikings managed to pull ahead for a small lead. Sophomore Andrew Kline finally got a chance to prove his spot on the court, as he pulled the Vikings into their final lead of the game with a jumper and a layup. Successful shots from the line by Klusendorf, Crisman, and sophomore Brian Gryszkiewicz kept the Vikings going, and the score was 77-73 with five seconds left.

The Viking defense slipped as they watched a Blueboy sink a three-pointer with just a second left, and the Viking fans sat anxiously on the edge their bleacher seats, dreading the possibility of a repeat of the night before against Lake Forest. Fortunately, the Vikings came out victorious: 77-76.

Siebert paced the Vikings with 24 points, followed by Crisman with 14 and Klusendorf lead with 8 rebounds.

Lawrence returns to action Saturday, Feb. 11 at 4:00 p.m. against Beloit at Alexander Gym, after the Lawrence Alumni Game at 11:00 a.m.