Student Sports Workers of the Week 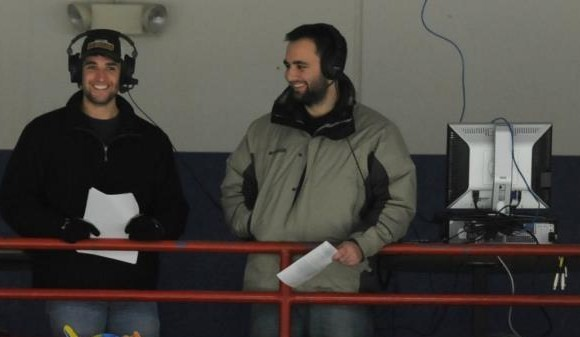 1) What is the best part about your job? The worst?

Revis: Best part of the job is getting paid while attending and supporting LU teams. You feel like you are a part of the game. The worst part of the job is when Brady shows off that he knows way more about hockey than I do when we are on air and makes me look bad. He doesn’t apologize for it. He thinks he’s cute.

Kain: The best part of my job is providing the parents of the players on the team a way to follow the games since many players are from out of state and even other countries, which makes it difficult for many parents to come to many of the games. Our webcasts give them an opportunity to follow their sons and the team. The worst part is trying to correct my counterpart John, who has a limited background in hockey, on any mistakes he makes in his terminology and descriptions of hockey.

2) How much, if any, preparation do you do for announcing games?

Revis: A little preparation is needed. When broadcasting, we spend about a half hour before the game going over how each team is doing, the pronunciations of visiting players and finding notable stats to include during the broadcast.

Kain: We usually try to spend 20-30 minutes prior to the game going over any statistics and qualities of the two teams that might play a role in the game. We also go over the rosters and starting lineups so we know who to look for and are familiar with the names.

3) Any embarrassing moments while announcing?

Revis: When doing the PA announcing for basketball games, I am also in charge of playing the music during breaks. When the stereo is for some reason not working or I’m repeating a previous song, it seems like everyone in the crowd is staring at me basically letting me know I’m screwing up.

Kain: There have not been any embarrassing moments that I can think of. However, sometimes fans will try to shout things into our headsets, which we have to try to avoid.

4) What has been your favorite game to announce? Why?

Revis: The recent home hockey game against Marian. It involved all the qualities of a great game: a comeback, drama and late-game heroics. It was a great game to be at.

Kain: My favorite game to announce was the come from behind overtime victory against Marian this past week. It was an exciting game with a dramatic finish, and it was great to be able to narrate such an exciting goal as time expired.