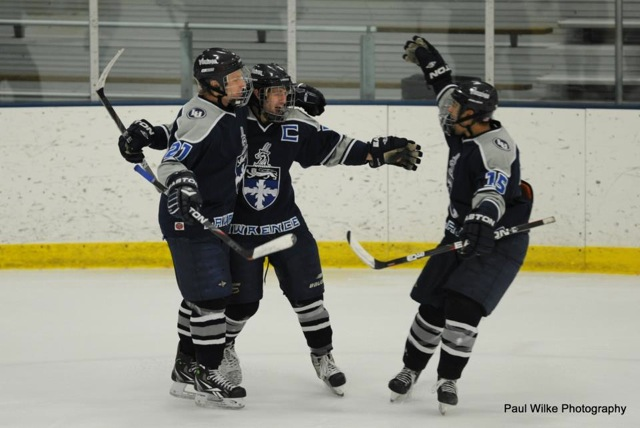 The men’s hockey team gathered two victories in a weekend sweep of the Marian University Sabres and took home the third annual Battle of Highway 41 trophy last weekend, Feb. 3-4. The Vikings won an overtime thriller at the Appleton Family Ice Center 3-2 and then handled Marian the next day with a 6-2 win.

Lawrence’s overall record now stands 9-9-3 with an 8-5-3 record in Midwest Collegiate Hockey Association play. The victories also move Lawrence into a first place tie with the Sabres in the MCHA Northern Division.

In the first game, the Vikings fell behind early after the Sabres scored twice in the first period. Lawrence then got the scoring started in the second period when freshman forward Gustav Lindgren scored off an assist from Jameson Raymond five minutes into the period. The score would stay that way until 11 seconds into the third period when senior forward Matt Hughes scored off of passes from junior forward Brad Scurfield and junior forward Phil Bushbacher.

Marian took the lead back seven minutes later. With time and opportunities dwindling, Lindgren scored the equalizer with just over three minutes left in regulation off of passes from sophomore forward Derek Brickan and Raymond. The contest headed to overtime.

Lawrence seemed to be barely hanging on as Marian recorded five shots in the five minute overtime period. However, the Vikings got only one shot and made it count. With about 10 seconds left, Hughes stole the puck from an unsuspecting Marian and scored a dramatic game-winning goal. Scurfield was credited with the assist. This snapped Lawrence’s 14 game winless streak against the Sabres.

After a thrilling victory, both teams traveled to Fond du Lac for part two. Just 10 seconds into the game, Scurfield scored, and sophomore forward Huck Saunders added another goal two minutes later for a quick Lawrence 2-0 lead. Saunders would score again 10 minutes later, putting the Vikings off to a great start.

In the second period, Marian began to stage a comeback with two goals. However, a Marian player was penalized with holding and Lawrence took advantage of the power play as Bushbacher scored giving the Vikings a 4-2 cushion going into the second period. The third period was all Lawrence as Hughes and Scurfield added goals to finish off the 6-2 victory. The Vikings dominated with a 45-27 shot advantage.

“Great weekend for the boys,” commented Saunders. “We battled hard and it paid off. We stuck to our system and Marian couldn’t handle it.” If the Vikings take care of business the next few games, they are looking to have home ice advantage for the playoffs since they would hold the tiebreaker advantage with Marian. Lawrence has four more conference games left. When asked how the team will keep the momentum going, Saunders added “Continue to battle. Continue to win.”

The Vikings return to the ice this weekend, Feb. 10-11, to host two games against the Finlandia University Lions.