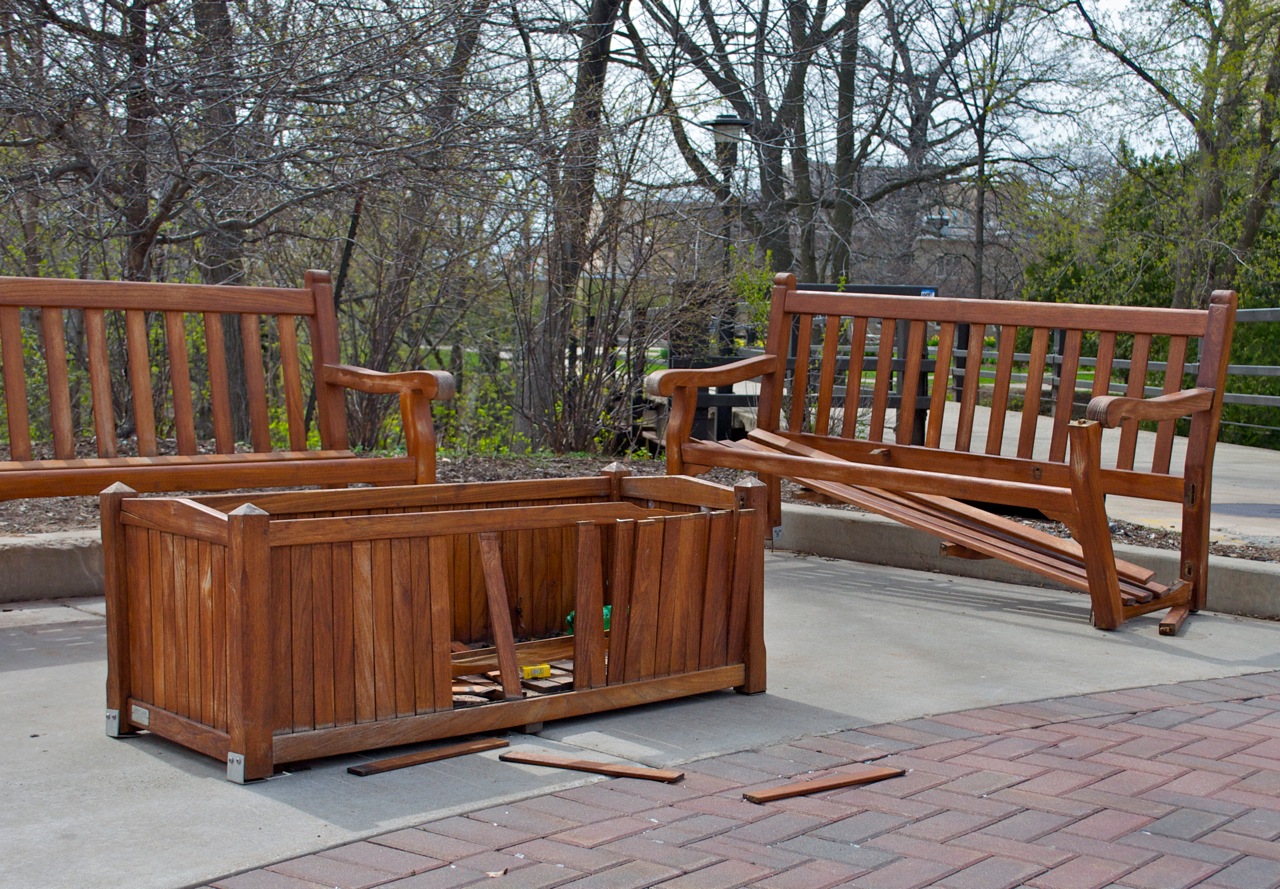 Over the past few weeks, the Lawrence campus has been subject to a number of noticeable defacements.

The work of unknown vandals included upturned statues on Hurvis Crossing, damaged benches outside of Ormsby Hall and knocked-over light poles across campus.

Campus Center Director Gregory Griffin noted, “The light poles are found knocked over every Saturday and Sunday” but added that the harm caused to the statues and the benches was a first for the university.

Lawrence students typically assume that, because of the Honor Code, acts such as this should not take place. Students feel secure, for instance, in leaving personal items outside of Andrew Commons and expect high levels of trust and respect to exist in the Lawrence community.

Ormsby Hall resident and freshman Tara Jensen said, “I found it really saddening that people would be so destructive of a place that I value so much, especially when it is founded on collaboration and respect. One of the reasons I chose Lawrence was because of the Honor Code, and to see it so blatantly ignored is really disturbing.”

Senior Magdalena Waz, also disappointed to see the flagrant damage of property across campus, posted photos of the vandalized benches and light posts on Facebook. Waz tagged her Facebook friends in the photos, including a message encouraging students to tag their friends and re-post the photos on their own profiles.

Waz wrote, “It would be great if we could let vandals know that we’re not happy about thousands of dollars worth of preventable damage happening on our campus.”

When asked why she chose to use Facebook to spread the photos, Waz responded, “I needed to reach a larger audience. There’s really no way to do that anymore because people don’t congregate in many places, except for Andrew Commons, but tabling there is not as effective and it takes longer to set up.”

She continued, “With vandalism, quick action seems to be the key. Catching the vandal red-handed would be great, but the next best thing is a swift response, an acknowledgment that we don’t tolerate this behavior on campus anymore.”

Waz’s photos stimulated a response from many areas of campus. Students, faculty and staff all commented on the album, noting a collective dismay regarding such acts of vandalism. A message from LUCC President J.R. Vanko was sent to students Wednesday, May 11 in response to the posted photos.

“I had actually been expecting a negative response,” said Waz. “I thought people would consider what I did to be spam, and an empty response to actions that had already taken place. But I was really encouraged to find that many students were just as concerned as I was but seemed to be at a loss for what to do next.”

These acts of vandalism rode on the wake of Kate’s Corner Store’s ban on backpacks, requiring students to remove backpacks and purses before entering the store. The ban has since been lifted.

“It was in use for some time last year”, said Bon Appétit’s General Manager Julie Severance, “and we brought it back last term because we were experiencing numerous incidents of attempted theft.”

However, Griffin noted that the incidents of theft in the corner store were small compared to the number of dishes disappearing from the cafeteria.

“The loss of dishes is exceedingly high,” said Griffin, “and in the end, the students themselves are paying for it.”

Griffin also admitted that rarely are students apprehended for the above offenses. “The only thing that will decrease these acts is peer influence and student holding other students accountable,” he said.

Students are also invited to offer feedback to Bon Appétit about other ways to curb theft.

Severance explained, “It really helps to hear from people who use the space daily because [they] want Kate’s to be a very user-friendly environment for students.”