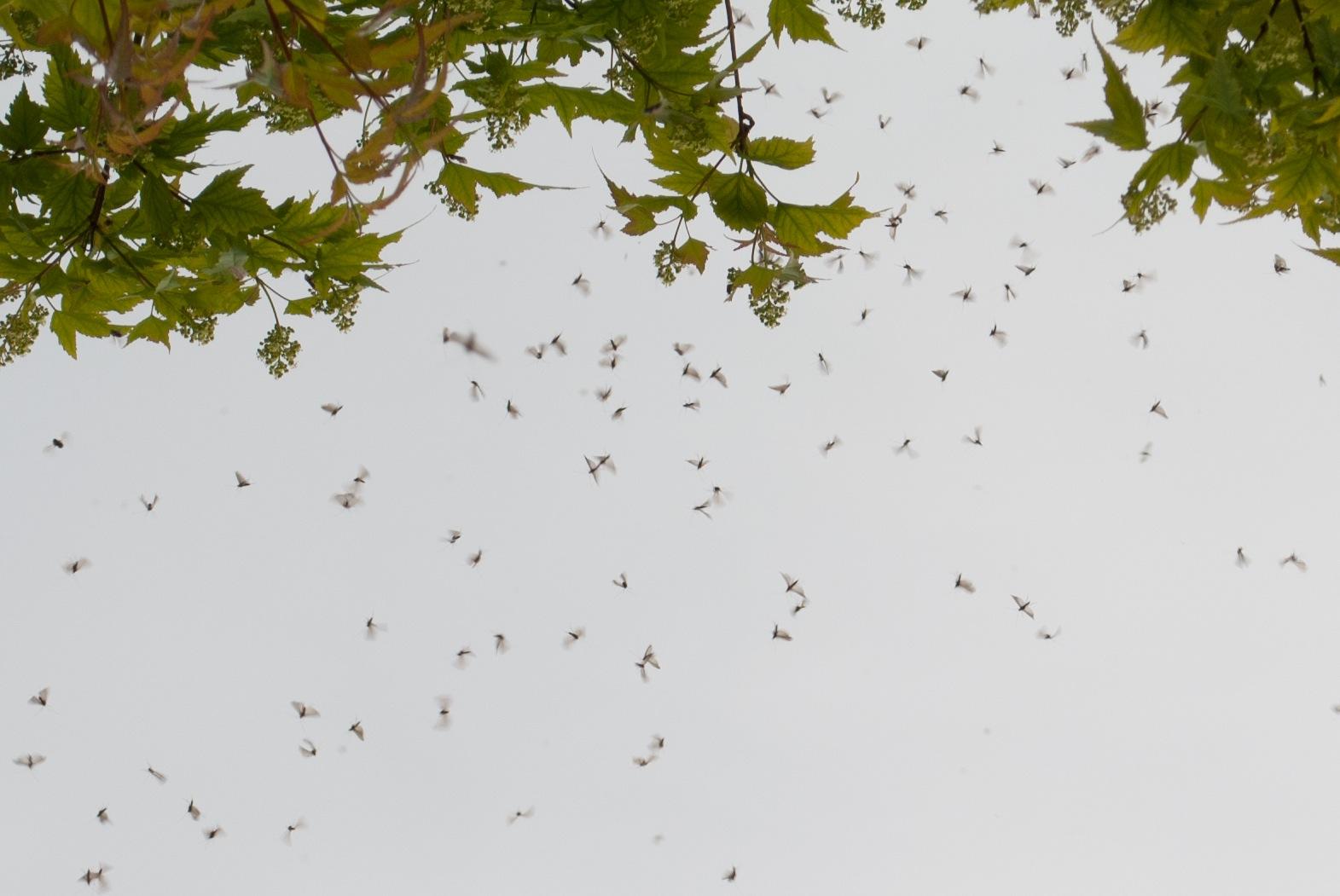 Last Wednesday, after everyone was ready to get out of class and enjoy the very warm weather and the beginning of reading period, many Lawrentians literally walked into a problem that plagued the campus. Swarms of small moth-like insects flew in large clouds, bothering students and faculty as they innocently walked around their campus.

These flies were seen everywhere — cluttering around the Wriston Art Center and Memorial Hall, gathering on the large doors and windows of the Warch Campus Center and flying onto laptops and into cups.

These little critters also have a tendency of flying into people’s eyes and nostrils and many students have experienced swallowing and choking on at least one of these insects.

“I walked into a swarm one time and one of them went up my nose and the other one I asked,” said senior Nidal Kram. “I felt the legs moving down my esophagus and trying to crawl out. It was disgusting.”

Although most students on this campus have come in contact with these swarms of flies, many people do not know much about them, even their names.

“I would like to keep the enemy nameless,” said freshman Allie Williams. “I have heard that they constructively fly into people’s faces, eyes and nostrils, but that’s about all I know.”

Most people refer to them as river flies and love flies but they are actually called caddisflies. Caddisflies are native flies that hatch during the first two weeks of May, usually around Mother’s Day.

Depending on the quality of the water, they live around rivers and streams, which is why they are more populous near buildings that are closer to the Fox River, like Warch, Memorial, Briggs and Trever Hall.

“Last year, when I lived in Trever, the flies were everywhere,” said sophomore Kamesha Beeks. “They were all on my window and in my car, and they only come out when it gets really hot. It’s just nasty.”

Although it seems like the caddisflies only exist in May, they are actually around all year round. They spend the majority of their existence in juvenile stages in the water as aquatic larvae, and when they grow and become larger, they become adults, emerge from the water and reproduce.

“The flies that you see flying around are adults, and they are really looking to mate,” said Professor of Biology and Dennis and Charlot Nelson Singleton Professor of Biological Sciences Bart DeStasio. “And they are only usually mating for two weeks. So although there might be a lot of them around now, in about two weeks from now, you won’t see a lot of them flying around.”

After they finish reproducing, they lay more eggs, and these flies usually become adults by the end of the summer and lay more eggs in the beginning of the fall. The eggs that are laid in the fall tend to take a while to grow because of the colder weather, and as a result, they tend to emerge during this time.

“They’re actually a good thing,” said DeStasio. “It’s a sign that things are very good in the Fox River.”

In the ’50s, ’60s and early ’70s, these flies were not around because the Fox River was one of the most degraded rivers in the United States. The flies are extremely sensitive to polluted and low oxygenated rivers, so after the sewage started to be treated, the flies eventually became populous around the area.

“There is no need to get rid of the caddisflies because they do not cause any harm to any humans except being a nuisance,” continued DeStasio.

The main reason why many students have strong feelings about the caddisflies is because they have not experienced seeing groups of insects as large as these before.

“They look like baby moths. But even though there are moths in Minnesota, you would only see like two or three in a single day,” said Beeks. “But here there are a lot of them flying around.”

“I don’t think I’ve ever experienced anything like this,” said Williams. “I think this is a clear example of the Lawrence difference.”