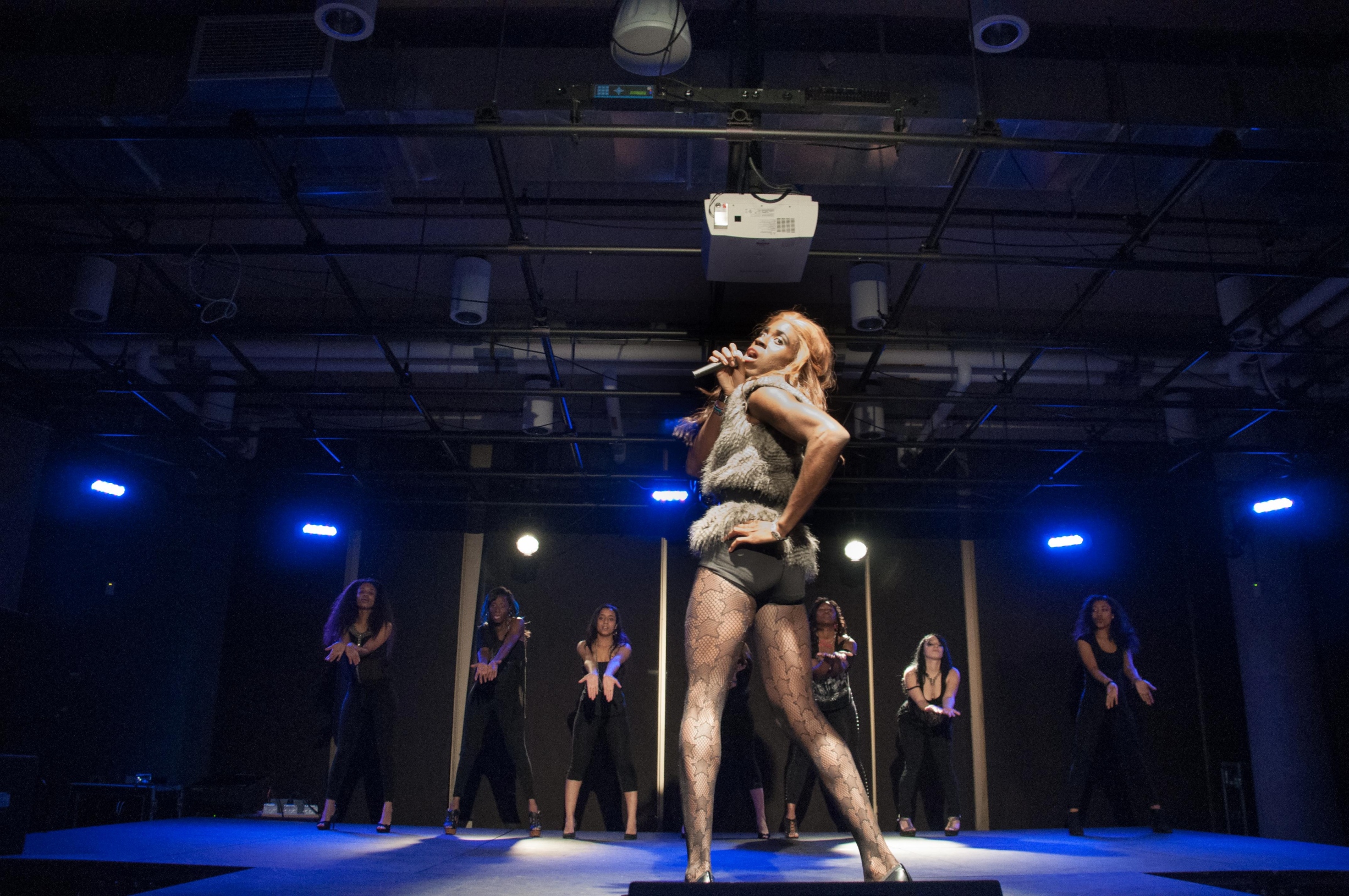 Hundreds of students gathered in the Esch-Hurvis room Friday, Feb. 22 as the Drag Show opened with drama. Sophomore Ryan Kottman, under the persona Fredrick Von Tiddlywink, held sophomore Tyler Grasee, as Anita Mann, in a dramatic dip as the show began. Both, along with junior Ariel Garcia, were the emcees of the show.

While the history of the Drag Show at Lawrence is unclear, there is evidence that it may have started as early as 2003. Since then, it has become a staple Lawrence tradition.

For the past three years, the show had been headed by alum Alex Ajayi ’12. This year, eight members from Gay Lesbian or Whatever (GLOW) and American Civil Liberties Union formed a committee that took charge of auditioning acts and organizing the show. Along with the new formation, the group put forth new goals.

Garcia, a member of the committee, was inspired by trips to Madison to see drag shows. Said Garcia, “Me and Tyler had gone to a few shows in Madison and we wanted to change how the Drag Show will be in the future. That was one of our main goals, to make it more audience participatory. In the past few years, a lot of it has been ‘Oh people, come sit down and just watch.’ In an actual drag show, people are cheering; they’re all dancing. There’s more participation.”

In line with their vision of a bigger audience component, the show hosted the first dance-off in recent Drag Show history. Roughly ten people presented their best dance moves to the tune of Britney Spears’ “Toxic.” The volume of the audience cheers acted as the judge. At the end of the dance-off, sophomore Romelle Loiseau was announced the winner.

Garcia also noted that there are not many places for drag in Appleton. He reflected, “There’s not really an opportunity for drag in Appleton except for Raven’s [bar and nightclub], and then you have to be 21 to go. This is opening drag to under-21 people.”

The show featured a variety of independent performances. They were a testament to the variation on campus, from the sultry Eartha Kitt number performed by senior Marshall Cuffe, to the power-pop rendition of “Crazy in Love,” performed by Andre Augustine and a group of backup dancers. The show also included drag kings, a group that lip-synced ‘N Sync’s memorable tune, “Bye Bye Bye.”

Though the atmosphere in the room was certainly boisterous and engaging, Garcia was quick to assert that a Drag Show is not just about clothes and makeup.

Garcia said, “To me, drag’s not even about just dressing up in a dress and a wig. It’s more of an artistic expression. It’s all, like, coming up with an act, coming up with a look, coming up with a persona. It’s all an art form. I think sometimes people think of drag as just, ‘Oh, they’re just putting on a costume,’ but it’s a lot more than that. It’s a big, artistic performance.”

Attendee junior Alex Wang asserted his own hope that people went to the show for the right reasons. Wang said, “I think that people are curious about different permeations of gender and sexuality, and the drag show is kind of a way to experience that.”

The committee has plans in the works to host another Drag Show during spring term. Garcia urged all who wish to participate to contact him or Kottman for more details.