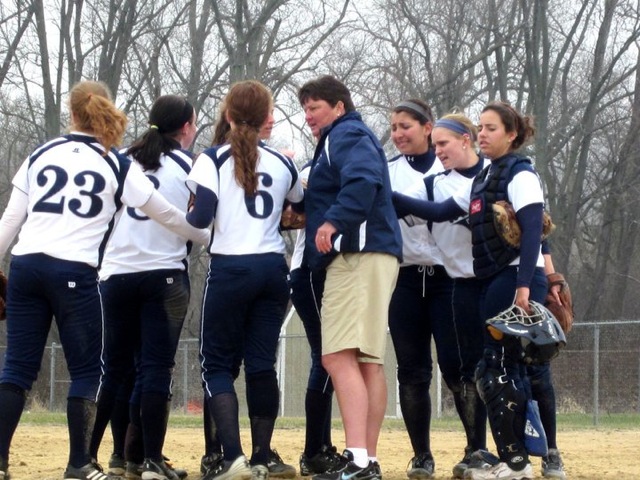 Powerhouse Cathy Kaye started the Vikings out in the first game with an over-the-fence home run to left center. Ripon was not phased, and responded with run-scoring hits in the second and third. Later, the Red Hawks scored their final run off of a suicide squeeze in the fifth.

The Vikings scored again in the seventh in a last attempt to get back on top, but were not able to turn the game around. Emily Perish began the inning with a double. She was moved to third by a ground out to the pitcher by Mary Diduch, and then home by Alex Chiodo’s single to center field.

The nightcap started roughly for the Vikes, with Ripon scoring three runs in the first inning. The Red Hawks scored again in the third, which was enough to hold the lead for the entire game.

The Vikings started their scoring in the fifth, led again by Kaye. Gaelen Lombard-Knapp was walked to first when Kaye blasted another homer to center field, her fifth of the season, bringing the score to 2-4. During the sixth, Lawrence scored its final run of the season. Shannon Murray singled up the middle and Cory Paquette pinch ran for her. Paquette advanced to second from Perish’s sacrificed bunt and then scored off of Chiodo’s double to left center.

Although the season is over for the girls, the players are already anticipating next spring. “I’m already looking forward to next season after the note we left off on at the end of this season,” said Murray. “We left Ripon with losses but not necessarily defeated. We came away from those games knowing that this is a team that doesn’t give up no matter what. Playing Ripon in those last two games proved that.”

The team’s record wasn’t what they had hoped (13-16), but positives have still come out of the season as a whole. Diduch said, “This season has really been a lot of fun. I love the chemistry of our team, and I think next year is going to be really good for us. We had such an amazing level of talent this year so I’m excited to see what next year has in store for us.”

In hopes of a winning season next year, the team has some things they want to improve. “I think our biggest challenge that we need to work on as a team is our mental side of the game,” said Diduch. “I truly believe we could have won every single one of our games. Small, stupid mistakes always ended up screwing us over in the end. If we diminish those to a minimum next year, we will be good to go.”

As for the offensive side improvements, Diduch believes the team needs to get their bunts down and be productive as batters. “One of the biggest things I learned this year was [from] Shannon,” said Diduch. “She taught me that it doesn’t matter what my numbers are in the book. What’s important is how productive I am for the runners on and the girls coming up to bat. Next year we need to be productive up to bat and not let those pitches thrown at us go to waste.”

The team will be working hard throughout the year to come back strong, but they will be missing a major component next spring: their standout senior Carli Gurholt. On the loss of their senior, Diduch said, “Our team is without a doubt going to miss Carli. She taught us a lot about what a true athlete is, with her intense desire for the game.” Gurholt led the team this season with a batting average of .421 and had the second most RBI’s — 24. Her slugging percentage — total number of bases divided by at bats — also led the team at .807, and she had three home runs.Hopefully the team will be able to adjust next year to the loss of a great player.

Mackenzie Dwyer (Photo courtesy of Carli Gurholt) Lawrence University’s softball season came to a bitter end Monday with two Midwest Conference losses to the Ripon Red Hawks, 3-2 and 4-3. To qualify for the Midwest Conference Tournament, the team would have needed to win both. Powerhouse Cathy Kaye started the Vikings out in the first…