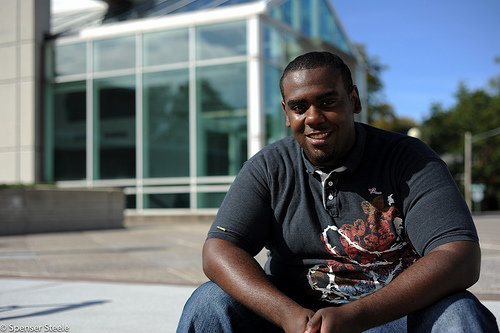 (Photo courtesy of the artist)

Mike Pope has some busy pipes. A senior vocal performance major, Pope is a member of Associate Professor of Music and Teacher of Voice Karen Leigh-Post’s studio, studies jazz with Lecturer of Music and “local superstar” Janet Planet and fronts a pop cover band, Mike Pope and the Papal Schism.

Initially interested in music in the eighth grade, Pope made the “best decision of his life” and joined the Chicago Children’s Choir, consequently learning to read music and play the piano. As his musicianship skyrocketed throughout high school, Pope made another “amazing decision” — to enroll at Lawrence.

The decision was indeed amazing, as Mike can be seen all over campus singing and making people groove. Whether he’s performing a classical piece or rocking a badass rendition of “Beat It,” Mike Pope is definitely making an impact on the Lawrence sound.

When asked about the influence of his voice professors, Mike remarked, “I love both of my voice teachers and could not imagine myself with any other ladies. They are both intelligent, hardworking women who have made their own successes in their respective fields of music.

Discussing his band, Pope again sings praise, saying, “A man can only be so lucky to find five other guys who have so much talent and musical expression. There is just such a great chemistry. The love of music and attention to detail that I get from these guys has been unmatched.”

Moreover, Pope emphatically voices his gratitude about performing with one of his heroes, pointing to the opportunity of singing alongside Dr. Ysaye Barnwell at the 2010 Fox Valley Martin Luther King, Jr. Celebration as his favorite musical experience at Lawrence.

He noted, “I felt so honored to share a stage with such a vocal legend. She was so expressive, and just a downright good person. If you don’t know who she is, I encourage you to Google or YouTube her and ‘Sweet Honey in the Rock.’ Great music!”

As for the future, Pope aspires to be a professional singer. He hasn’t chosen if he will go into jazz, classical music or pop and R&B, but he plans on attending grad school in a big city such as Chicago, Boston or New York.

Until then, though, Mike is gearing up for two performances in the spring, his March 31 classical recital and a jazz/pop recital in mid-May.

Before you attend Mike’s recital, though, keep your ears open while you’re walking around campus. Next time you take a trip to practice at the Con, venture to a choir performance, stumble over to a weekend party at one of Lawrence’s houses or go to a gig in the campus center, you just might just hear Mike Pope belting it out.