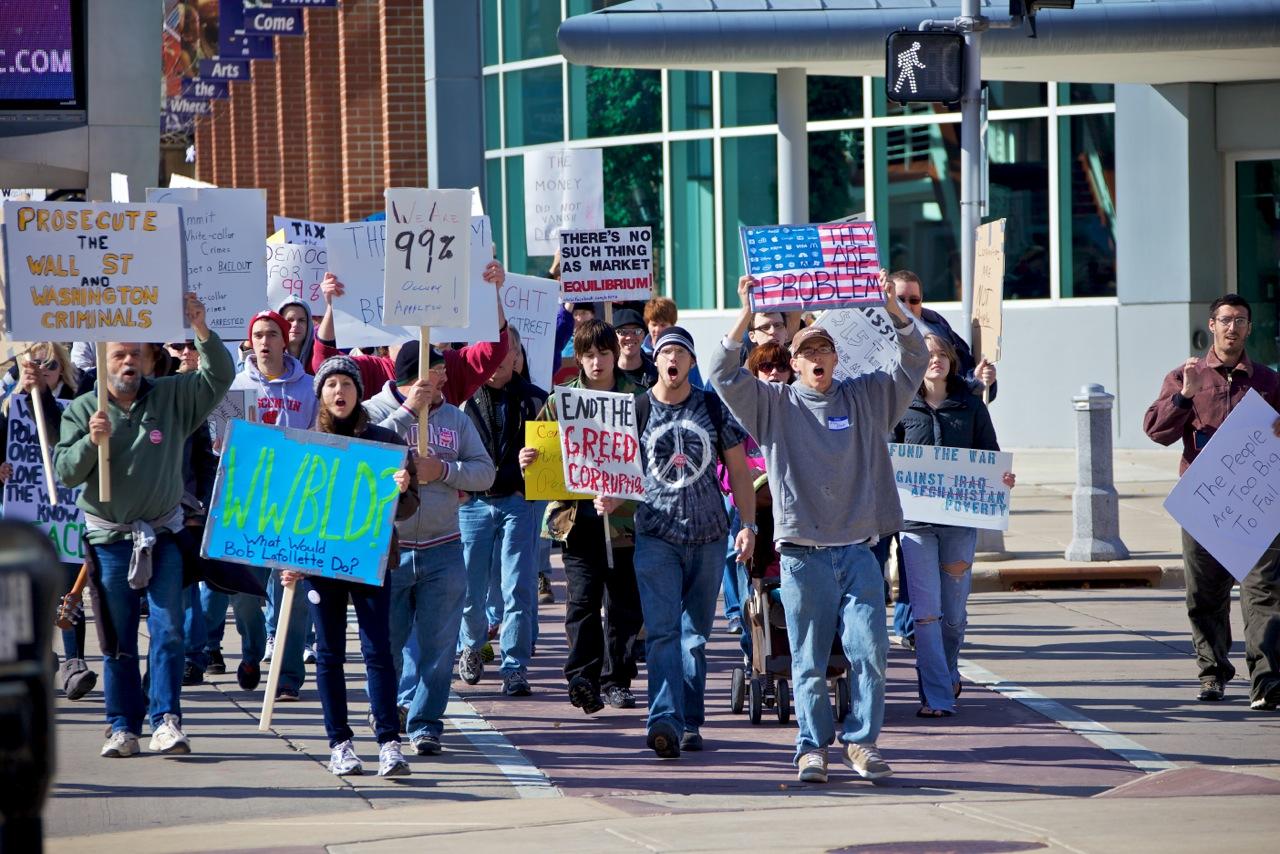 Protestors from the Appleton and Lawrence communities gathered Saturday, Oct. 15 for an Occupy Appleton protest as part of the national Occupy movement.

The Occupy movement is an on-going protest across the nation inspired by the Occupy Wall Street protests, which have been growing in New York since September. These protests aim to raise awareness about what the protestors believe is the overextension of corporate power in government.

“I believe there’s a problem with corporate influence in politics,” said protesting senior Josh Trotter. “Corporations should have no influence in legal decisions — to a reasonable extent.”

Trotter’s feelings were echoed by the 200-300 people who attended Saturday’s protest in Appleton, armed with homemade signs like “End the greed and corruption” and “Stand for something or fall for anything.” Ten of these protestors were students and staff from Lawrence University.

The issue was not absent from the Lawrence campus prior to the protest. In early October, juniors Austin Federa and Adam Kranz fundraised for money to send to buy food for the Occupy Wall Street protestors.

Kranz said, “I was excited to see the Appleton community get politicized.”

Occupy Appleton was organized largely by word of mouth and online networking, in keeping with the spirit of the power and equality of all people the protest is attempting to promote.

Decisions regarding the date of the protest were made by the General Assembly, led by facilitators who directed discussion. All decisions were accomplished via group vote.

Protestors were given reminder cards about the rules of a peaceful protest — no violence and no personal attacks, and to keep in mind that police and families are present. Since amplification devices are against police rules, all Occupy protests, including Appleton’s, use a human microphone system. A facilitator spoke in short phrases, pausing in between to allow people up front to repeat the words to those in the back who could not hear.

After gathering from 9 a.m. to 12 p.m. at Jones Park, protesters marched down College Avenue to Chase Bank, where they stood for several hours before moving to Houdini Park. Protestors of all ages were represented.

“On the community level we all inspired each other to continue with the movement,” Trotter said. “People were driving by and honking in support, and that was really cool.”

Another protest and march is being organized for Saturday, Oct. 22. Protestors will be meeting at 10 a.m. in City Park and will begin marching at 1 p.m.

Associate Professor of Chemistry Mary Blackwell is organizing a group of interested Lawrence students and staff to support the Occupy Appleton movement. Interested members of the Lawrence community may email her to help support the movement.

More information about the local Occupy Appleton movement can be found either on the “Occupy Appleton” Facebook page or at occupyappleton.org.

Trotter encouraged students to get involved with the protests, even if it seems like it has no direct effect.

“We raised a lot of attention about the issue,” he said. “If you want an outlet, this is the start.”

Chelsea Johnson (Photo by Austin Federa) Protestors from the Appleton and Lawrence communities gathered Saturday, Oct. 15 for an Occupy Appleton protest as part of the national Occupy movement. The Occupy movement is an on-going protest across the nation inspired by the Occupy Wall Street protests, which have been growing in New York since September.…