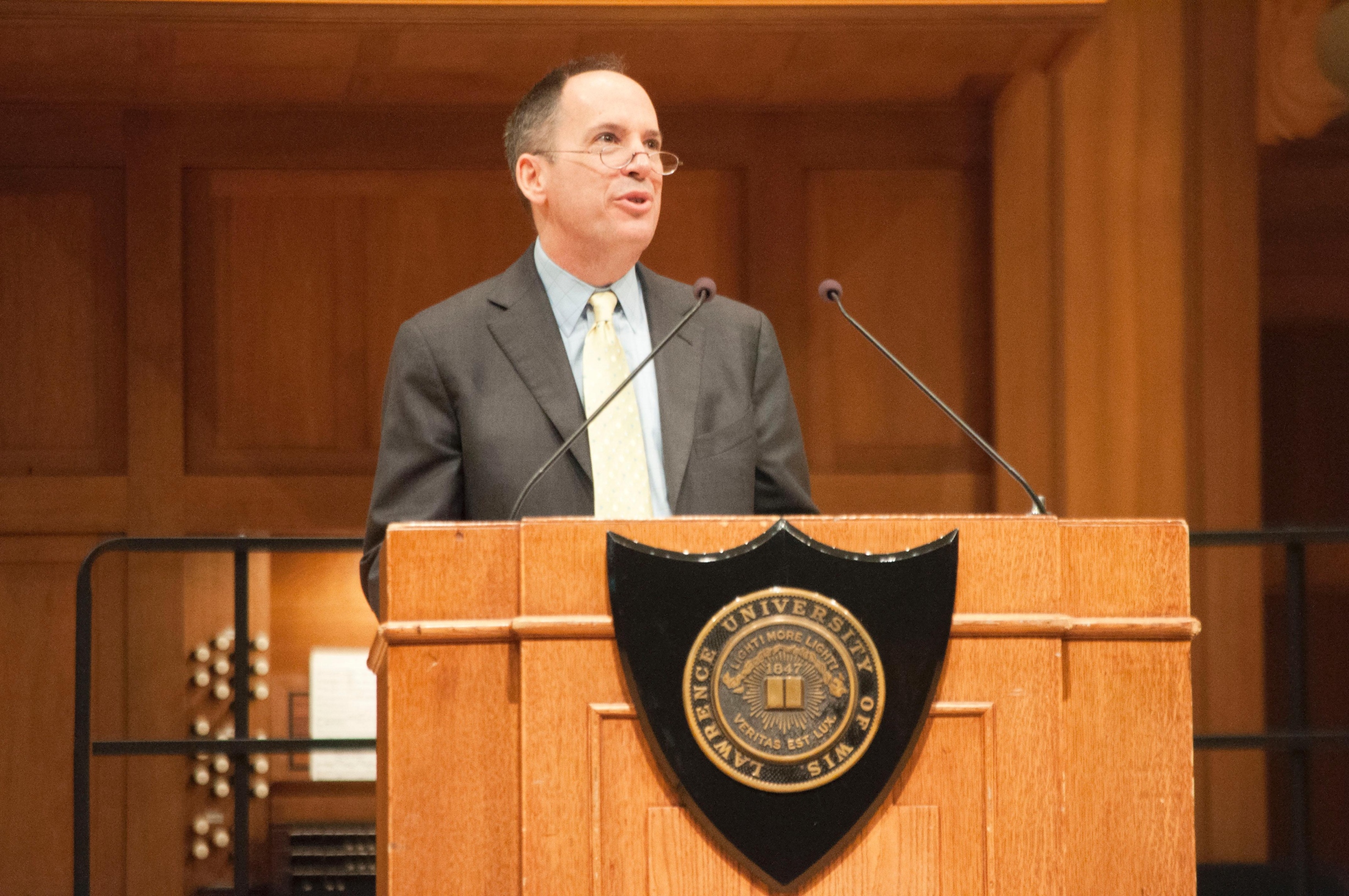 aaA standing ovation from Lawrence University students, faculty, and community members welcomed the 16th president-elect Mark Burstein for the first time in Memorial Chapel on Thursday, Jan. 3. During his convocation, Burstein outlined his passion for the liberal arts, discussed his plans for the university, and answered questions from the Lawrence and Fox Valley communities.

Beginning with the declaration that “if there is any constant in our world today, it is change”, Burstein discussed his desire for progress at Lawrence, continued investment in the campus experience, financial equilibrium for the community while keeping a Lawrence education affordable, and maintaining a dynamic relationship with the surrounding Appleton community.

Questions submitted to the Communications Office the day before ranged from inquiries about the affordability of a Lawrence education, the scholar-athlete experience and how he planned to increase the campus’ sense of community.

“I am hoping that there will be a two-way dialogue and I look forward to hearing about their aspirations…I believe that there are already ideas on campus today…I don’t believe anybody my age or older has any ideas about how to improve student life. We need to rely on students and the creativity of students to think about how to make student life more engaged and alive here.” ,said Burstein.

In response to a question from a Swedish alum from the class of 1994 about supporting diversity, Burstein answered , “We need to be a diverse place. I also believe the workplace has become so much more diverse that managing across diversity is critical.”

As an undergraduate alumnus of Vassar University, Burstein’s early encounter with the liberal arts “taught [him] how to learn”. After various accomplishments in consulting and finance, including founding New York City’s recycling program and funding moderate income housing, Burstein found his way back into the world of higher education at Columbia University and then finally, as the current executive vice president at Princeton University since 2004.

“wwIn many ways, coming to Lawrence is like returning to my roots”, shared Burstein.

Chair of the Lawrence University Board of Trustees Terry Franke’68, who introduced Burstein to the stage, announced “I don’t know the last time the chapel was this filled.” Franke then thanked all who had taken part in the extensive search for the new president, which began in February of 2012.

Franke declared, “We received over 350 responses to help create a new profile for our presidency and [executive search firm] Isaacson, Miller said it set a record for responses.”

Though 12 candidates for the presidency were interviewed in Chicago and a group of finalists were invited to visit campus, Franke revealed that Burstein was the only candidate who secretly toured Lawrence University. During Labor Day Weekend, junior Pablo GalvÃ¡n-Tello unknowingly guided Burstein around campus, answering questions about Lawrence’s academics and campus life. Burstein had led Galvan-Tello to believe that his nephew was interested in applying to Lawrence, a guise GalvÃ¡n-Tello did not realize until the announcement of the new president about four months later.

In a letter to Franke about the new president, GalvÃ¡n-Tello wrote, “Mark never acted like he was superior,” adding to Franke’s extensive list of the new president’s positive attributes. The list also included the following traits: collaborative style of leadership, inspires confidence, and engenders trust.

After the talk, a reception was held during the evening from 5-7 p.m. in the Warch Campus Center Somerset Room where a line snaked from one end of the room to the other. For over two hours, Burstein shook hands and talked with community members. He also made an appearance at the Winter Activities Fair the next evening, even getting sorted into Slytherin House by the Lawrence University Magical Organization of Students.

“This worries me because I don’t particularly like snakes,” Burstein revealed.

Before Franke and Burstein took the stage for the convocation speech, audience members streamed into the chapel to the music of Lecture of Music and University Organist Kathrine Handford, and the fifty members of Concert Choir under the direction of Associate Professor of Music and Co-Director of Choral Studies Phillip Swan. For those interested in viewing a webcast of the convocation or learning more about Lawrence University’s 16th president, Burstein’s talk is available at http://www.lawrence.edu/the16thpresident/.