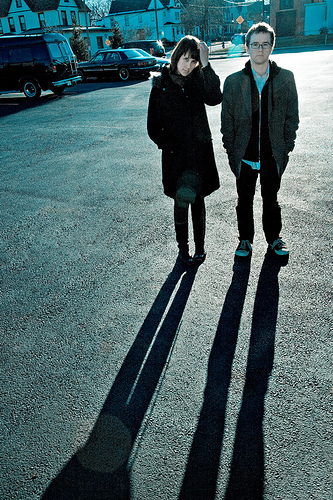 In this day and age, when pared down and folksy is the name of the game for most indie musicians, there’s no shortage of folk-rock duos. Some hit heavier than others but most come and go rather quickly, with little left to show for it.

Wye Oak of Baltimore, Md., however, is different. Comprised of Jenn Wasner on vocals and guitar and Andy Stack on drums and keys, this duo has carved themselves a substantial niche in the indie-rock community and their latest release, “Civilian,” is, for many, proof that they’re here to stay.

In the past Wye Oak’s songs had a distinct arc to them. They’d begin with ambient, shoegaze-esque meandering and then abruptly collapse into a few distorted concluding bars. With “Civilian,” those heavier moments are further pared down in favor of heightened lyricism and introspection. This decision fits perfectly with Jenn Wasner’s maturing voice both as a singer and poet.

Wasner’s delivery has developed substantially since Wye Oak’s sophomore release, “The Knot,” and her lyrics are now colored with the nuances of an intelligent young singer. This newfound artistry adds a more organic feeling to the music, allowing the band to slip into the heavier sections rather than dropping them on their listener’s heads.

And though her lyrics are still concerned with suburban confinement and complicated love, she leaves out much of the melodrama of previous records, letting her guitar provide the gritty subtext to new, more concrete imagery.

The album’s title track, though not my favorite, epitomizes Wasner’s maturity, complete with a full-blown guitar solo and lines like, “You still sleep in the bed with me / My jewelry, and my baby teeth.”

Andy Stack, the other half of Wye Oak, has also come into his own artistically with “Civilian,” playing drums with his right hand and keyboards with the left, all while manipulating loops and occasionally providing backup vocals. Though his role is less prominent, his playing seems much more in tune with the intent of each song.

In the past, Wasner and Stack seemed to be almost vying for attention, with Stack’s cymbals sometimes completely drowning out the melody. Here he seems more comfortable letting Wasner assert herself musically, particularly on tracks like “Dog Eyes,” in which he takes a backseat to his bandmate’s visceral guitar work, and “Plains,” in which he reserves all his gravitas for a few short breakdown sections.

My favorite track off the album, “We Were Wealth,” though likely to be spurned by fans of “The Knot” and “If Children,” seems to be an indication of the band’s general direction. The song has a minimalist, post-rock feel to it and the band performs it with ease and grace reminiscent of fellow Baltimore natives Beach House.

Yet comparing Wye Oak to Beach House is too easy a connection. Though both bands are definable as “indie rock,” Wasner and Stack’s songwriting, in my opinion, is broader than that and will only continue to mature as time goes on.

Whether or not Wye Oak sounds like a band for you, I’d highly recommend at least getting a taste for their talent. And luckily for you — and me — they’ll be playing a free show April 6 right here at Lawrence. So come out and see for yourself; I doubt you’ll be disappointed.

Justin Jones (Photo courtesy of Dan Stack) In this day and age, when pared down and folksy is the name of the game for most indie musicians, there’s no shortage of folk-rock duos. Some hit heavier than others but most come and go rather quickly, with little left to show for it. Wye Oak of…