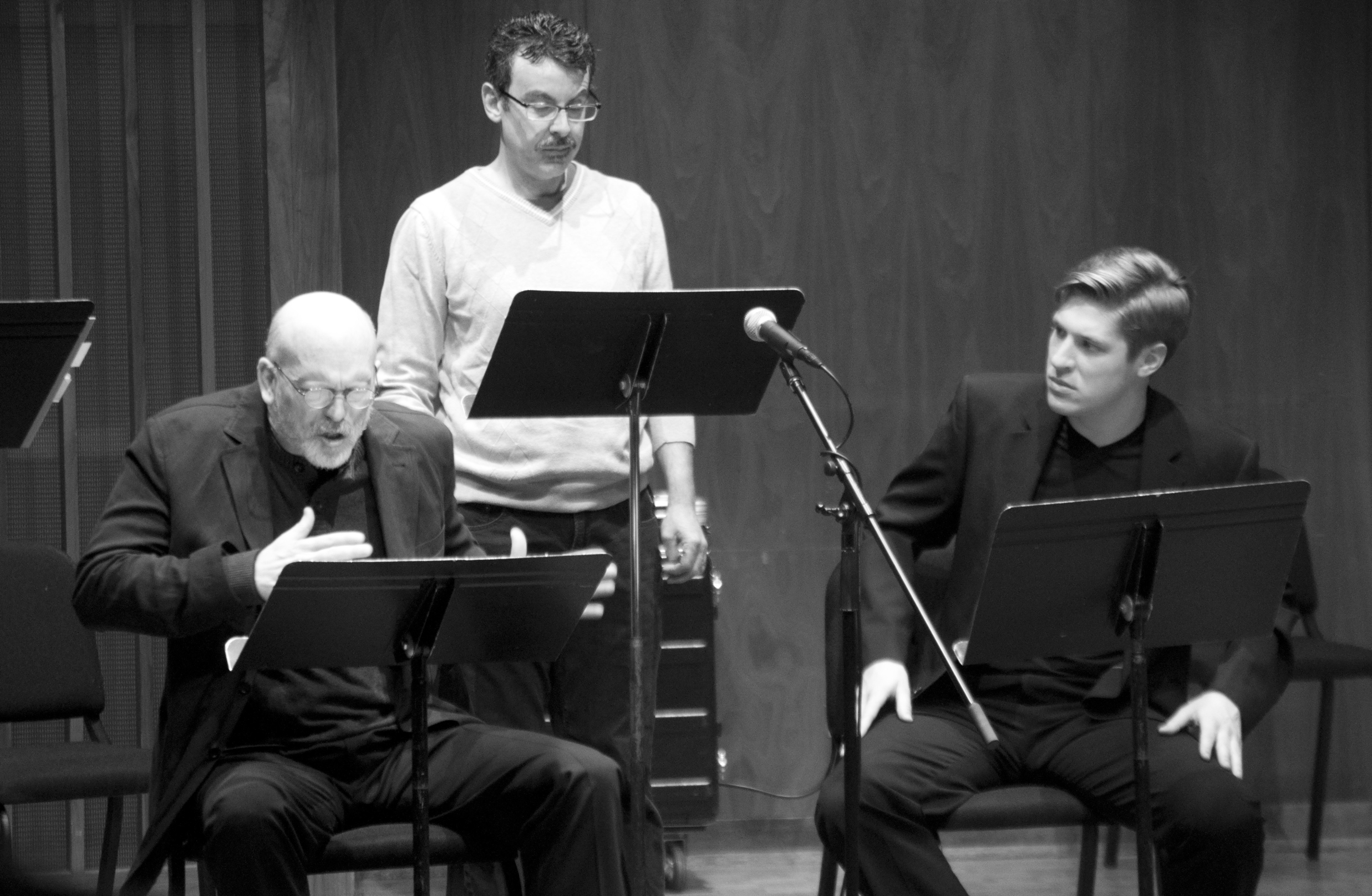 The Quartet itself, comprised of Troy, Associate Professor of Music and Teacher of String Bass Mark Urness, Professor of Music Dane Richeson and Dean of the Conservatory Brian Pertl, kicked off the evening’s diverse program with a series of poems, read by Troy and musically interpreted by the others in a fluid array of styles and textures.

Two poems by Lawrence Ferlinghetti, “Junkman’s Obbligato” and “I Am Waiting” framed the concert’s first half. Both were largely groove-oriented, urged on by an insistent pulse. Richeson played a variety of Western and non-Western instruments, most notably the cajón and the single-stringed Berimbau.

Fittingly, Troy’s delivery was reminiscent of Gil Scott-Heron’s so-called “proto-rap” from the early ‘70s, falling in and out of time with Richeson as Urness and Pertl built engrossing yet well-balanced textures and duets from the surprisingly cohesive timbres of string bass and didgeridoo.

In between these two long, declamatory numbers, the quartet rendered three rather disparate poems. Shakespeare’s “Sonnet 129” came first, flowing nicely out of the fast-paced tempo of “I Am Waiting” into a more brooding, undulating pace, which suited the poem’s somber subject matter.

Troy’s performance played on the traditional meter of the poem in interesting ways, as did Pertl’s unexpected outbursts of sonic energy.

Next was “Adultery” by James Dickey, a seemingly dark poem to which Troy brought a dry sense of humor, underlining Dickey’s pervasive use of sexual imagery and innuendos. A gradual accumulation of different textures, including some more brilliant interplay between Pertl and Urness, served to underscore the poem’s anxious passion.

Troy dedicated the following piece, a rendition of Mary Oliver’s “Poem for my Father’s Ghost,” to the memory of his father, playing a Tibetan singing bowl intermittently to create moments of prayer-like serenity and contemplation. The other players followed suit as they developed a sparse, elegiac texture to surround Troy’s nuanced narration.

The concert’s second half was dedicated to “L’Histoire du Soldat.” Originally conceived as a work to be “read, played, and danced,” L’Histoire has taken on many forms since its creation in 1918, as is the case with many of Stravinsky’s theatrical works.

It is often performed simply as a concert suite, though there have been several ballet versions performed in recent years.

In contrast, Saturday’s performance gave equal weight to the libretto and the music, while eliminating the dance aspect. Troy narrated while the other speaking roles, the devil and the soldier, were filled by Visiting Assistant Professor of Music and Teacher of Voice John Gates and Alex York ’14, respectively.

Richeson, Urness and Pertl were joined by five additional faculty members to form a septet with Associate Professor of Music and Director of Bands Andrew Mast conducting. Altogether they comprised one of the largest contingents of faculty performers that I’ve seen perform in one ensemble during my time here at Lawrence.

Though their size was impressive, I think it may also have been partially responsible for the occasional blending and intonation issues that poked up in their performance; only because I find it hard to believe that a group of professors as busy as ours could have found much time in common to rehearse this rather challenging music

But aside from a few minor setbacks, the ensemble’s playing was highly expressive, easily matching the energy of Troy’s urban, vernacularized libretto.

The text itself, though fresh and dynamic, was sometimes difficult to decipher. Although it was very clear where we were in time — the 1960s — and what the primary conflict was — good vs. evil — the details of the story were occasionally clouded behind layers of ambiguity.

Troy’s adaptation, which casts the soldier as a Vietnam vet who sells his fiddle (and his soul) to the devil in the back of a C-130, is full of abstract, near hallucinatory images that sometimes disoriented the plot of Ramuz’s original French libretto.

Drug references abound, as does a lingering sense of amorality, further impinging upon the clarity of the original tale and its old world aesthetic, both of which Troy intentionally subverts in his “New American Version” of the story.

Troy’s attempt to suggest a post-modern moral plane was embodied most fully in Gates’ performance as the devil. Charismatic, seductive and enigmatic, Gates’ devil brought to life the mannerisms of the ‘60s counter-culture that pervade Troy’s libretto, giving them new, more dangerous meanings.

Although York’s characterization of the soldier was, at times, too static to portray the stark shifts in affect and mood that the music and libretto suggest, he did bring a youthful energy to the part, which provided an interesting foil to the cynicism of Stravinsky’s music and Troy’s libretto.

Troy’s narration, which often intervenes in the narrative action, sounded much like his Ferlinghetti readings. But when accompanied by the octet or Dean Pertl’s improvisations on the didgeridoo, which were a surprising but effective addition to Stravinsky’s score, Troy’s intonation and phrasing took on new significance while tying the whole program together in a rather satisfying way.

As a whole, the concert was a collaborative tour de force, exhibiting a remarkably forward-minded approach to music, theatre and poetry, while bearing witness to a diverse range of forms, expression, and meaning.

As an ensemble, the
Jazz Poetry Quartet is a welcome addition to more traditional faculty collaborations that I hope will serve as a crossroads for such interdisciplinary creativity in the near future.