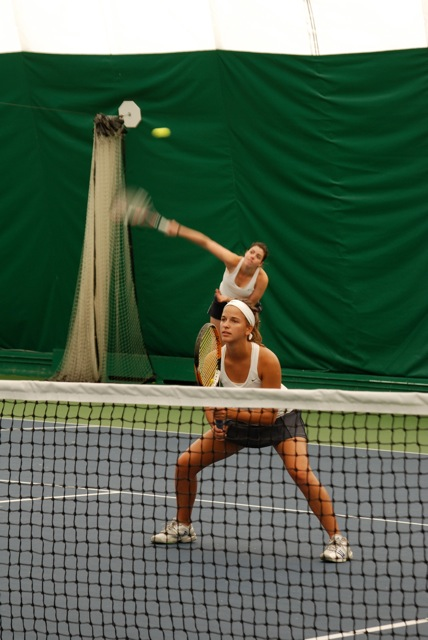 Beth Larson, Jenni Roesch, Gayatri Malhotra, Christina Schaupp and Hannah Geoffrey, the top five representatives from the Lawrence University women’s tennis team, traveled to Gustavus Adolphus College last weekend to compete in the Intercollegiate Tennis Association Regional Championships, a national qualifying tournament in which the top competitors from across the Midwest come to compete for a place in the National Tournament in March.

The Vikings had a great performance against a number of competitive teams, with three of the five women winning their first singles rounds. Senior captain Larson won her first two Friday matches vs. St. Catherine’s (7-5, 6-3) and Coe College (6-0, 6-1), earning her a spot in the championship bracket on Saturday. Junior Roesch and freshman Schaupp also won their first singles matches vs. Carthage and St. Catherine’s, respectively, but unfortunately lost in the second round and were eliminated from singles tournament play.

Larson played a tough third round on Saturday vs. UW-Whitewater’s Alexandra Bayliss, whose lack of sportsmanship appalled everyone who attended the match. Bayliss repeatedly swore and harassed Larson throughout the match, until Larson lost (5-7, 3-6), to the disappointment of numerous viewers who would have rather had class win over sass. Overall, the Vikings had four successful singles wins in the first two days and competed well against intense competition.

The two doubles teams also had a successful weekend. The Larson/Roesch duo won their first match against St. Mary’s College (8-6) but lost in the second round against Whitewater (4-8). Freshmen Geoffrey and Schaupp lost in the first round of doubles play, but came back with a win in the second round to take a spot in the consolation bracket play on Saturday. They lost during the third round vs. UW-Lacrosse, but as Malhotra stated, “We are proud that our freshmen doubles team made it to the second day of doubles play, which is difficult for any team to accomplish.”

When asked to comment on the Viking Women’s Tennis overall experience at the ITAs, Larson replied, “It was the best we have ever performed as a group at ITAs. It’s exciting that we can bring more people who can play at such high levels and gain further experience playing more competitive teams.” Malhotra also noted, “As a team we got to know each other on a different level and were able to bond over a really fun weekend.”

We should be very proud of our team, who not only performed well but also were great examples of sportsmanship throughout the tournament.