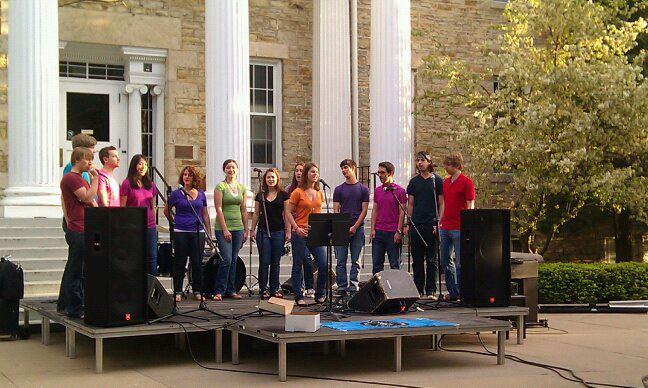 From the Lawrence Conservatory to the individual musical talents of members of our student body, music is an undeniable component of the Lawrence difference.

Meet the Appletones, a student-run a capella group aimed at enriching the Lawrence community through music. From public concerts to musical competitions, the Appletones strive to integrate students from the conservatory and college, offering an alternative to classical ensembles on campus.

The Appletones started during Winter Term of this year, when junior Daniel Vinitsky and freshman Eli Massey grew interested in the idea of starting an a capella group.

Said Massey, “Both of us were kind of shocked that there weren’t any a capella groups on campus… Finally, over winter break we decided we would [start one].”

Said Lewis, “I love that the Appletones is a student run group that is geared more towards the feel and enjoyment of music rather than the discipline of music. I love beatboxing because it requires a unique use of muscles.”

To gain membership, students were required to go through an application process. First, they were asked to sing thirty seconds of a pop song they felt would show off their voice. Then those who auditioned were tested on tonal memory and pitch matching abilities.

Everyone was then invited to call back, where they were asked to learn two parts of an assigned piece of music.

Said Massey, “They sang the parts solo and part of a bigger group. The beat box audition was kind of different. We had two beat boxers audition and it culminated in a beat box battle. As far as auditions go, we are looking for individuals with a good ear, nice tone and somebody that we could see fitting in with the group well.”

The Appletones recently applied for official recognition with LUCC and is waiting to hear back from the council. For next year, however, they’ve already got plans for growth. This includes another round of auditions in the Fall to recruit more talent. The Appletones are also looking to host weekly meetings open to all of campus. “The meetings will focus on things like booking Appletones shows, promoting the Appletones, and any other important Appletones business,” shared Massey.

The Appletones are also working toward developing a stronger campus and community presence.

“We’re looking to involve more folks and interact with more folks,” said Massey. The group has prioritized creating more sophisticated arrangements, tighter harmonies, and greater social bonds among group members. Continued Massey, “We’re [even] looking for people to arrange music for us. If you’re interested, definitely contact us. We may even be able to compensate you.”

In addition to recruiting a core group of members, the Appletones had their first performance at this month’s Jamnesty concert. They have one more performance planned this term, which will be in collaboration with Conchordance, the all-female a cappella group. The performance is May 29 at 7:30 p.m. in the Warch Campus Center’s Esch-Hurvis room.

Said Massey, “Lawrence is an amazingly-musical place, and I think it’s really important that we have a wide spectrum of stuff going down. As far as vocal music goes, before we basically just had classical, which is wonderful and really important, but I felt like the school was lacking an avenue for students that want to get involved with music but aren’t particularly passionate about classical singing. It’s a fun group because we’ve created a really strong bond and I’ve met new people or strengthened existing friendships and that’s always important.”

Tammy Tran Appletones perform at Jamnesty concert (Courtesy of Eli Massey) From the Lawrence Conservatory to the individual musical talents of members of our student body, music is an undeniable component of the Lawrence difference. Meet the Appletones, a student-run a capella group aimed at enriching the Lawrence community through music. From public concerts to musical competitions,…