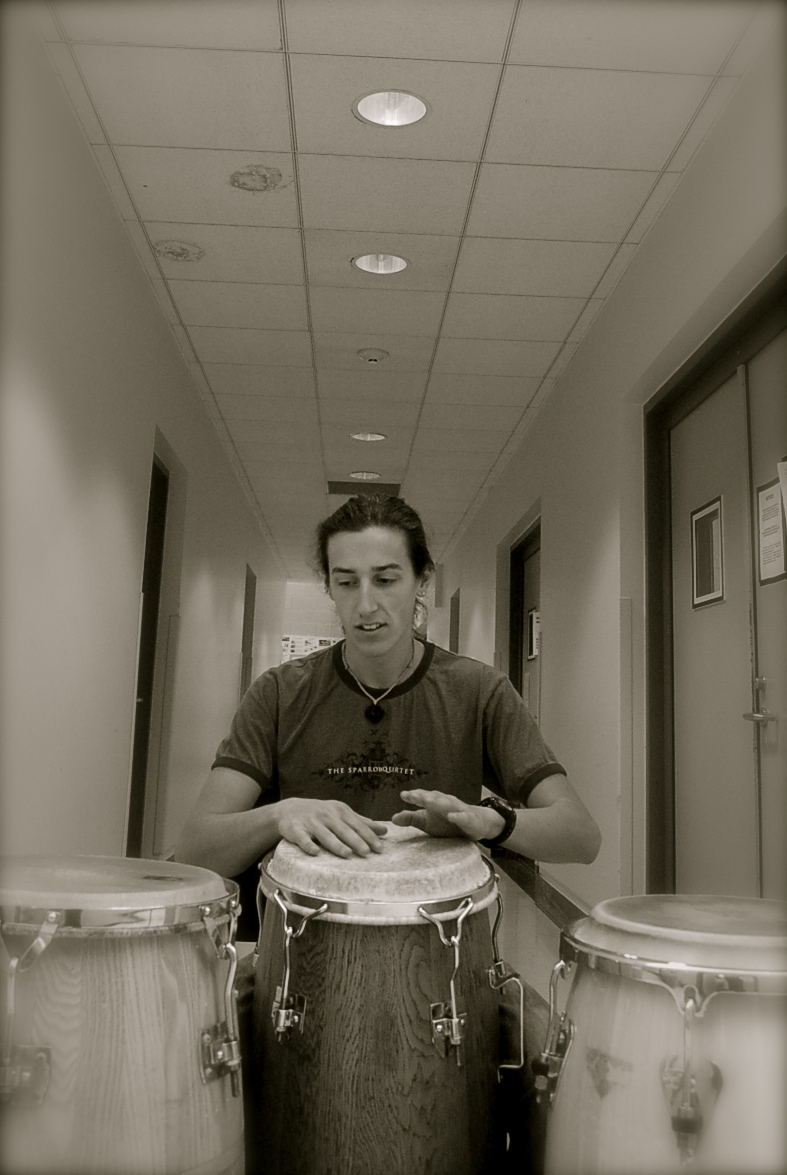 Everyone who has put on a recital knows how huge of an undertaking it is to put everything together. Each performance major in the conservatory must go through this grueling process of putting on a recital for his/her junior and senior years.

Eli Edelman ’15, a five-year student studying percussion performance and history with an emphasis in Latin American studies, could not wait until next year for his junior recital. He’s putting one on next week, in fact.

Edelman is sharing this recital with fellow friend and percussionist, yet another eager sophomore, Greg Riss. Last year, the two played a marimba duet together, and hit it off really well.

They liked each other’s playing, and over time they learned that they have similar tastes in music. Over the past year, they have been playing or jamming together, building a great chemistry.

The most interesting and exciting part of the program is one that brings all of Edelman’s interests and studies together. Edelman put together an Afro-Cuban percussion ensemble to perform various Bantu styles authentic to different cities in Cuba.

The styles will be successive, but non-stop, as each will connect into the other. Amongst the cowbell, chekere, cata and two higher-pitched support conga drums, Edelman will be playing the lead drum part, which improvises around a set pattern.

Inspiration for Edelman’s performance of this music includes multiple visits to Lawrence from percussionist and Afro-Cuban specialist Mike Spiro, who is a big influence on Edelman’s playing.

Edelman also went to Cuba last summer, making his own travel and lesson plans after a program that he had signed up for fell through. This is where Edelman learned the majority of his knowledge of the styles he will be presenting.

When he was abroad, learning from native Cubans, he noted, “It was an overwhelming amount of knowledge. Luckily, I recorded everything. I still listen back to those recordings and pick out something new.”

Edelman said, “The culture [in Cuba] was really exciting. They don’t have much in Cuba, so when they play music they have a blast!” That spirit and diversity of culture from city to city is what Edelman hopes to capture in his performance.

Edelman thinks that this extra recital will have many benefits for him. From a performance standpoint, this recital is great practice. Percussionists are generally not used to being in the spotlight, so this is a great chance to get right up there and showcase what they can do.

In looking toward next year’s recital, Edelman has chosen some more experimental and atonal repertoire this time around, because he wants to see how the crowd will respond, giving him a good sense of programming for next year.

More than anything, though, Edelman said that “to play [music] and present your hard work is a good feeling.”

Edelman puts in a lot of this hard work, as he is also a part of Lawrence’s Afro-Cuban percussion ensemble, Sambistas, Kinkaviwo, LUPE, Wind Ensemble and has recently started playing auxiliary percussion for on-campus funk band Porky’s Groove Machine.

Be sure to check out Edelman’s recital on Thursday, March 1 at 8 p.m. in Harper Hall for a unique, diverse and multicultural musical experience.