En Garde! The low-down on LU fencing, part one 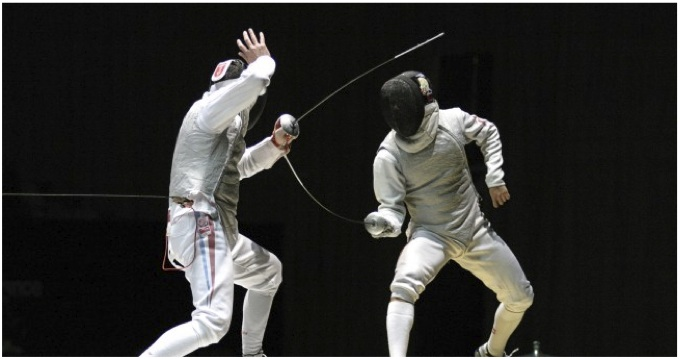 We have a fencing team here at Lawrence? Yes my friend, we do! In fact, the fencing team competes against major universities such as Notre Dame and Northwestern at the NCAA Division I level. Interested now? I figured you would be. So, what is fencing anyways? No worries. I am here to give you the low down on this 18th century sport!

Fencing competitors use one of three types of weapons. The first is a sabre, which is similar to a modern slashing cavalry sword. It consists of a triangular blade and then a guard to cover and protect the hand. The second weapon is the foil, a modern version of the court sword. It has a rectangular blade and weighs a little over a pound. The final weapon is the épée and it is similar to the foil only a bit heavier and has a stiffer triangular blade. Competitors usually have a favorite weapon in which they practice with and perform the best with.

Each weapon in fencing comes with a unique system of scoring. The sabre scores “cuts” as well as touches of the tip of the blade, or thrusts. However, a cut or thrust is only counted if it lands on a part of the body above the legs, excluding the backhand and fingers holding the weapon. To score using the foil weapon, competitors must hit their opponent with the tip of their blade and it must land on the torso.

Finally, the épée weapon also requires a hit from the tip of the blade to score. For this weapon though any part of the body can be hit, from the tip of the toes to the top of the head. How does one keep score in such a fast paced game? Well that’s an easy one to answer, for the swords and the protective gear are electrified. A simple touch of the blade onto the body of an opponent will send a signal through the electrical circuit, which sets off a light and a buzzer on the scoring machine, alerting both competitors that a point has been scored.

With an opponent coming after you with a sword, it is important that all competitors stay safe throughout the course of a match. Everyone must wear a protective jacket, pants and gloves, and women wear a chest protector. Special shoes are also worn as well as a mask to allow the competitors to see but keep the face out of harm’s way.

This is part one of three in a mini-series on fencing at Lawrence University.