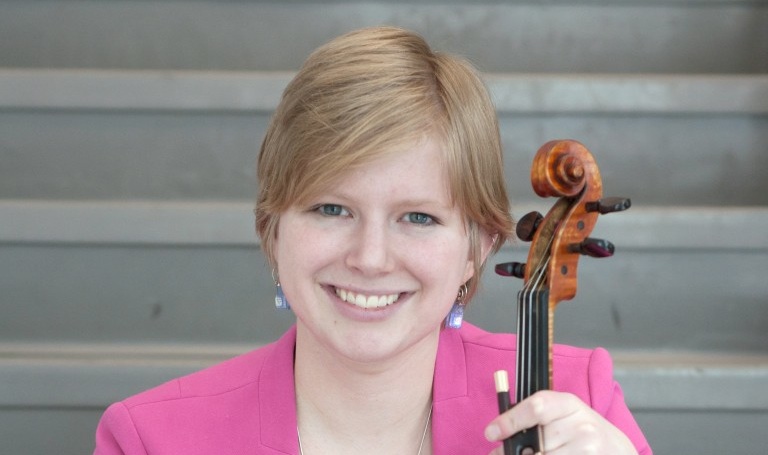 For Kajsa Schneider, class of 2014, presenting a recital is more than a performance opportunity: it is a way for her to become an even more valuable educator. A violinist from Verona, Wis. pursuing a Bachelor or Music Education Instrumental-General degree, Schneider has approached her recital with the goal of benefitting herself as a solo musician and her future students in their own musical endeavors.

Feb. 20 at 8 p.m., Schneider will perform an evening of music for violin that dabbles in a mixture of musical periods. Her choice to program a variety of genres was intentional and once again based on her desire to become a better educator; she wanted to become a well-rounded musician as she studied and truly became a part of each piece from its distinct period.

Acknowledging the Baroque period, she will perform a sonata by Archangelo Corelli, a piece Schneider describes as “blue” with its calm yet simultaneously active lines, a plethora of colors and subtle nuance to effectively present the work. Fast forwarding to the 20th century, Schneider will present a solo sonata by Sergei Prokofiev, which she describes as the color “red,” with its passionate and powerful lines, characters and timbres.

Schneider then chose a piece by virtuoso viaolinist Fritz Kreisler to focus on and improve her technique, but that doesn’t mean it is any less fun. She calls this Classical period scherzo “spunky and adorable.”

Lastly, she chose to program a piece she has been hoping to play since she first picked up her violin so many years ago. Schneider describes Edward Elgar’s “Salut d’ amour” as one of the pieces that has kept her playing violin. A “beautiful and heartbreaking” work, it will be a truly special moment for Schneider to fulfill her hope of performing this piece for an audience.

After I inquired about the recital preparation process, Schneider revealed that she loved delving into her music over break and becoming more than acquainted with each composer and piece. Not only is she committed to her role as a music educator, but she is also devoted to performing and preparing her own recital, which will be insightful to her students’ experiences in performing, composing and sharing music.

In addition to the range of musical works in her recital repertoire, Schneider has been dipping her toes in all sorts of musical genres while at Lawrence. A member of IGLU (Improvisation Group of Lawrence University), she has become involved in free improvisation and how it is incorporated into different levels of music education.

If you see her walking across campus, plugged into her iPod, she may be listening to jazz, bluegrass, folk or anything resembling her recently coined term “cross genre.” This violinist is all about being a diverse musician and exposing herself to new sounds and ideas, many of which help her fulfill her goal of being a role model and educator to her students. Needless to say, I wish she could be my music teacher.

Join Kajsa Schneider in Harper Hall Wednesday, Feb. 20 at 8 p.m. for a musical evening for all!