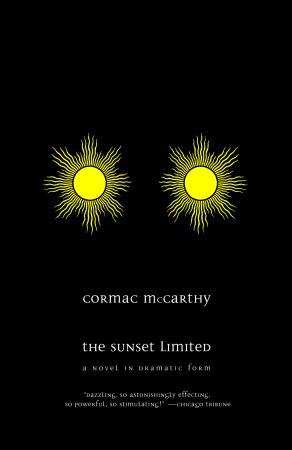 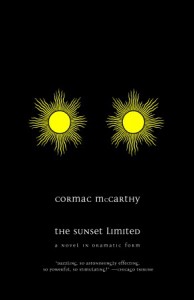 Famed amazing crazy person Cormac McCarthy, author of “Blood Meridian,” “The Road” and “No Country for Old Men,” finds no worth in literature that does not explore issues of life and death. Richard B. Woodward once described him as “a writer who renders the brutal actions of men in excruciating detail, seldom applying the anesthetic of psychology.” His prose is blunt, sparse, and unapologetic. It largely ignores traditional grammatical restrictions and is completely devoid of punctuation like semi-colons and quotation marks. Above all, it is gorgeous.

“The Sunset Limited” is his second published play, dubbed a novel in dramatic form, and albeit in condensed form it matches the splendor and agony of the novels for which he is so well-lauded.

This play departs from McCarthy’s regular stomping grounds along the United States’ southern border and instead opens in a Manhattan tenement. Two nameless men sit together, only differentiated by their skin color: Black and White. Black is a poor and amiable ex-con turned Evangelical Christian. White is an atheist and a professor who has just attempted to end his life by jumping in front of the eponymous passenger train, narrowly escaping death by Black’s intervention. The play follows the discourse between the two men as they challenge each other on religion, family, violence and the inherent value of life. Fans of McCarthy will feel much at home with these topics.

Both characters explicate flawed and thorough arguments, fascinating, full of the natural complications of oral communication, going in circles and failing to get their points across in a truly effective fashion. So says Black: “I look for the words, Professor. I look for the words because I believe that the words is the way to your heart.” When the play is over, one is not sure who had the more convincing points; one feels that both were defeated in some respect. It resonates so well. McCarthy constructs these arguments while carefully retaining the humanity of their holders.

White: “If people could see the world for what it truly is, see their lives for what they truly are without dreams and illusions, I don’t believe they could offer the first reason why they should not elect to die as soon as possible. I don’t believe in God. Can you understand that?”

Black: “I got what I needed instead of what I wanted and that’s just about the best kind of luck you can have. […] The light is all around you but you don’t see nothing but shadow. And you’re the one causing it. It’s you. You’re the shadow! That’s the point.”

One main critique regarding “The Sunset Limited” is that the play fails to actually be a play, in that it is essentially just two men talking without any action. But the dialogue is so rich that it manages to carry the storyline on its own: White’s lengthy diatribes on futility and hopelessness, Black’s simple wisdoms of faith and love. McCarthy expresses critical, unavoidable questions regarding existence, of how and why we exist and I cannot find a single reason to refrain from recommending it.

If reading isn’t your thing, “The Sunset Limited” was adapted into a movie starring Tommy Lee Jones and Samuel L. Jackson. If my penchant for people getting all existential and depressed in dirty places isn’t enough to sell you on this work, then maybe attractive late-middle-aged actors will.

Famed amazing crazy person Cormac McCarthy, author of “Blood Meridian,” “The Road” and “No Country for Old Men,” finds no worth in literature that does not explore issues of life and death. Richard B. Woodward once described him as “a writer who renders the brutal actions of men in excruciating detail, seldom applying the anesthetic of…