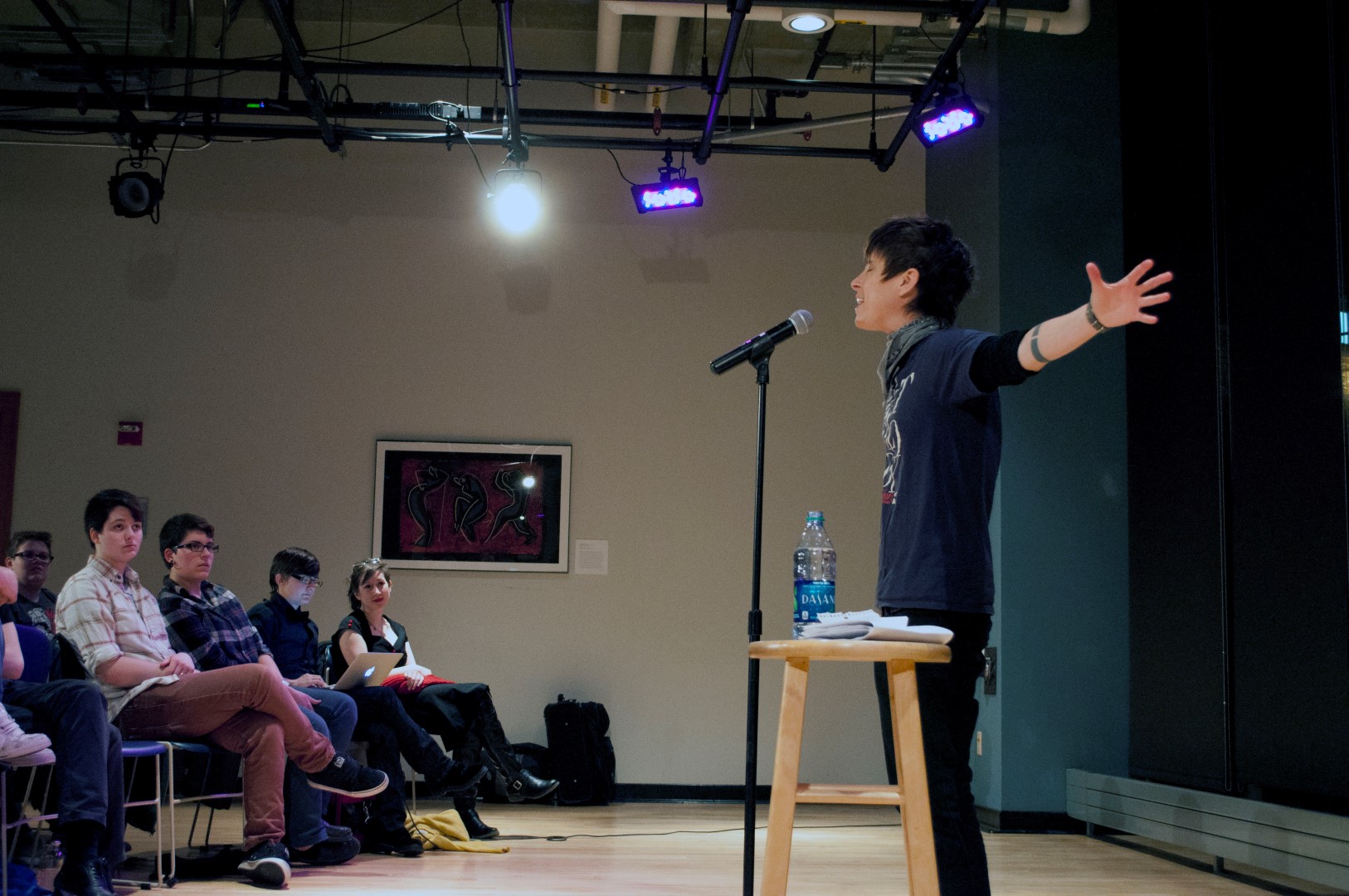 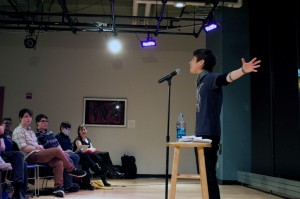 Renowned slam poet Andrea Gibson gave an intense performance discussing and urging her audience to action on the topics of gender, sexuality, love and war at Lawrence’s Warch Campus Center this past Wednesday, April 10.

Gibson performed to a room brimming over with students and community members, many of whom had recently seen Gibson perform and were eager to see her once again.

Gibson performed some of her most famous poems, including “A Letter to the Playground Bully” and “I Sing the Body Electric, Especially When My Power’s Out.”

“Her poetry is very special in the way that it talks about relationships and communicating with others,” said sophomore Alexis Cuozzo, a member of the campus organization Gay, Lesbian, Or Whatever (GLOW). “Dealing with hard times and personal strength is [also] very visible in her work.”

When asked about her writing style, Gibson said, “I think I have a different writing style than most people, in that I write really focused on sound. I’m maybe more like a songwriter than a poet, because I know the sound of the poem before I even fill in the words. Words are sort of the last thing that come to me in a poem […] It’s just the sound of it and the vibration of it is as important to me as the words on the page.”

Gibson, who was the first winner of the Women’s World Poetry Slam, is also known for her activism, which comes through in many of her poems.

“She pushes boundaries in a good way, I think,” said Cuozzo.

Junior Sara Johnson, who worked with the Campus Life Office to bring Gibson to Lawrence, agreed that Gibson tries to send a strong message through her words.

“It’s very powerful, but it’s also very uplifting,” said Johnson, the founder of the Creative Writing Club, which helped sponsor Gibson’s visit. “[While other poets] have incredible poetry, after listening for awhile, you just want to cry,” with Gibson’s poetry, “even though it’s talking about bullying or some really bad stuff, it ends on a positive note. It’s not just, ‘This sucks.’ It’s, ‘We should do something about this.’”

Gibson’s poetry has resonated across the United States and across the world. According to Gibson’s official website, “her work has been featured on the BBC, Air America, C-SPAN, Free Speech TV and in 2010 was read by a state representative in lieu of morning prayer at the Utah State Legislature.” Apart from this, Gibson frequently performs at universities, high schools and middle schools across the country.

In the days leading up to Gibson’s performance, a buzz had been gradually building on campus. Though Gibson’s name is not a particularly famous one, many people react when they hear the titles of poems that Gibson has written and performed. In particular, Gibson’s poem “A Letter to the Playground Bully” stirs recognition amongst the Lawrence student body, even for those who don’t know the poet’s name.

Freshman Keira Jett, however, was not among those who didn’t recognize Gibson’s name. She was eager for her performance from the moment she heard about it, citing Gibson’s visual language as what she admires most.

“You just can always say, ‘I’m sad,’” said Jett, who is a member of the Creative Writing Club, “but she has this way of taking all these words and so precisely stringing them together so that you understand exactly what she’s saying, and it just moves you. And also, her performance—reading her work is something, but listening to her is incredible. Because […]she just feels everything that she’s saying 100% and it’s moving and inspiring.”

Sophomore Joey Belonger said that he was amazed at how people came from distances to see Andrea perform at Lawrence.

“I thought she conveyed a lot of heartfelt and important information in a medium that we don’t normally get to experience at Lawrence,” said Belonger.Gibson also wanted her performance to be a sign of support for the LGBTQ community at Lawrence.

“I was thinking about how the school that I went to was the exact same size, and I never found another queer person on campus,” said Gibson. “I would just say, to really embrace the community here and lean on each other and to look out for folks that are going through a rough time and just support each other.”

Besides GLOW and the Creative Writing Club, Gibson’s visit to Lawrence was sponsored by the Alyssa Paul Maria Fund for Student Entertainment, which provides grants to organizations and individual students who want to bring unique events to the Lawrence campus.