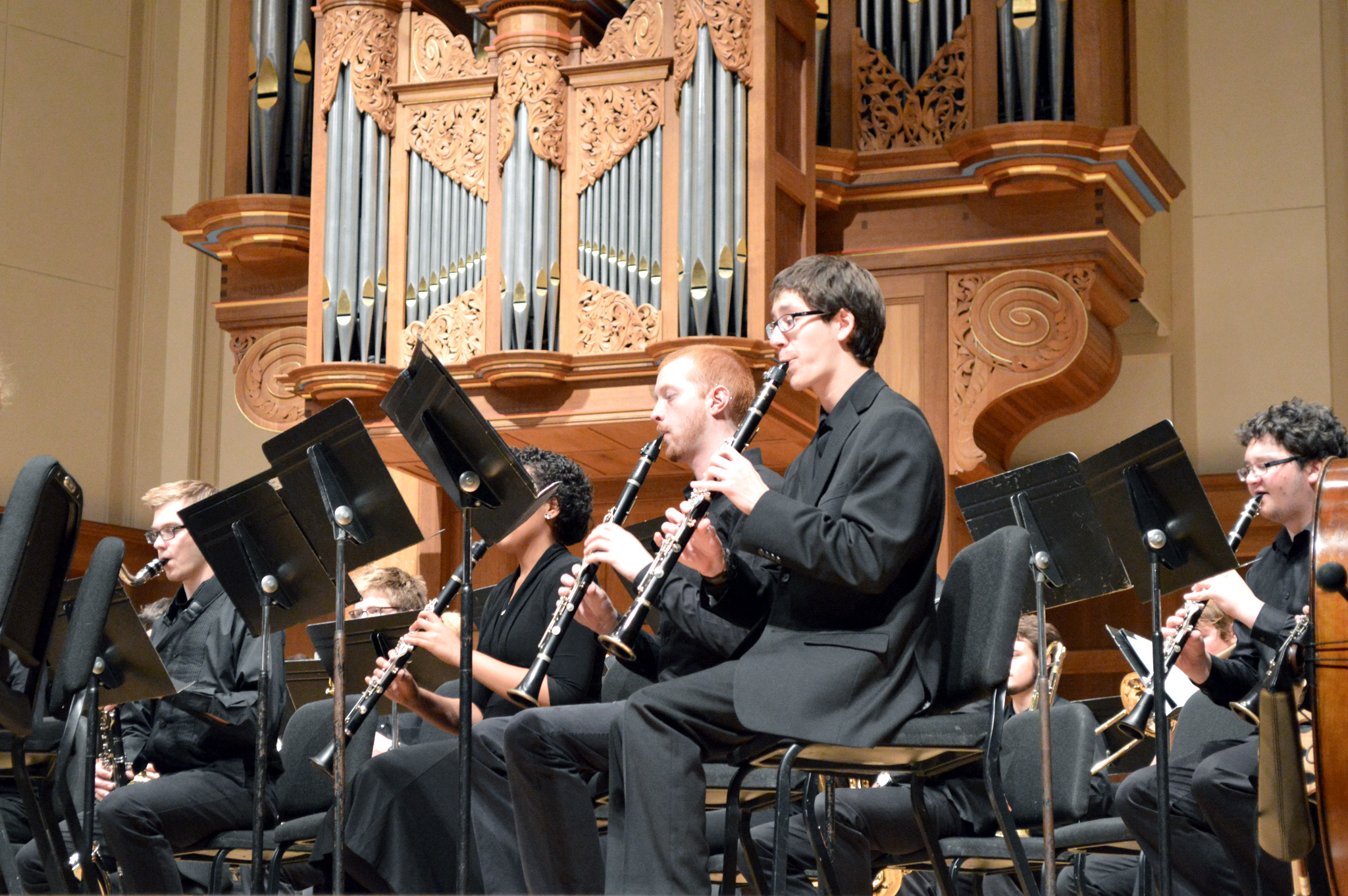 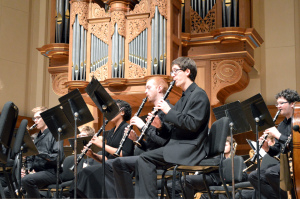 On Saturday, Oct. 18 at 8 p.m. the Symphonic Band struck up in unison. Players bounced in their chairs, reflecting the theme of this concert, “Dances and Dreams”, through the first piece, “Folk Dances,” by Dmitri Shostakovich and edited by H. Robert Reynolds.

Conductor and Visiting Assistant Professor of Music, Matthew Arau took a few moments to welcome the audience and introduce the next piece, “Incantation and Dance,” by John Barnes Chance. Arau presented the piece as a “magical dance.”

A lulling of flutes created an air of mystery and suspense was attained. A pattern of dark, low mystery contrasted with intermittent percussive shock until the chapel resounded with a final unified chord.

Next came “October” by Eric Whitacre. The piece began with sustained clarinets. A solo oboe broke the lull with near perfect intonation.

The Symphonic Band perfectly emulated the month for which the piece is named. Swirling winds and changing leaves were created by the music, a reminder of the true beauty of the season.

The last piece in the Symphonic Band’s program was “Danzon No. 2” by Arturo Marquez, transcribed by Oliver Nickel. This piece brought a whole new meaning to the night’s theme. Arau mentioned, “This piece is irresistible” and all were left moving in their seats.

This Mexican dance had lovely repeating themes specific to any mariachi band. Tempo sped. All players were bobbing; near chaos consumed the stage. A singular bass drum hit resounded, exemplifying an abrupt end the madness.

The Symphonic Band had finished, deserving the copious applause heard throughout the Chapel, and then the Wind Ensemble took the stage.

From the very beginning, tuning was impeccable. The program started right away. Their first piece, “Roman Carnival Overture” by Hector Berlioz, transcribed by V.F. Safranek, embodied its namesake with brightness. This group stood out for their togetherness and balance in every aspect of the music. A hanging chord astounded, ending the piece.

Conductor and Assistant Professor of Music, Andrew Mast also welcomed the audience and shared a description of the program. The next piece, “Bliss” by Michael Torke, came in five sections. All had the same rhythm, kept constant by percussive handclaps.

The first section highlighted upper woodwinds and the melody began in an almost jazz like fashion.

This second section was less static. Harmonies were varied a little while the ensemble continued to maintain admirable unity and blend.

The next, third section brought a much darker sound with low brass, low reeds and string bass. Saxophones stood out to convey an even jazzier tone.

The fourth section had a very mysterious key. Bigger note jumps were evident and brass contrasted what the rest of the ensemble was doing.

The fifth and final section produced a resolution. Simplicity created a happier, brighter tone. The piece built as claps were abandoned and replaced by snare drums. Building to near chaos, the piece ended with the ensemble still unbelievably together.

A story of sea travel was told through “Harrison’s Dream” by Peter Graham, the final piece on the repertoire.

A buzz-like sound created chaos. Dissonance followed and solos bounced around as a transition took place.

A beautiful, magical section followed; the majesty highlighted by none other than a harp. What beauty and mysticism did this talented group create! The section ended with ringing bell tolls.

Percussionists aggressively heralded the final part. A similar busy sound was recalled from the first section, but more order was conveyed. The themes built to pandemonium again. A resolution surfaced as the two previous themes mixed in an unimaginably successful way, and the attentive audience was sent out on waves of timpani rolls.

The audience raved with long bouts of applause.

The night brought many surprises and successes. Both ensembles should be commended for their production of beautiful music.