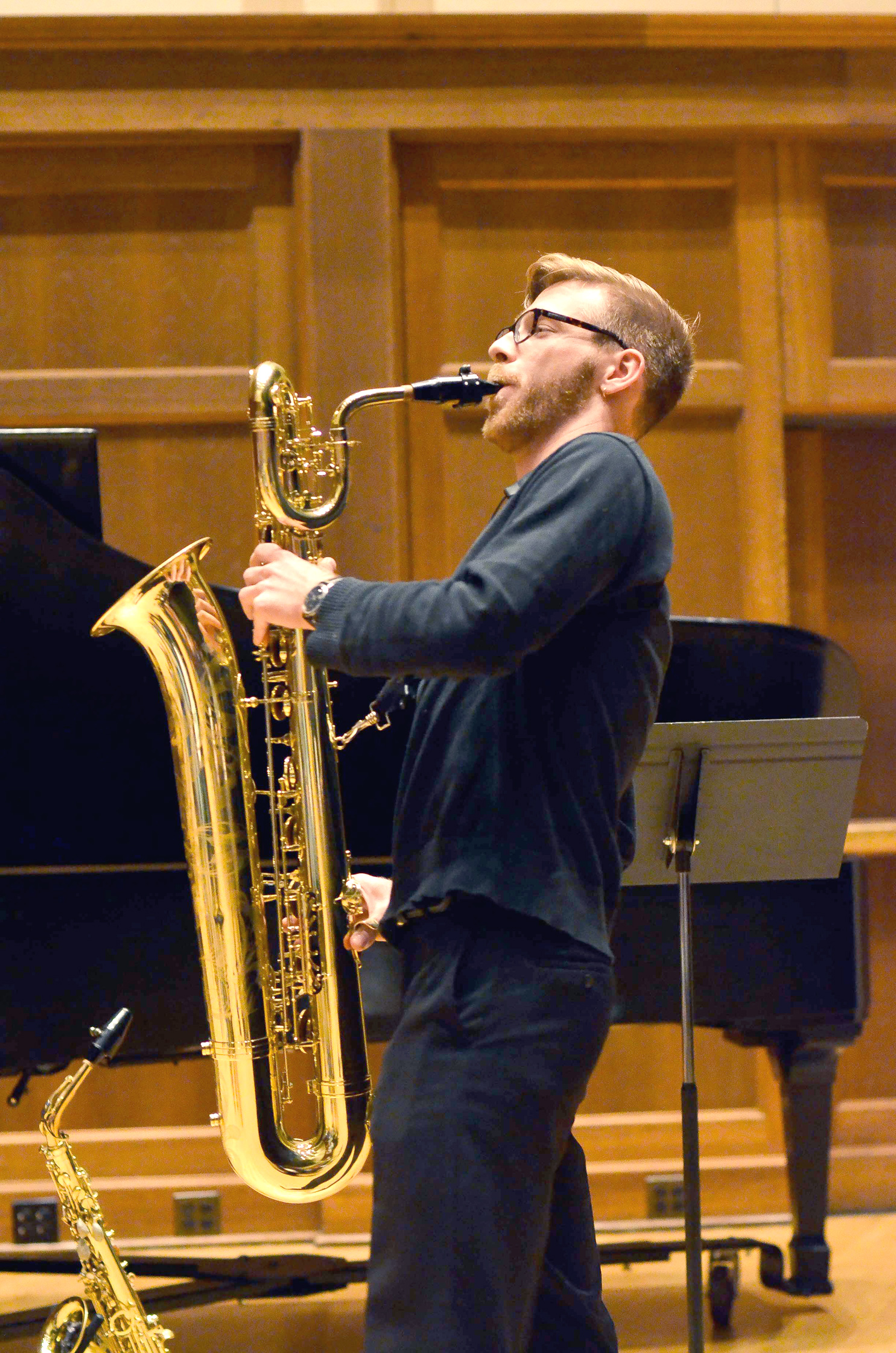 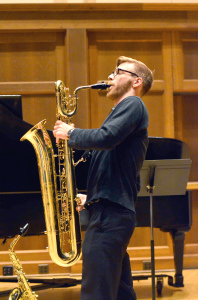 On Sunday October 26 at 8 p.m. Sumner Truax, a Lawrence alumnus, and fellow Eastman School of Music student Kurt Galván presented a recital unlike anything I could have possibly imagined.

It was going to be an unusual kind of recital. The music would be continuous for 60 minutes with a theme portraying a descent into madness. In addition to Truax on various saxophones and Galván on piano, the program was performed by a narrator reading poetry. That night, the narrator was none other than Lawrence’s own Director of Opera Studies and Associate Professor of Music Copeland Woodruff.

The lights darkened suddenly, then rose again to reveal a barefoot Woodruff muttering to himself. An eerie melody intertwined with his words as Galván’s fingers danced across the keyboard with dreamlike arpeggios. Low, sustained baritone saxophone notes seemingly came from nowhere.

This first piece, “Dream,” by John Cage, represented a euphoric state. As Truax later commented, it is the first stage in madness.

Woodruff bellowed again to signify the next piece, “Trou Noir,” by Robert Lemay, and the next stage in madness: the sudden yank.

A conflict between piano and saxophone grew. Galván began to pluck the strings of the piano, and Truax made unbelievably high noises through his saxophone. Chaos ensued, and the audience was pulled down a dark hole into madness themselves. Truax finally emerged, circling through the crowd while playing disturbing drones. Woodruff writhed; Galván and Truax spoke in tongues while still managing to play.

Woodruff was now on the floor surrounded by spilled pills. The third piece, “Silence for a Disturbed Yell,” by François Rossé, began with an odd calm. The softest whisper of a note was heard from Truax; Galván made forceful step-like notes. The tranquility was short-lived. Unpredictable crescendos and near screeching filled the chapel with unnatural sound; the tongues returned, followed by forceful breathing and brutal playing. Audience members began to question their own sanity as the murky environment of true insanity was created.

Suddenly, Woodruff chimed in with more reading. He slowly rose from his crouch on the ground. Truax picked up the soprano saxophone. Galván sustained a note while Truax went through torturous runs and trills. His playing was harsh, grating even. He later described this piece as “schizophrenic.” If he truly had his way, the lights would have shut off, the room would have been red, and the audience would have been full of terror. This was true madness.

A silence fell. Woodruff composed himself and put on his coat. Truax picked up the alto saxophone for the last four-movement piece: “Sonata for Alto Saxophone and Piano,” by William Albright. The whole program was centered on this wonderfully mad music.

The second movement, “La Follia Nuova,” the program’s namesake, brought a seeming resolution. There was a smooth beauty with an underlying mystery.

The third movement, “Will o’ the Wisp,” picked up a bit, revealing a true sense of melancholy and sadness. Dark piano chords repeated again and again in agony.

The fourth and final movement, “Recitative and Mad Dance,” truly emphasized a final madness. Truax went off with quick trills. There were eerie breaks and fluttering runs. Woodruff was at the stage door. The piano broke back in to resume the chaos. He was gone in the enigmatic madness.

It all ended with an incredible flourish of finality by both Truax and Galván. A second of silence is followed by a standing ovation.

By Lizzy Weekes On Sunday October 26 at 8 p.m. Sumner Truax, a Lawrence alumnus, and fellow Eastman School of Music student Kurt Galván presented a recital unlike anything I could have possibly imagined. It was going to be an unusual kind of recital. The music would be continuous for 60 minutes with a theme…