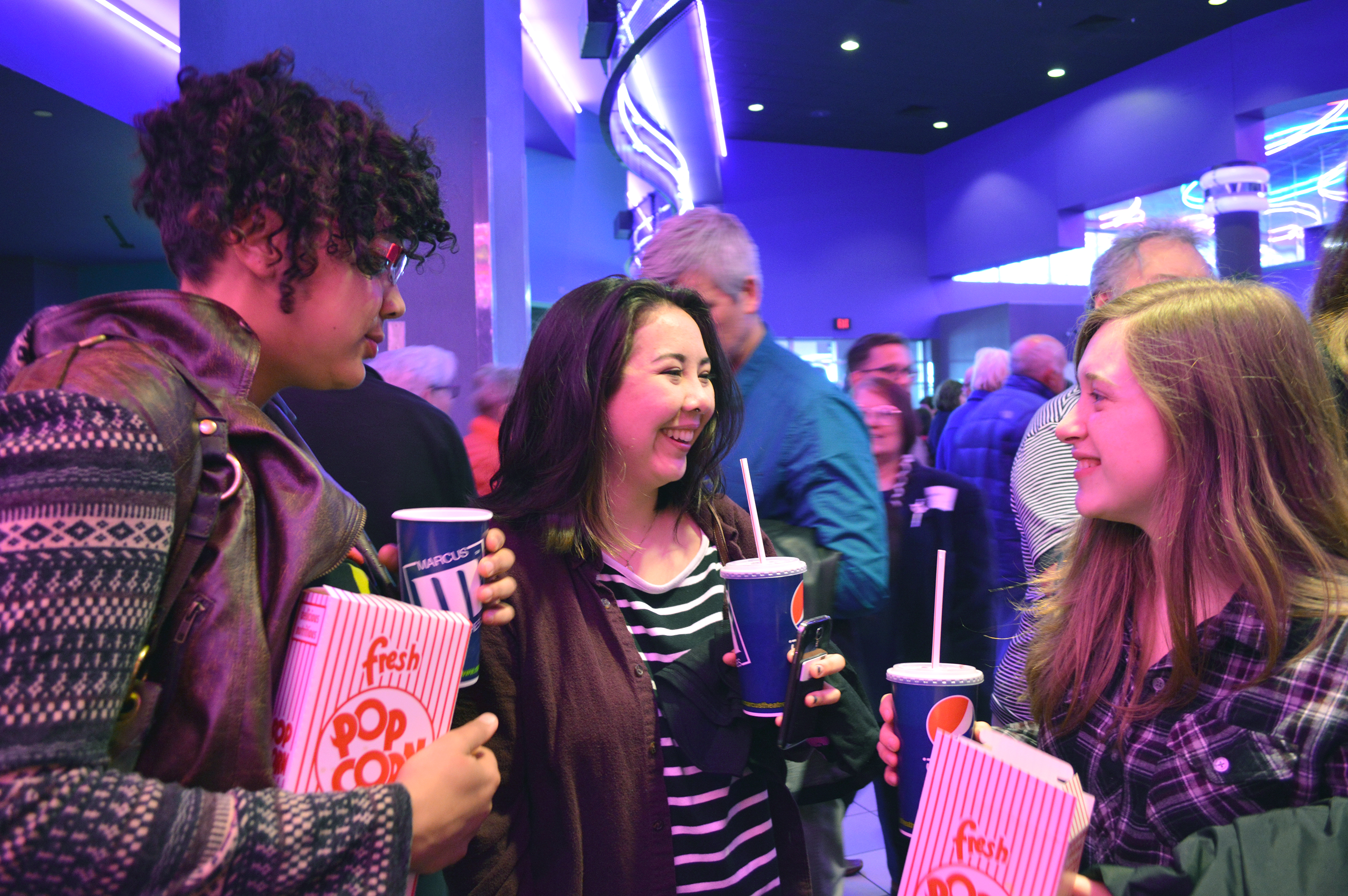 “Bucky and the Squirrels” premiered to Lawrence University students, faculty and staff, Appleton residents, and the film’s director, producers and actors last Friday, April 10. Audience members eager to view the film, shot primarily on the Lawrence campus and in Appleton, filled two theaters at the Marcus Appleton East Cinema.

The film is deeply connected to Lawrence. J. Thomas Hurvis and Julie Esch Hurvis, alumni and notoriously generous donors, oversaw the film’s production as executive producers and, according to President Mark Burstein’s introductory address before the premiere, saw to it that the filming would take place on campus and involve Lawrence students.

Those students included production assistants, a vocal coach, actors and many extras. Jill Lover, a Lawrence alumna, starred as Dr. Adams, the patient educator and caregiver to four recently defrosted members of a one-hit wonder band from the 1960s.

That band, The Squirrels, achieves and reclaims its inexplicable success at Lawrence University. This setting is undeniable; feel free to count the times you hear “Lawrence University, in beautiful Appleton, WI” throughout the film’s lengthy exposition.

This inextricable link between “Bucky and the Squirrels” and Lawrence University is really where the problems begin, at least for me. As members of the university and community depicted in—and, partially, responsible for—this film, how do we take ownership over it?

I won’t even try to talk on behalf of the student body, the university or even the Film Studies department. This issue—my identification with Lawrence University and all its squirrely baggage—seems way too personal for that.

As undergraduates, we’re here to form identities, learn valuable lessons and prepare ourselves for a world that doesn’t exist yet. We’ve entrusted Lawrence University, as a physical and psychological space, with overseeing that process.

What do we do now that our university, with which we identify our very selves, is associated with “Bucky and the Squirrels?” I can say for myself that the relationship will never be quite the same.

Steitz Hall is no longer just a chamber of mysterious scientific progress, named for a Nobel laureate and Lawrence alumnus. It will, from now on, also remain Appleton Cryonics, home to quack scientists and their childishly imagined science.

I can never ignore the brutalist architecture of the Mudd Library, now that it has been—cleverly, I’ll admit it—cast as a bureaucratic headquarters. And how can we ever move past the performance that “rocked” Stansbury Theatre, the cherished home to Cabaret, operas and more?

If “Bucky and the Squirrels” had been filmed by unknown individuals somewhere else—and I, for some inexplicable reason, saw the film—I could move on. I, and other moviegoers, might think, “Oh, I don’t know them. I don’t know these places. This film doesn’t matter to my existence other than the fact that I just consumed it.”

However, with this film, there’s no way to avoid empathy for the entire production. We know so many of the people who made it happen. Many of us were here for the filming process, so we have that personal connection to the final contents of the work. In a way, we have no choice but to care about “Bucky and the Squirrels.”

Maybe what makes that so hard to do, for me at least, is my own pride. I want Lawrence University to be outstanding, because it’s where I attend school. I am surely not an outlier in this feeling. I’d be willing to make the point that this film’s association with our school has the potential, at least, to affect our pride in our own education.

There is something about “Bucky and the Squirrels” that we can actually take pride in. Frankly, the fact that Lawrence students and professors took part in an honest-to-goodness professional film is a pretty cool start for our relatively new film studies department.

I’m also willing to make the point that this type of project is not what that department has begun to be known for. I’m not a film student, so I’m no expert, but I do have my own perceptions regarding our film program.

Thanks largely to the presence of Catherine Tatge, award-winning documentarian and producer for “Bucky and the Squirrels,” the film studies department excels in the field of socially-conscious documentation.

Productions such as the Civic Life Project or Zach Ben-Amots’ “Forgotten History,” a documentary on the experiences of black Lawrentians, do not exist to entertain us, as “Bucky and the Squirrels” does. Those projects exist to improve our society.

We as a community should continue to applaud those efforts, while learning from their final products. As for “Bucky and the Squirrels?” It will remain forever in our hearts as one of our beloved university’s frighteningly cute quirks.