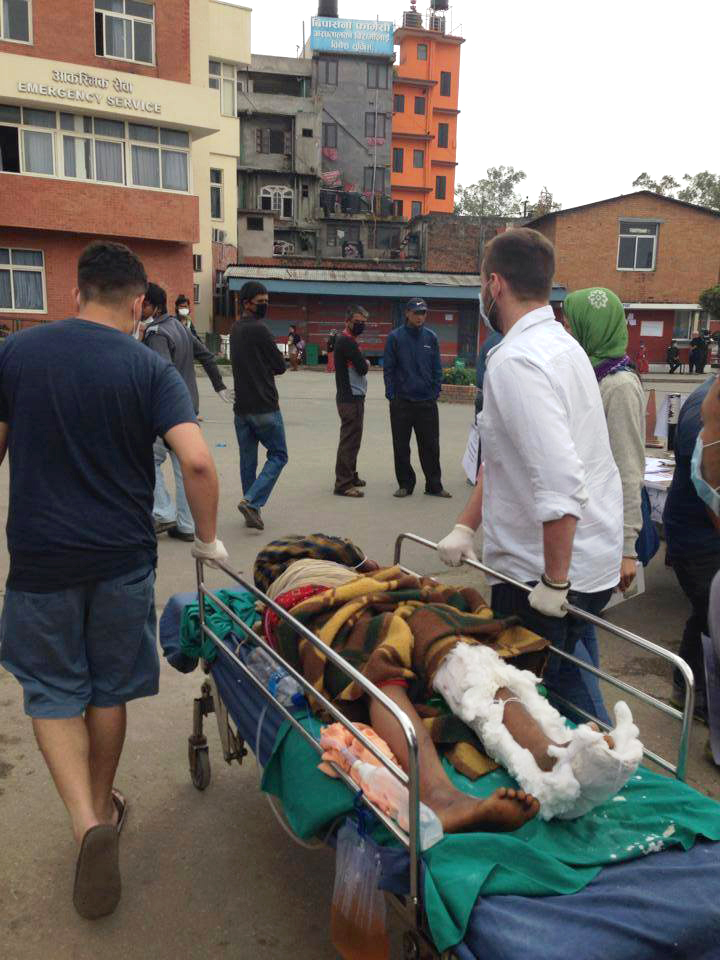 The 7.8 magnitude earthquake that hit Nepal on April 25 has left over 7,500 casualties, according to the latest reports from NBC news and the Canadian broadcaster CBC News. Among those present for the earthquake was Lawrence alumnus Anthony D. Truglia ’14. On campus, Nepalese students have expressed their concern with their country’s situation and are already taking action to help their nation.

Truglia was touring Asia and had just arrived in Kathmandu a day before the earthquake happened. “The day after I arrived in Nepal, me, Kabindra P. Dhakal [’14] and his friend Shashank Shah were having lunch on the third floor of a restaurant. I was experiencing true Nepalese cuisine for the first time. After we finished, we were drinking tea when suddenly, my tea glass started to shake,” he said.

At the moment of the disaster, Truglia was visiting his friend and fellow Lawrence alumnus Dhakal, a resident of Kathmandu. When the floor started to shake, he thought that the vibrations were coming out of a massive street parade, but later realized that nature was playing a role.

“I almost felt sideways at one point and it was difficult to stand. Our first reaction was to use the walls as support, but then we quickly decided it best to flee the building before it collapsed. Fortunately for us, the building did not collapse and the earthquake stopped just as we exited the building,” Truglia said.

The three friends survived and were able to share their shocking story. Their immediate reactions after exiting the building were to go home and check on their families. “The roads were packed with thousands of scared people. It was tough getting back to his house, but after a while we did,” Truglia said.

The volunteering efforts made by Nepal’s population and international help have proved crucial in saving many lives and keep hope in the country’s saddened environment. Truglia and Dhakal joined the efforts to help.

“Afterwards, we volunteered at the local hospital and Kabindra even gave blood. I was unable to since I had contracted Dengue fever in Sumatra a week prior. We also went to the airport on one particular day and asked for donations from those who were leaving the country. We collected food, money, tents and sleeping bags,” Truglia mentioned.

He attests that the people in the country are determined to make a change. On the other side of the world, at Lawrence University, Nepalese students joined the effort to help their country by starting a fundraising project.

Freshman Sreyendra Purush Dhakal, who was born in Kathmandu and is Kabindra Dhakal’s cousin, was just waking up when his friends informed him of what happened back home. “Yes, I was actually in my room. I think the earthquake happened at 1 p.m. in Nepal, which means that it was about 1 a.m. here … I found out about the earthquake at 8 a.m., so it was seven hours after [it].”

At first, he thought that it was a friend’s prank and that the quake had not really happened. Fortunately, Sreyendra Dhakal’s family was not physically affected by the earthquake, though they had some property damage and losses. “They were affected by it, but luckily, thank God, they were not hurt. They felt that … the earthquake was terrible and we suffered some property damage, but luckily, no one was hurt.”

Sreyendra Dhakal’s prediction for the earthquake’s immediate and long-term aftermath is that there will be a social and economic crisis. He also predicts that “… it is going to take a while for Nepal and its people to get back on their foot and be strong, but it will definitely happen.”

Freshman Nijesh Upreti, also from Nepal’s capital, confirms that his immediate family did not suffer any physical harm. “I’m unable to contact other people, so for now my immediate family is all right,” he said.

Upreti was waking up early in the morning, about 7,500 miles away from home in his college dorm, when he found out about the earthquake in his country. “ I woke up in the morning at seven and then I was just looking on my computer and saw something about Nepal and … clicked on it, and when I opened it … I was worried because the epicenter was close to Kathmandu.”

After waking up, Upreti went straight to work at the Warch Campus Center , but continued to think about Nepal’s situation. Particularly, he was extremely worried about his family because he had not heard any news from them.

“It was kind of hours … I didn’t receive any texts or calls, nothing, so I was … scared until that evening, around 9 or 10 … I sent a few texts and received [one] in Viber saying that everybody [was] okay. I tried to call them, [but] I couldn’t until the next day,” said Upreti.

He also foresees a profound economic crisis on Nepal. On the one hand, “[looking] at it from an economic perspective, Nepal is already a developing country, [and] compared to the United States, is 150 years backwards. Now that this happened, we are [an additional] 20 years backwards still to build on.”

On the other hand, “we as youths … need to … do something for our nation. We will not only focus on an economic perspective, but also on [a social one] because Nepal is in such a position that earthquakes might frequently happen, so we are going to have to think about how to build houses or how to make people aware of what to do then,” Upreti said.

By Ollin Garcia Pliego The 7.8 magnitude earthquake that hit Nepal on April 25 has left over 7,500 casualties, according to the latest reports from NBC news and the Canadian broadcaster CBC News. Among those present for the earthquake was Lawrence alumnus Anthony D. Truglia ’14. On campus, Nepalese students have expressed their concern with…