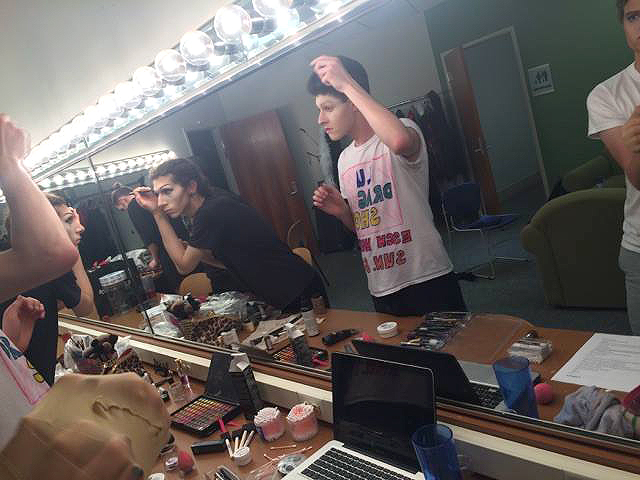 The Lawrence University Drag Show on Sunday, May 17, was made up of debut performances and returns. Overall, performers found their experiences to be very positive and empowering. The show was a fun time and an opportunity for self-expression and social commentary, different for each person.

Alumnus Marshall Cuffe ‘13, who has been participating in the drag show for three years, spoke to his experiences and thoughts on drag in general.

When asked why he chose to participate, Cuffe said that drag “forces me to examine who I am in relation to gender and … hopefully forces the audience to do that too.” As a social commentary, drag “examines what beauty is and how much of it is surface level.”

While some performers felt a drastic change in personality while in drag, Cuffe found his “day persona” and “drag persona” to not be exceptionally different. “I think you can emphasize different parts of yourself,” Cuffe said.

“Even though our sexist society has a perception of women as weaker,” Cuffe said, “men who perform in drag feel very empowered.” This notion of empowerment and liberation was a common sentiment shared by several performers.

Cuffe took on the role of mentor and guide to help other participants. “I try to make myself available and give everyone resources so they feel really prepared,” he said. At Cuffe’s first performance, no such mentor gave him guidance, but participants this year he thought, “felt better about their performances and had more fun” because there was a system of support.

Freshman Devyn Gay, a first-time performer, performed as La Gay Divine. The stage name came as a play on his last name and a high school nickname.

When asked why he decided to perform, Gay cited his previous interest in drag. He had seen drag shows in the past and said that he always thought, “I wonder if I could do that.” When presented with the opportunity to try it, Gay gladly took it.

In order to prepare, Gay spent a lot of time watching Beyoncé videos to “try to be as fierce as Beyoncé” in his dance to “Partition.” He also learned to walk in heels very quickly for the show. He said that he was “in heels for the first time three days before the show.”

Reflecting on the event, Gay found it to be a good experience, saying that it was “amazing to be a part of something” and that the drag show was “a great way to get introduced to the idea.”

Gay said that people “see a whole different person” in him after his performance. For him, he thinks that drag is “a great form of expression” and that “looking fabulous while you do it” makes it fun.

For freshman Leif Olsen, another first-time performer, the drag show gave him a chance to explore a new form of self expression as Haylee Aspen.

The persona of Haylee gave Olsen a chance to be someone different from his typical self. “Haylee is someone quiet and sultry,” Olsen explained. “I went for quiet and beautiful” while still being a big personality on stage.

The opportunity to participate in the drag show was also an opportunity to explore self-expression previously off limits. “Coming from a conservative town, it was difficult to express myself without being ostracized,” Olsen said. However, he felt that the drag show created “a safe space where people of all sexualities and genders and dispositions could come together and express themselves in a way they would like to.”

Olsen took away many positive things from his experience. “It was empowering,” he said, describing how it felt to perform. Regarding what others might think after putting himself out there, Olsen added, “I don’t really mind what people think of me because I know who I am.”

Lewis took on the name Olly “Manspreading” Murs, adopting a pun on the name of the artist whose song she performed. The help of makeup and hairstyling done by her friend Raquel Bajuscik aided Lewis in getting into character. When people “didn’t immediately recognize who I was,” said Lewis, she felt more in character.

Addressing the social commentary aspect, Lewis said, “There is stigma against women dressing masculine … like you’re automatically a lesbian … and that’s not an overarching factor.” She felt the drag show overall helped to break some of the stereotypes about sexuality and gender.

Commending the show in its entirety, Lewis remarked, “It was of high enough quality that people who would not normally go to a drag show went and loved it.”

By Nalee Praseutsack The Lawrence University Drag Show on Sunday, May 17, was made up of debut performances and returns. Overall, performers found their experiences to be very positive and empowering. The show was a fun time and an opportunity for self-expression and social commentary, different for each person. Alumnus Marshall Cuffe ‘13, who has…