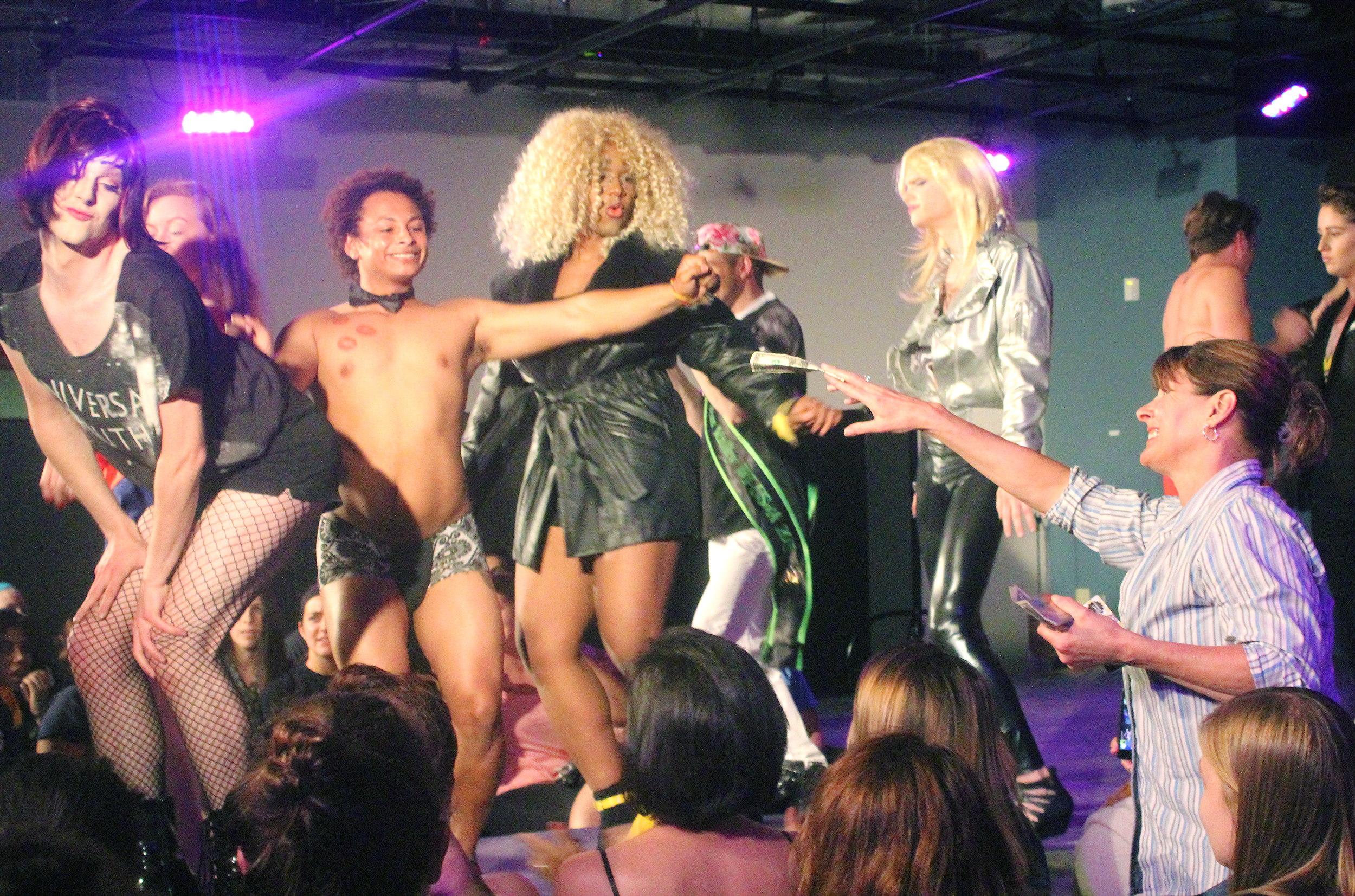 Thirteen performers strutted across a stage in the Warch Campus Center’s Esch Hurvis Room on Sunday, May 17, for the annual Lawrence University Drag Show. The show was sponsored by Gay, Lesbian or Whatever (GLOW), and was emceed by staff accompanist Marshall Cuffe ‘11. He performed under the stage name Saint Syndrome. The night’s acts included dancing, singing and rapping by both Lawrence students and performers from the larger community.

With bright lights and loud music, the show was what freshman Madeira Seaman called “a rip-roaring good time,” but it also presented an opportunity for an exploration and subversion of gender stereotypes. As Cuffe said, “drag is about forcing yourself to look past everything on the outside … and you’re forced to think about who you are, to step outside of your privilege and your stereotypes, and just be a person.”

Student drag queens performed under stage names such as La Gay Divine, Ollie, Kari Oki, Haylee Aspen, Pearl Gaily and Honey Ryder. They danced to everything from Beyoncé’s “Partition” to “Collect Your Love” by the Knocks.

Freshman Sean Geis, who appeared in two numbers as “Baby Moon,” described the drag show experience as very different from anything he had ever done, saying, “I dance, but nothing ever like that. You look in the mirror after the makeup is done and think ‘Who am I?’” Junior Forrest Jackson also appeared in the show, though he freestyle-rapped rather than dance or sing.

Although the majority of acts were Lawrence students, performers from the Fox Valley area were audience favorites. Freshman Rachel Goldstein, who served as makeup artist for many of the performers, said she was most excited to see the burlesque acts by “Belle Morte” and “Elle Mae” of Certified Sexy Burlesque, a burlesque troupe based in Oshkosh, Wisc.

Each woman performed one number on her own and then collaborated for a duet to the Neighborhood’s “Sweater Weather.” Community member Nick Jansen, named “Mr. Gay Fox Valley,” also performed two numbers using the stage name Talon.

According to Cuffe, the Lawrence drag show has grown considerably in his years of involvement—from a show watched by perhaps a hundred students to this year’s event, which he estimates drew a crowd of 400.

Audience members were encouraged to participate in the show; many passed tips to the performers, and those dressed in what Cuffe called a “gender-freaking way” were given raffle tickets and invited onstage for a walk-off. Participants shared the stage with the gender-bending stars of the night and left with a signed Lawrence University Drag Show poster.

By Nicole Mitchell Thirteen performers strutted across a stage in the Warch Campus Center’s Esch Hurvis Room on Sunday, May 17, for the annual Lawrence University Drag Show. The show was sponsored by Gay, Lesbian or Whatever (GLOW), and was emceed by staff accompanist Marshall Cuffe ‘11. He performed under the stage name Saint Syndrome.…