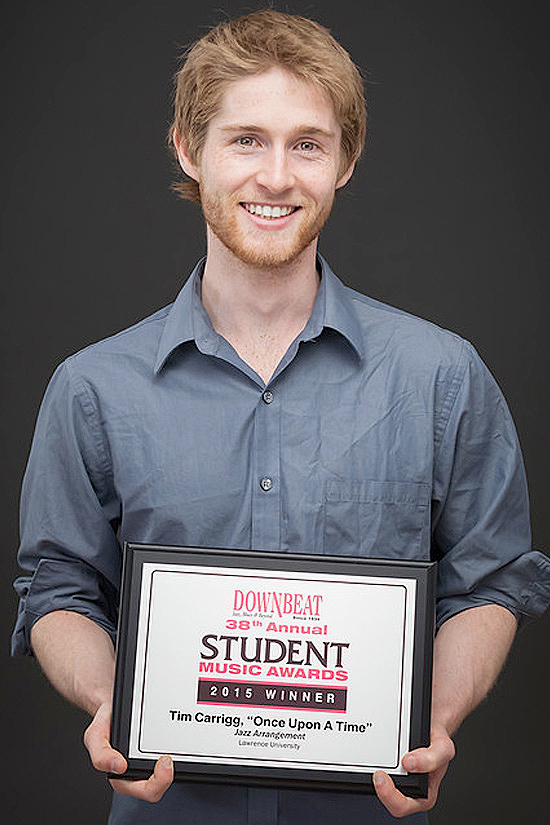 Music connects you to others, and it connects you to yourself. An appreciation for composed sounds is an internal as well as an external meditation. Lying on your bed while listening to Joni Mitchell or grooving to Michael Jackson on the dance floor—no other form of expression is quite so viscerally powerful as music.

Performing and composing music only drives this power further. It offers the practitioner a dependable source of energy, whether from playing by yourself for catharsis or playing with a group for social depth.

Senior Tim Carrigg has studied music as both a composer and a musician. With an emphasis in jazz, he has found many ways to explore music as meditation, practice, connection and energy. Having just recently been awarded a DownBeat magazine Student Music Award for Undergraduate College Jazz Arrangement, his efforts have clearly caught some people’s attention.

Carrigg grew up around music and cites it as one of the things that has made the most positive impact on his life. It started with piano lessons as a child and, while not always in love with it, he stuck with practicing until it truly became a passion for him.

“People tend to have the belief that music is mostly just a source of entertainment,” Carrigg noted, “but I think that it can also have a lot of additional benefits.”

These benefits are numerous. For one, music creates good vibes while also giving the sense of having done good work. It is a practice much like reading, jogging or meditating. Its routine creates an identity, a particular kind of positive feeling.

Carrigg terms this a “slow, cool, positive energy.” With this in mind, Carrigg went to school in order to share the experience and joy he feels when playing and composing music. He felt in learning more about music, he  would be more adept at spreading the love.

In turn, Carrigg hopes that he will affect someone else with these intentions, feelings and desires. If there is truly a collective consciousness, then surely other people must identify similarly, and he hopes to tap into those similarities.

The most significant of Carrigg’s achievements so far is “Once Upon a Time,” the big band piece that garnered him DownBeat’s recognition. Inspired by Herbie Hancock’s “Tell Me a Bedtime Story,” the piece takes Hancock as a source and develops off of it. Carrigg mixes the classic swing era style of big band music and combines it with more contemporary artists and genres until it becomes something wholly unique.

Outside music, Carrigg is interested in philanthropic work. He has been extensively involved with Habitat for Humanity since coming to Lawrence, and his post-graduate plans include a variety of personal projects intended to benefit the community with music.

After graduation, Carrigg also plans to go to graduate school, possibly to continue his jazz studies. His general mission statement is to live a life in which he can evenly balance his composition and playing.

Carrigg’s composition recital is this Sunday, May 31, at 6 p.m. in Harper Hall.

By Bryan Cebulski   Music connects you to others, and it connects you to yourself. An appreciation for composed sounds is an internal as well as an external meditation. Lying on your bed while listening to Joni Mitchell or grooving to Michael Jackson on the dance floor—no other form of expression is quite so viscerally…