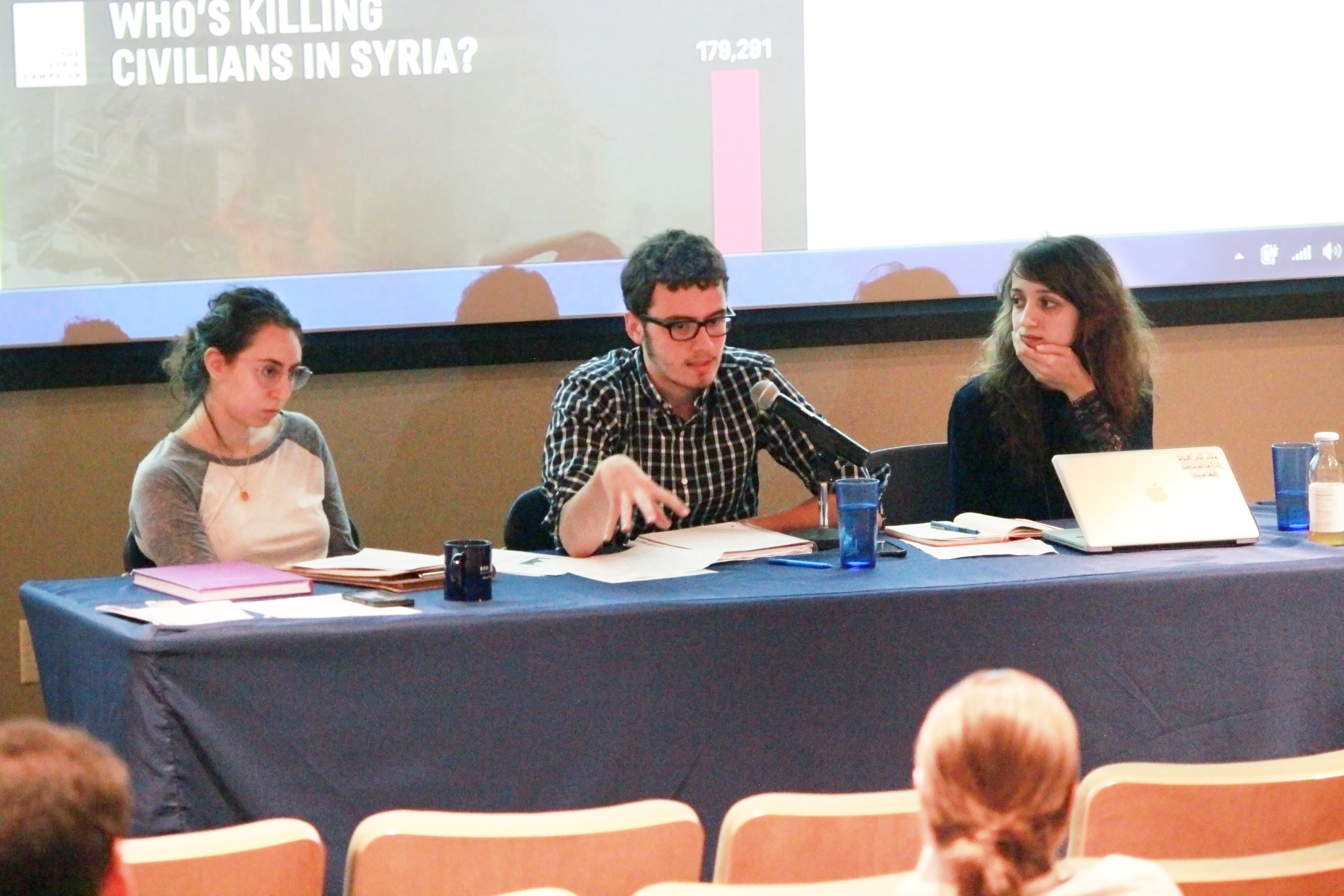 “In the U.S., academic freedom tends to be about what you can write and what you can’t write, but for many people in the world, academic freedom is just about access to education,” said senior Razan Anabtawi, who serves as co-president of Students for Justice in Palestine (SJP) at Lawrence.

She spoke at SJP’s first event of the year — a panel on the Syrian refugee crisis. It took place in the Warch Campus Center cinema at 6:30 p.m. on Monday, Sept. 28. Anabtawi was joined on the panel by junior and SJP co-president Tamara Nassar and sophomore and SJP vice president Mahmoud Shaar.

Around 30 students attended the 90-minute session. The panelists explained the causes and effects of a civil war which, according to Shaar, has displaced 12.1 million Syrians since the conflict began in March of 2011.

In addition to such distressing statistics, the panelists shared poems written by refugees and engaged the audience in an interactive simulation of some of the incredibly difficult choices that Syrians seeking asylum must confront.

Anabtawi explained that SJP felt compelled to speak out on the Syrian crisis because of the shared history of displacement between Palestinians and Syrians. Shaar added that during “a humanitarian crisis of this size … being insensitive to the plight of [the refugees] is very dangerous, because the environment that they are in […] is what makes extremists, if not handled well.”

The panelists positioned access to education as an important part of stopping the spread of extremism. Educated refugees have more options to support themselves in their countries of asylum and are less likely to join militias as a means of income.

The panelists then introduced a fundraiser for Jusoor, a Montreal-based organization that provides Syrian refugees with scholarships to continue their education abroad. Shaar has a personal connection to the organization, as Jusoor provided the scholarship that enables him to attend Lawrence. SJP tabled for the rest of the week to raise funds.

Reactions to the panel were generally positive. Sophomore Oswaldo Gomez said he “definitely” felt more informed after attending and as a result, plans to get more involved with SJP in the future. “The panel was great. I really enjoyed the discussions of the facts, but also […] the poems and letters. It really touched a deeper meaning,” Gomez stated.

Senior Camille Dozier, who came to the panel because she believed she “should learn more” about the refugee crisis, appreciated “hearing people’s questions” and felt that “at this panel in particular, people had really good questions.”

By Nicole Mitchell “In the U.S., academic freedom tends to be about what you can write and what you can’t write, but for many people in the world, academic freedom is just about access to education,” said senior Razan Anabtawi, who serves as co-president of Students for Justice in Palestine (SJP) at Lawrence. She spoke…