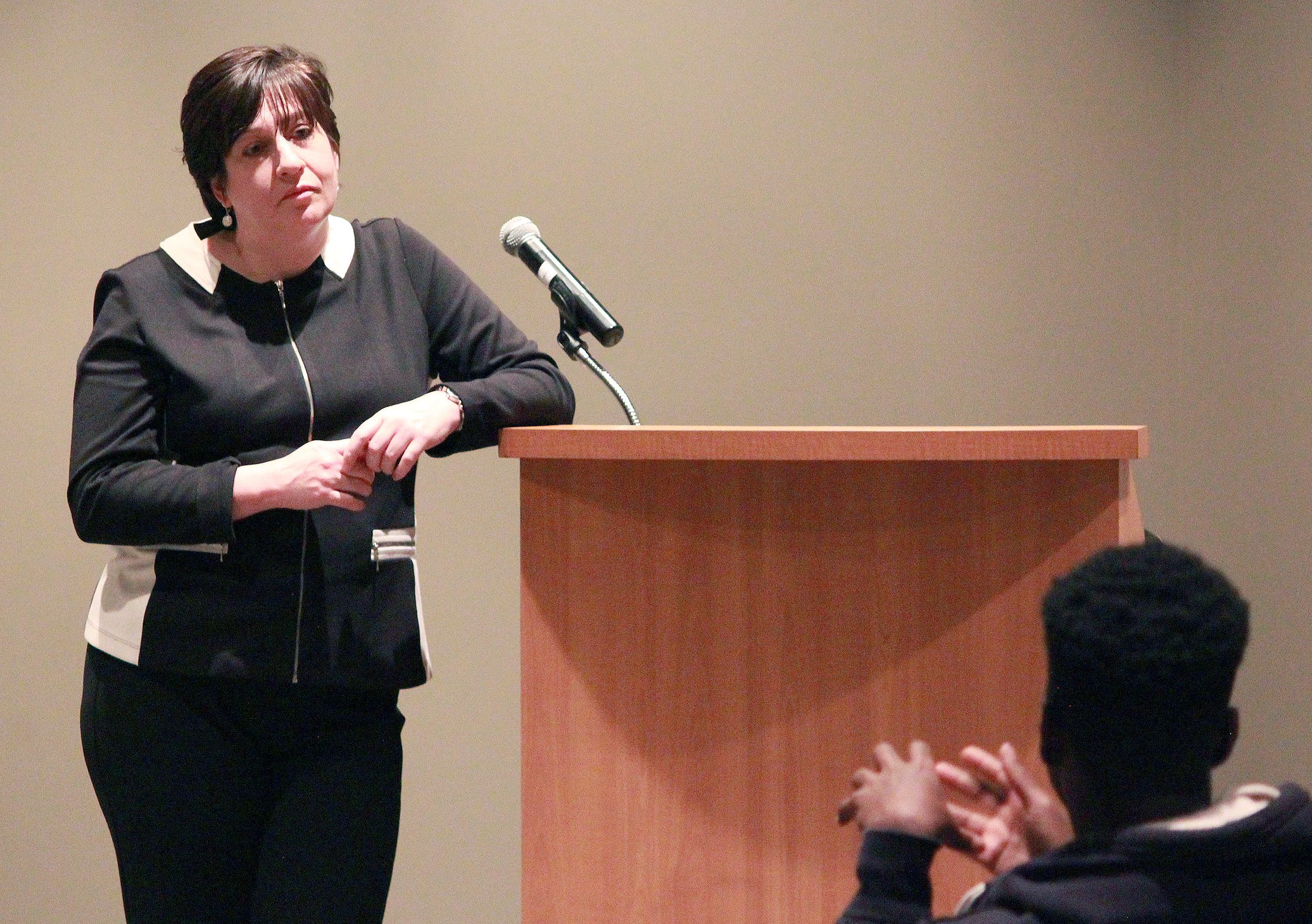 On Tuesday, Oct. 27 at 7 p.m. in the Warch Campus Center cinema, Audrey Geyer, director of “Our Fire Still Burns: the Native American Experience,” held a question and answer conversation. Her film screened in the cinema during the three days prior to her visit on campus. The event was hosted by the Office of Multicultural Affairs (OMA).

The hour-long documentary focuses on the lives of contemporary Native American figures in the U.S. Midwest, including a businessman, a journalist and a youth advocate. Those interviewed in the film discuss how they continue to heal from the past, keep their culture alive, and how they use ancestral teachings for education and social change. The film sheds light on the history of American Indian boarding schools and how families today continue to be impacted by the historical trauma.

During the hour-long session, Geyer discussed her background and experience with the documentary, and encouraged students to share their own personal stories.

Geyer described her impetus for the project being a class she took in high school that dispelled her preconceived notions about Native Americans. “I’m not Native American, so it’s even more unusual that I would be drawn to this topic. But in some ways it’s not unusual because I think we as people are more alike than different,” said Geyer.

Geyer continued, “All these years later, a seed was planted in me. I was so shocked and angry and in disbelief about our American history in relationship to Native Americans, and how falsely it’s been presented to us, what has been omitted so much from our books growing up and being educated in public schools and private schools.”

Geyer described her introduction to the Saginaw Chippewa Indian Tribe in Mount Pleasant along with the importance of developing relationships and understanding the fear and distrust of participants in any artistic practice.

Native students in the room shared their personal experiences with education and engaging in cultural traditions. Students discussed the lack of information on Native Americans in history textbooks, the misrepresentation of Native Americans in the mainstream media and the historical trauma that many families experience. Many of the participants emphasized the importance of not lumping Native Americans into one category, especially since each tribe has a distinct culture and heritage.

Associate Professor of Music Brigetta Miller commented, “There are 567 federally recognized tribes in the United States, each with their own individual histories. We have many Native American Lawrence students here tonight that each have a different story and a different school experience”.

Assistant Dean of Students for Multicultural Affairs Pa Lee Moua felt the film and discussion was a great educational opportunity for students. “I think it’s important to find different ways to educate and inform others, so a film documentary is something different that OMA hasn’t done this year yet. Plus, with November being Native American Heritage Month, the timing would be great to spark and continue conversations about history, traditions and cultures [that] still affect people today, especially since the film is focused on Native Americans in the Midwest.”

On Tuesday, Oct. 27 at 7 p.m. in the Warch Campus Center cinema, Audrey Geyer, director of “Our Fire Still Burns: the Native American Experience,” held a question and answer conversation. Her film screened in the cinema during the three days prior to her visit on campus. The event was hosted by the Office of…