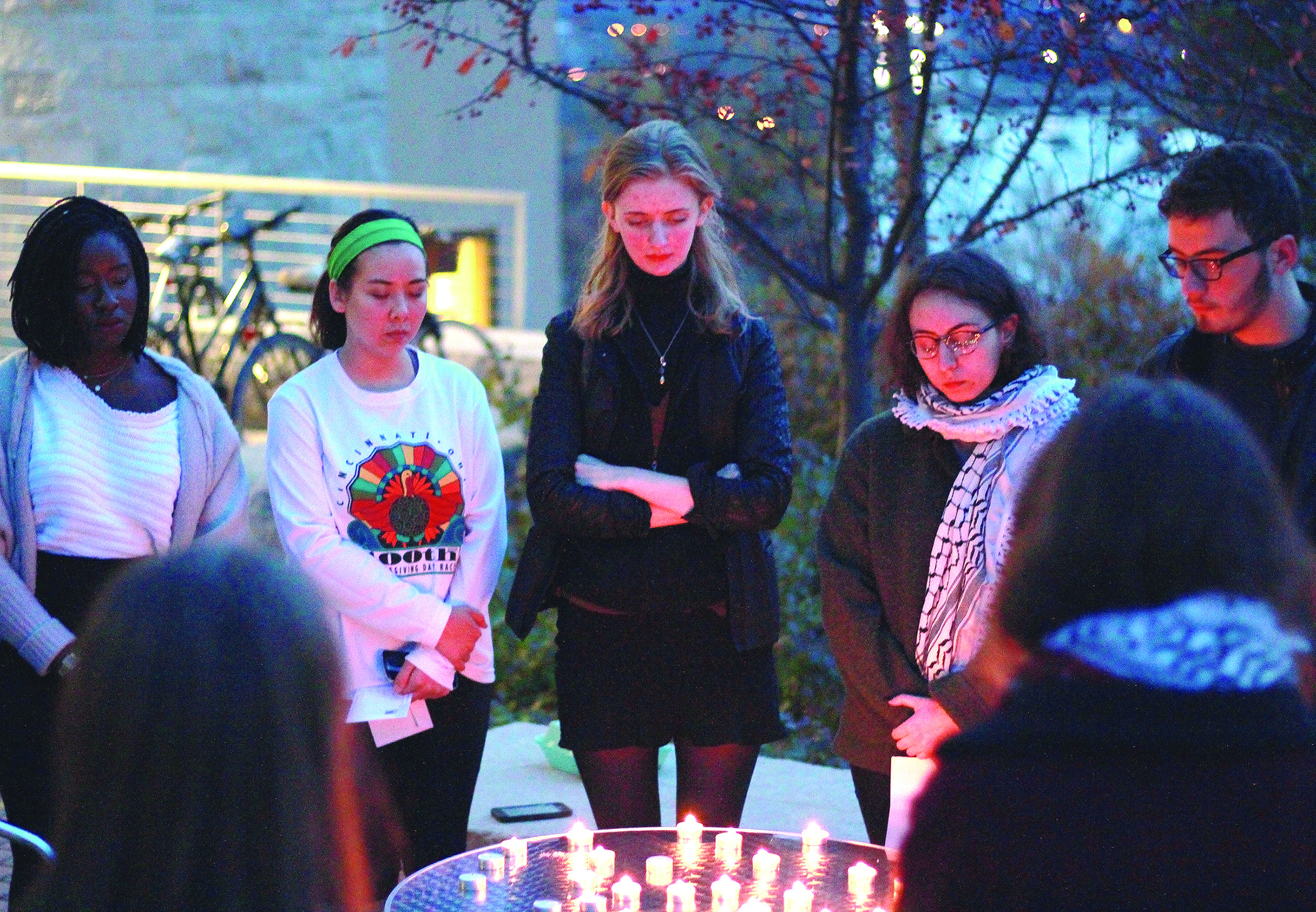 In the evening on Monday, Oct. 26, many Lawrentians walked noisily through the doors of the Warch Campus Center, chatting as they headed to and from dinner. Yet, clustered around a tabletop covered in tea lights, one group was silent and still. The small crowd stood at a candlelight vigil to protest the Israeli occupation of Palestine, and to honor the seven Israelis and at least 31 Palestinians who have been killed since Oct. 1.

The vigil was held by Students for Justice in Palestine (SJP), and opened with a poem read by junior and SJP Co-president Tamara Nassar. The names and stories of those who died were then read aloud before silence fell. Photos of the deceased hung around campus and were also displayed by students at the vigil. Significantly, the pictures showed the dead not as they died, but as they lived, in pictures chosen by their families and showing things they were proud of.

Sophomore and SJP Vice President Mahmoud Shar, speaking about what the vigil meant to him, said, “There’s been a bunch of videos online that show how a lot of these people died, and I’ve been avoiding watching them because I did not want to see people die, but then I did watch them, and it was the first time I cried in three years. With this vigil, I hope I will think of [the victims] in a different way.”

Senior and SJP Co-president Razan Anabtawi added that the vigil meant “taking a moment from my day to forget about everything I have to do and remember what is going on at home. Even though I’m here now, there’s another place I need to be.”

Though the night of the vigil was one of peace and healing, the event was not without controversy. On the Facebook page that SJP created for the event, senior Eli Kassel wrote, “Can I ask who exactly this vigil is honoring? Over 20 of the Palestinians who have been killed since the beginning of the month were killed while attacking Israeli civilians and police, or in the immediate aftermath. When you say that the vigil is ‘to honor the lives lost in the struggle for liberation from the Israeli occupation,’ does this mean you are honoring those who have died in the process of murdering/attempting to murder Jews in Israel, or does it mean you are honoring Palestinian noncombatants who have been killed in the conflict?”

Addressing this controversy, as well as other backlash that SJP has received, Anabtawi stated, “This event relates to one of the biggest misconceptions about our group on campus. We are against the occupation; we are an advocacy group for Palestinians against the occupation, but we are also for anyone harmed by the occupation.” She emphasized that this includes Israelis as well as Palestinians. Shar added that although SJP has faced backlash, they are above all trying to educate people and will continue to do so, “because that is what activism is all about.” 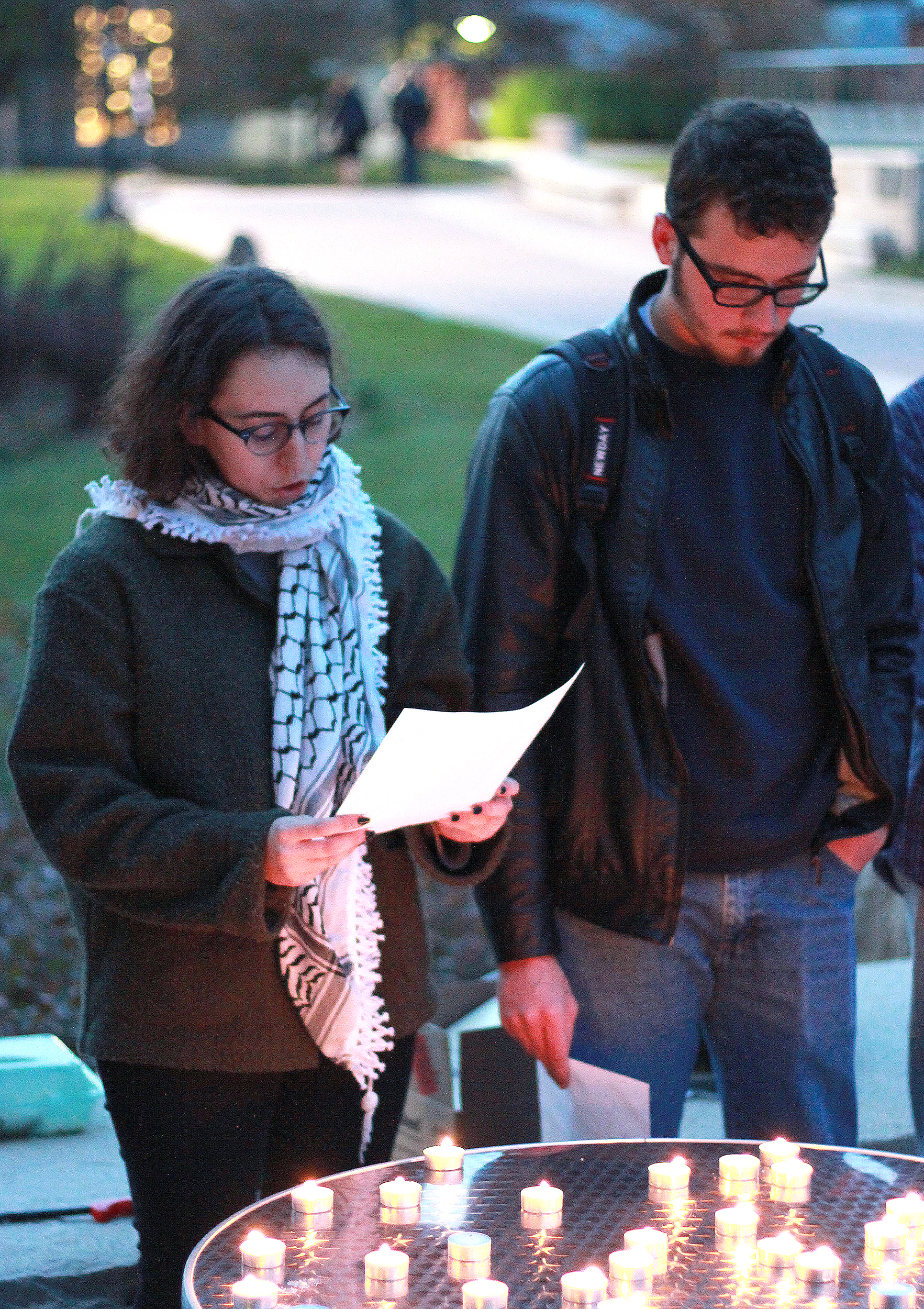 By Nicole Mitchell In the evening on Monday, Oct. 26, many Lawrentians walked noisily through the doors of the Warch Campus Center, chatting as they headed to and from dinner. Yet, clustered around a tabletop covered in tea lights, one group was silent and still. The small crowd stood at a candlelight vigil to protest…