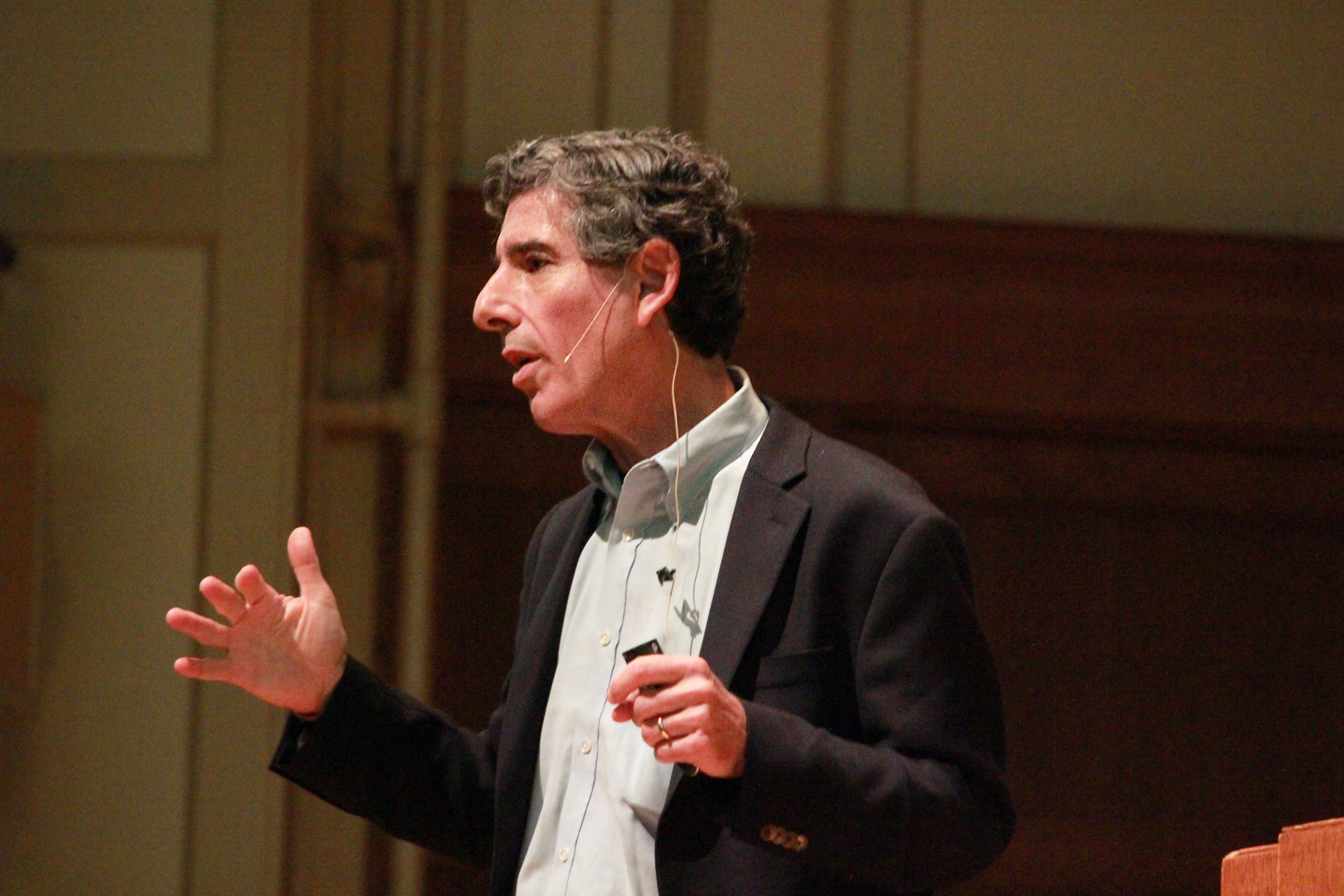 William James and Vilas Professor of Psychology and Psychiatry Richard Davidson, an expert in neuroscience at the University of Wisconsin-Madison, gave a lecture titled “Well-Being is a Skill” on Thursday, Oct. 28, from 11:10 a.m. to 12:30 p.m. in Memorial Chapel. The lecture was free and open to all members of the community and was part of two lecture series sponsored by a grant from the Mellon Foundation.

The Liberal Arts in the Century of the Brain Series is organized by neuroscience and cognitive science faculty interested in how neuroscience research and cognitive studies can help better understand the humanities. New imaging technologies and the questions concerning brain function that arise from them were considerations in the development of the series. The Contemplative Studies Series is coordinated by faculty from various University departments. They are focused on the development of an interdisciplinary area in the burgeoning discipline of Contemplative Studies. In their grant proposal, the group explained, “Contemplative Studies” refers to a range of practices and perspectives that promote an integration of modes of knowing whereby the abstract and rational faculties that are the mainstay of higher education are balanced and complemented by the subjective, reflective, intuitive and experiential.”

Richard Davidson is an internationally recognized neuroscientist and expert on the impact of contemplative practices. Davidson is the William James and Vilas Research Professor of Psychology and Psychiatry and the Director of the Waisman Laboratory for Brain Imaging and Behavior at the University of Wisconsin-Madison. Additionally, he founded the Center for Investigating Healthy Minds at UW Madison. His research investigates “neural bases of emotion and methods to promote human flourishing including meditation and related contemplative practices.”

In addition to being an author of numerous scientific publications and books, Davidson has conducted influential research. He has worked closely with the Dalai Lama, the spiritual leader of Tibet, in studying the effects of meditation on the brains of trained monks. The American Psychological Association awarded him the Distinguished Scientific Contribution Award in 2000, and Time magazine named him one of the 100 Most Influential People in 2006.

Davidson’s lecture explored the question of why people have differences in resilience in the face of adversity. He explained that while the “slings and arrows of life” cannot be avoided, each person can take control of their own mind. The lecture emphasized the importance of studying the effects of kindness and compassion on the mind and body.

Davidson highlighted the important relationship between contemplative practices and scientific studies. He cited neuroplasticity (the ability of the brain to change and adapt), epigenetics (the science of how genes are regulated), communication between the brain and the body, and innate basic goodness (the bias for altruism) as areas that connect contemplative practices and scientific research. An example given of research on innate basic goodness was tracking the response of babies to videos. One video demonstrated a helpful interaction while the other demonstrated a hindering interaction. Infrared lasers tracking the baby’s eye movements showed that babies strongly preferred to look at the helper video.

Davidson also demonstrated how contemplative practices can affect the brain. In his studies on Tibetan monks, Davidson showed how meditation induced brain patterns similar to those seen in deep sleep. Additionally, he explained four elements of well-being connected to the mind. They included resilience (rate of recovery from adversity), outlook (how positively or negatively one sees the world), attention, and generosity. Davidson showed how contemplative practices can help the mind control elements of well-being. He explained a study showing that meditation improved people’s attention and focus. Furthermore, he showed how control over elements of well-being affects individuals. One study demonstrated that children with more self-control at an early age had greater success, better health and greater happiness as adults than children with less control.

Sophomore and intended neuroscience major Janey Degnan, appreciated the lecture’s modern, scientific perspective reaffirming the benefits of age-old practices. She remarked, “I especially liked how [he showed] his research [has] scientifically measured the effects of practices like meditation.” She went on to comment how the lecture could generate more awareness of meditation and its benefits.

Assistant Professor of Psychology Lori Hilt also recognized potentially beneficial topics for students in the lecture. She commented how she hoped the lecture will “lead to further discussions on campus about neuroscience and what it can help us understand.” She added, “I also hope that it can lead to discussions about contemplative practices that may help with individual stress regulation and greater interpersonal understanding and compassion.”

By Hannah Kinzer William James and Vilas Professor of Psychology and Psychiatry Richard Davidson, an expert in neuroscience at the University of Wisconsin-Madison, gave a lecture titled “Well-Being is a Skill” on Thursday, Oct. 28, from 11:10 a.m. to 12:30 p.m. in Memorial Chapel. The lecture was free and open to all members of the community…