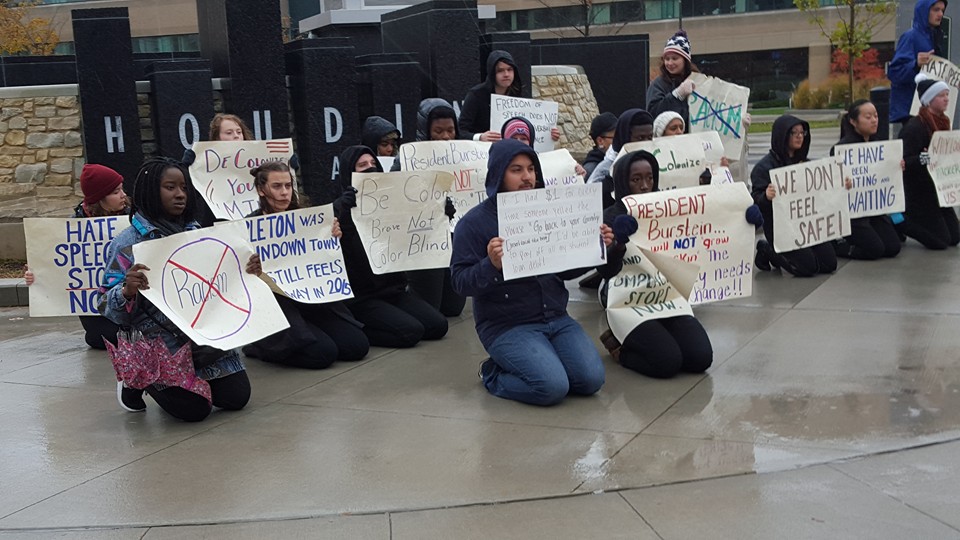 “I don’t feel safe in Appleton, Wisconsin,” said Senior Oumou Cisse, explaining her motivation for organizing the protest that took place in the Appleton City Center plaza and on College Ave. last Saturday, Oct. 31. “We really need to reevaluate our integrity as an institution and as a community if we say we value our students of color and want to retain them,” continued Cisse.

“Racism is a real issue that is harming this community and this institution…This is very much an everyday reality for many students here and it is just being swept under the rug like many other social justice issues that continue to be dealt with,” said Cisse. Cisse cited an article published by the Root in November of last year titled “The 5 Worst States for Black People,” explaining that Wisconsin is one of the worst states for black people to live, due to disproportionate incarceration rates, poor education rates and segregation of the black community, among other factors.

The protest included about 20 Lawrence students of various backgrounds. However, the shared sentiment was clear: Appleton does not feel safe, and Lawrence has not responded with adequate measures to ensure the safety of students of color in the community.

Senior Jaime Gonzalez was one of the students who participated in Saturday’s protest, marching up and down College Ave. in the rain and, at one point, into City Council chambers.

“[…] As [a] person who receives racist and hateful comments from the Appleton community while on College Avenue and throughout the Fox Valley, I wanted the community to know that we are tired of the harassment and things need to change,” said Gonzalez.

“I think Appleton and Lawrence do a great job of working together on collaborative efforts that benefit each other in terms of volunteerism, internships and events but it doesn’t do a good job of addressing issues of racism, homophobia and transphobia in relation to the safety of Lawrence students,” he continued, explaining the apparent conflict of ideologies visible between Lawrence and the Appleton community regarding issues of social justice.

Cisse believes that the next step after the protest is a series of conversations, both among Lawrence community members and the city of Appleton in general. “All of these [negative] comments heard during the protest and written online reaffirm experiences of many students of color and show how crucial events like this are, because we do have people in our community that really don’t want us to be here,” said Cisse. “[…] this needs to end now. We are tired of waiting for things to change.”

In response to the event, President Burstein has asked Lawrence students of color to attend a dinner and conversation on Tuesday, Nov. 17 at Sankofa House.

“I don’t feel safe in Appleton, Wisconsin,” said Senior Oumou Cisse, explaining her motivation for organizing the protest that took place in the Appleton City Center plaza and on College Ave. last Saturday, Oct. 31. “We really need to reevaluate our integrity as an institution and as a community if we say we value our…