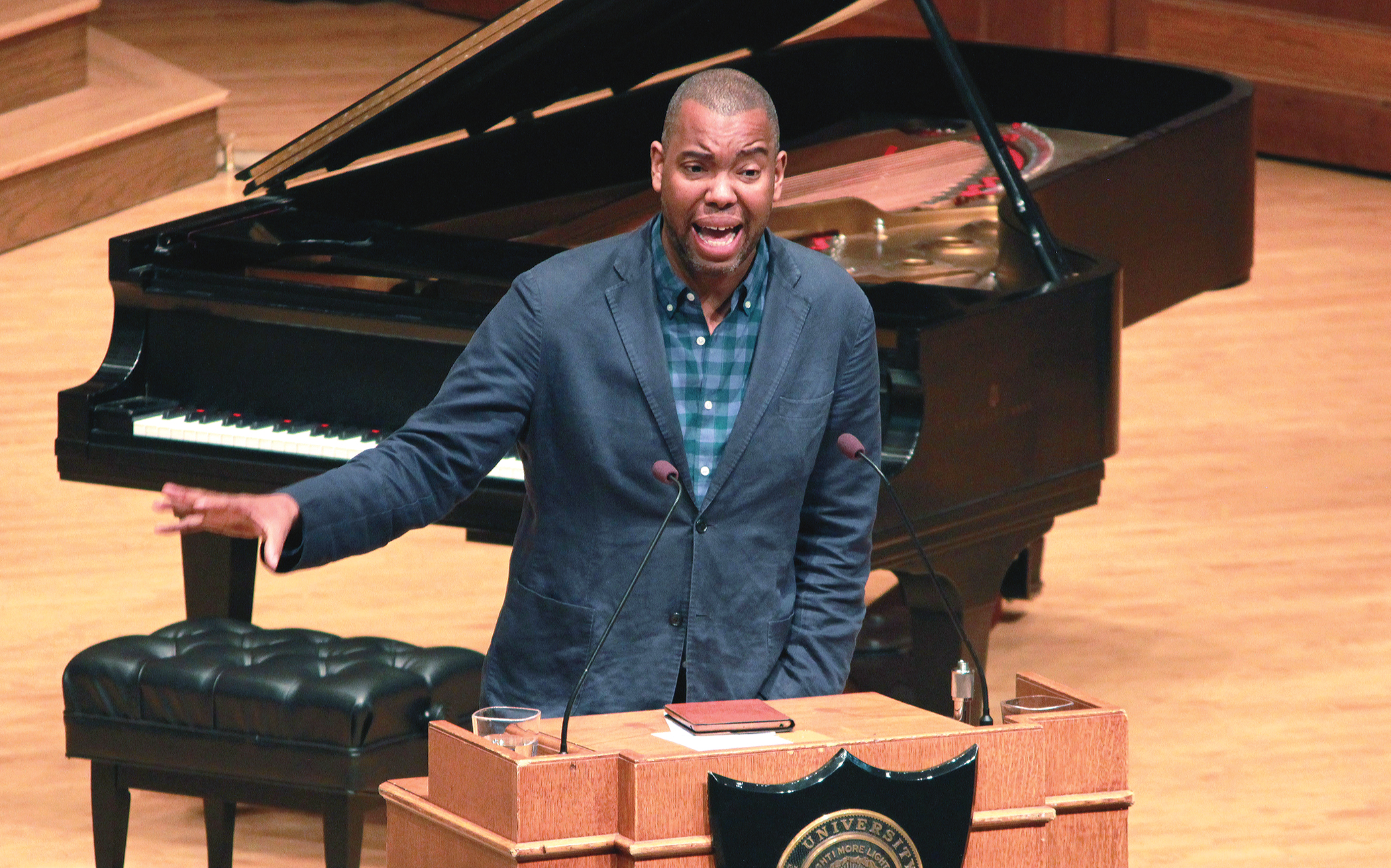 Ta-Nehisi Coates, known for work such as “The Case for Reparations” and this year’s “Between the World and Me,” which has been shortlisted for the National Book Award and acclaimed by figures such as Toni Morrison to Jay-Z, visited Lawrence on Thursday, Nov. 5 to deliver a convocation titled “Race in America: A Deeper Black.” Coates’ writing and what he calls the “Struggle,” is not, he emphasizes, the same as “hope” or “the dream.” They are altogether different, more pragmatic, more focused on what can be done now and in the future, rather than idealism.

Before speaking to the packed and nearly overflowing Lawrence Memorial Chapel, Coates met Lawrence students in a private RSVP-necessary session on Wednesday, Nov. 4 in the Warch Campus Center cinema. Coates jokingly quipped after getting two rounds of applause that he was more than satisfied with the first one.

What Coates said, and what has made him into a figure of such acclaim and attention, is a simple yet deeply uncensored claim: the concept that the bodies of black people in America, since before this nation was even founded, do not belong to black Americans and are constantly at risk for destruction in a variety of forms. As he explained, black people have been enslaved, exploited and discriminated against for much longer than they have been free in this country, and what freedom they have had since the Emancipation of Lincoln’s time has been compromised by Jim Crow, sharecropping, segregation and racist policies that range from the drug wars to unfair housing practices to mass incarceration. As Coates wrote in “Between the World and Me,” “[In America] it is traditional to destroy the black body—it is heritage.”

Coates spoke about Prince Carmen Jones, a friend from his days at Howard University who was followed by disguised police officers through three jurisdictions and who did not identify themselves when they confronted and shot him. Coates lamented on the lost promise, on the loss of a person who through his life and the lives of his family had been utterly loyal to America, had been the “twice as good” that was necessary for his family to chase the American Dream, and who had been destroyed by a presumption made by the police officers who killed him.

What is truly horrific, Coates said, is that this example is nothing unique. As Coates told it, what happened to Jones could have easily happened to him, to anyone, just based upon a presumption and the will of a system that is centuries old.

Coates admits that he does not know the answer to that question. He offered suggestions, yes: reparations and systemic overhauls among them, but speaking in the Chapel and the Warch cinema, he admitted his limits and his assumptions. Coates spoke of growing up in a previous generation, of segregated west Baltimore, of the historically black Howard University and of an age before social media. Coates admitted there are experiences beyond his knowledge. He cannot tell us what to do to improve Appleton simply because it’s outside of his personal experience. It is, he spoke in those rooms, the responsibility of the generation that composed the majority of his audience.

These words come at a particularly tense time, with the recent protests by Lawrence students against racism in Appleton and the lack of initiative the administration has taken regarding it. Coates spoke about the forces of racism and how centuries of history and conditioning lead men and women to hurt each other, not as person to person, but as representations of larger ideals. “Until we reckon with our compounding moral debts,” writes Coates, “America will never be whole.”

Ta-Nehisi Coates, known for work such as “The Case for Reparations” and this year’s “Between the World and Me,” which has been shortlisted for the National Book Award and acclaimed by figures such as Toni Morrison to Jay-Z, visited Lawrence on Thursday, Nov. 5 to deliver a convocation titled “Race in America: A Deeper Black.”…